Living with a Fatal Flaw

Here is a GUEST POST by a djinn-romance writer worthy of your attention, posted by Jacqueline Lichtenberg but written by K. F. Zuzulo

K. F. Zuzulo is the author of A Genie in the House of Saud: Zubis Rises. This supernatural thriller was a winner in the 2008 Next Generation Indie Book Awards. Her genie romance novella, The Third Wish, was published by Sapphire Blue Publishing in June 2009. You can find out more information about the author, her writing, and the djinn at www.kfzuzulo.com.

We want our heroes to be heroic. We want them to have skills and abilities beyond your typical protagonist. Since The Epic of Gilgamesh was first told more than 5,000 years ago (the first historic romance in history), readers have looked to a main character’s strength or insight, virtue or tenacity to place them above the average. To be nearly perfect…but not totally perfect. In which case, we as the readers would have to dismiss that character as totally unbelievable.

Whether human or alien, djinni or elemental, the protagonist must have nobility of heroic enterprise served up with a soupçon of vulnerability. The fatal flaw is the quintessential element for bringing the protagonist to life. In The Epic of Gilgamesh, our hero Gilgamesh could not reconcile his abilities and strength and all the power he commanded with the death of his companion Enkidu. Gilgamesh exhibits the vanity of the hero's quest and the folly of the pursuit of immortality. His fatal flaw.

As described by Aristotle, the fatal flaw is most assuredly fatal. The protagonist must possess goodness, superiority, a tragic flaw, and a realization of both his flaw and that his tragic demise is inevitable. Well, in this day and age, that sort of fatalist angst isn’t going to sell a lot of books. Yes, we want our heroes to be sympathetic in some manner, but we don’t want them to die. We want them to struggle and to triumph over the antagonist and themselves. And we want to read the next book in the series.

When your characters are super-normal or supernatural to begin with—such as aliens who hail from distant solar systems or creatures of flame and air who travel parallel dimensions, or humans who possess uncanny, superhuman skills—the task of inserting that fatal flaw can be more difficult. However, it also can be more fun. As long as the worldbuilding foundation that the author creates can support it, your hero can do and say anything he or she wants. You want your reader to be on the edge of his or her seat, waiting for the behavior of the hero to be his undoing. In this manner, too, our hero encounters the depths of despair (loss of love, misunderstood communication, pride leading to separation, etc.) and must struggle all the more to redeem him/herself.

When we talk about the supernatural hero, magical skills and idiosyncrasies must be established early on and closely followed. A reader wants to get the sense that the character is someone they can understand. The only way for that to happen would be if the author knows their character as well as or better than she knows herself. Additionally, that character must be limited in a way that the reader is privy to and understands. The fatal flaw again. So if, for instance, our hero Shazam has a fiery temper that can erupt without warning, the reader needs to be given glimpses of that before the actual eruption. It builds tension, as well as an affinity for what Shazam is thinking and feeling.

The fatal flaw is an internal trigger that threatens the hero. Also exciting and equally fun to write is the external trigger or an Achilles Heel. Think Superman and Kyptonite. Established superstitions can be a great place to start when trying to identify a cogent Achilles Heel. 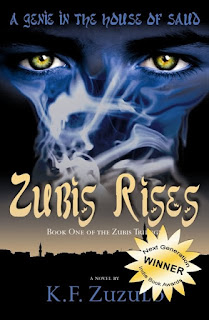 I happen to write fiction about the djinn.

It is well established in djinn lore that they are repelled by iron or by the hairs of a black-and-white cat that are burned in a bowl to smudge a room with scent. When the author places such items as these in conspicuous settings, the suspense is heightened.

Again, however, the worldbuilding is essential in these cases to support the delivery of these items in a scene. The author must establish the validity of that piece of iron being beneath the feather-down mattress of our hero djinni who is about lay upon it. And the author also needs to build in a believable exit route. Ultimately, we want our hero to stumble far from the Kryptonite, regain his vigor and live to be a part of another tale—perhaps damaged, definitely changed and, most assuredly, alive.

Aristotle may not mind killing off his heroes. But the smart, modern author keeps them alive to live another scene – fatal flaws and all.