Worldbuilding/Influences -- How fast does your world spin?

Since my headline suggests a scientific bent, let's get that out of the way first.

<< The speed at which the earth spins varies upon your latitudinal location on the planet. If you're standing at the north pole, the speed is almost zero but at the equator, where the circumference of the earth is greatest, the speed is about 1,038 miles per hour (1,670 kph). The mid-latitudes of the U.S. and Europe speed along at 700 to 900 mph (1125 to 1450 kph) >>

Other links on this excellent site http://geography.about.com/lr/earth_speed/412208/2/ will tell you the effect of seizmic activity on the speed of Earth's rotation, and wobble...

Gosh! "Wobble". Maybe the poles have shifted ever so slightly, which explains the change in the climate. (And maybe most people reading this know that.) I privately suspected it before reading Matt Rosenberg's posting dated Jan 5th 2005 about an extra inch of tilt on Earth's axis.

Alternative answers to how fast our world spins:
http://www.funtrivia.com/askft/Question75533.html

Apparently, if the Earth stopped spinning, the atmosphere would continue to travel (would that be an inertia effect?) at approximately 1,000 mph and everything not anchored to bedrock would be pulled off the face of the Earth!
http://ask.yahoo.com/20020411.html

I read in a newspaper (July 19th 2009) that scientists at France's Bureau de Longitude have concluded that the Moon is 238,857 miles away... and that advanced life could not have emerged here, 3.8 billion years ago, if the Moon had been at any other distance.

On a NASA site on the internet http://image.gsfc.nasa.gov/poetry/ask/q1733.html a scientist says that, if the Moon were closer to Earth than it is our tides would be higher (and lower), our days would be shorter, there would be 410 days in a year, and our world would spin faster. The premise is that 900 million years ago, the Moon was 21,250 miles away. 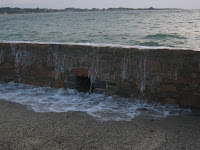 Enough of links already! Put too many in a blog, and one confuses the bots.

However, asking a simple question online can lead to all manner of thought-starters for an alien romance author. The other thing to notice is that you cannot trust one source for your research. That is another fabulous reason for giving attribution to your sources.

More food for thought: what might have happened if the Russian volcano that erupted in mid June (causing red skies at night over Britain in the week of July 14th, and perhaps the most extraordinary flight of "C-shaped" clouds which I failed to capture on film) had coincided with a full moon and 9.9 meter tides? Assuming that that which affects tidal flow affects human fertility. 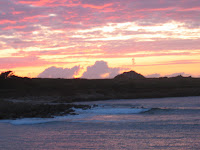 As an author of alien Romances, my interest isn't so much in the numbers as in the effects of spin on my characters. I wonder whether the pace of life is different for everyone on holiday, or whether some people live at a frenetic pace no matter where they are.

In Europe, Americans are undeservedly notorious for whistle-stop tours of tourist sites, kind of like a scavenger hunt with the aim being to check off as many items from a list as quickly as possible. Maybe that's not fair.

Germans have a unfair reputation for "bagging" and "hogging" the best sunning spots on the beaches or beside hotel pools. Apparently a holiday firm now offers German clients the option of paying a fee to reserve the best sun loungers by hotel pools. This book-the-best-poolside-seat is not offered to other nationalities.

I minded the latter sort of thing less (yes, someone ignored the significance of my beach bag on a choice patch of sand while I was in the sea, and pitched their wind break and tent and towels and toys where I had planned to dry myself in the sun) when I am in Guernsey.

One definitely lives at a much more easygoing pace when the speed limit is between 15mph and 35mph, when some roads are so narrow that oncoming traffic has to pull into a field entrance to let the other by, and where it's a routine courtesy to flatten the mirrors on your driver's side doors to let oncoming traffic pass. And, when you look up from time to time, and notice (from where the con trails are, and what the upper atmosphere winds are doing to them) where the jet stream is.

Since I started writing about the young tearaway Prince Thorquentin (and his talent for creating computer programs to disguise large alien spacecraft as convincing cloud masses), I've been taking a greater interest in clouds. One has to be really quick on the draw sometimes. Rearing bears, gaping Tyrannosaurs, snapping bats, mating crabs, monstrous prophets with outstretched arms... they don't stay in shape for very long. 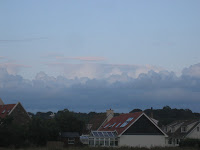 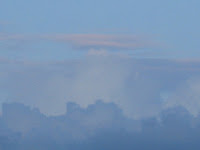