Glimpse of a Reviewer's Life

On Amazon, you'll see the little VINE VOICE icon by my reviews because I'm in the program where they offer (by an email list) books and other things to reviewers, free, and in turn the reviewer has to review 75% of what they get.

So far I've been lucky and could review 100% of what I've chosen from their list.

I'm also the Science Fiction and Fantasy reviewer for a paper magazine, and do a monthly column with a New Age slant -- so some Paranormal Romances and Historicals with magic fit into the column.

Lots of paper publishers send me ARCs (advance reading copies -- a bound POD printout with typos glaring and no cover art), and Hardcovers and Mass Market paperbacks - and even Trade Paperbacks.

There's no way any reviewer can possibly read every book that's published! So we specialize.

Now I'm not complaining here. We're talking the joy of a pig in mud, a puppy scratched behind the ears, a ghost discovering a way to talk to the living!

This part of my life is currently pure ecstacy.

But -- isn't there always a but? That's what makes stories, you know.

As sales volume goes down, the number of titles in each category has been going up. Worse yet, as genre walls dissolve, bits and pieces of what I specialize in (impossible Relationships that change reality) are now turning up in several genres -- where numbers of titles proliferate.

With the addition of small press, epublishers, and self-publishers, it is a total explosion of titles to read.

I try to give authors who send me copies direct, editors who send ARCs for cover quotes, and general ARCs preference, but titles I really REALLY want to read are piling up.

Here's a picture of 6 months of pile-up -- (this does not include all the stacks and stacks of books I have read, some of which are already reviewed on http://www.simegen.com/reviews/rereadablebooks/ PLUS a 3 ft. stack of to-review books I've already read not shown here) 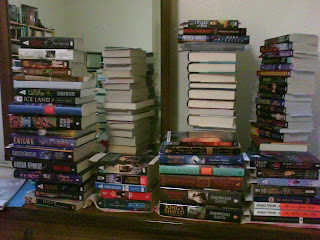 But my "beat" also includes SF/F on TV and film.

Have you noticed how many "impossible relationship" driven TV shows there are this year?

The last few years I could watch everything (Except for Buffy and Angel, pretty much only on the scifi channel which is now gone, renamed syfy and just not the same). I only watch 6 hours of TV shows a week. That's all the time I have, and it's usually while doing something else because I really don't have six hours a week to myself.

Suddenly, I'm recording about 10 hours of TV every week, and still only watching 6, so my DVR has overflowed and started not-recording shows on my scheduled recordings.

And that's not counting FILMS.

I know there are things I'm missing, important things. I scan goodreads.com and amazon.com Communities, facebook, and twitter for a perspective on trends and look for how trends in fiction mirror trends in our real-world problems (and I find a lot I haven't space to discuss even on this blog).

Trends are my main focus, the big picture, the hidden significance of the microscopic. An obscure book here, a self-published book there, an Independent film, a story in Variety, a headline in the New York Times, a tidbit from Locus, a sudden best seller, or a prize winner that didn't sell so well being made into a TV Show (can you name 3 such shows on TV this year? Include cable channels.)

There is something going on now that needs further analysis. I believe what we're seeing in today's fiction has significance on a scale of thousands of years of human history - perhaps tens of thousands.

There are huge problems facing us, like Global Warming (is it real? Should we do anything about it? If so, what? Is anyone lying or fudging the data? What does it really mean? Who's hiding what from whom? Or "never attribute to malice what can be adequately explained by stupidity.")

There's the increasing pace of epidemics bursting across species lines.

There's the species die-off that so many heroic people are trying to slow or prevent.

Perhaps there are new species evolving that haven't made headlines yet.

There's the increasing UV concentrations, rainfall shifts, and infectious plant diseases, diseases of the bee populations, all limiting the tons per acre of food we can produce. There's food supply contamination. There's pesticide and fertilizer chemical contamination affecting the fertility of animals, plants and people. There's food-distribution methods leaching nutrients from warehoused food. And there's hitting the global limit on how much more farmland we can put into service, plus the problem of CO2 emissions as we increase acreage cultivated.

And then there is the ever increasing power supply requirements of our ever-increasing global population.

Back in the 1950's there was a rash of SF stories about how civilization would collapse - giving rise to the genre called "post-apocalyptic" -- of which my Sime~Gen universe is an example, though of the more optimistic variety. Sime~Gen stories generally focus on a thousand years later, and humans of good spirit and good will put together a viable civilization again. Against all odds, they succeed, overcome, thrive and prosper because of love. They do more than restore lost civilization. They advance humankind.

Star Trek, too, is post-apocalyptic and optimistic -- for in Star Trek, Earth's history includes a vicious breakdown of civilization in the 1990's called The Genetic Wars. But everything comes out OK.(except for Ricardo Mantalban ).

Today the biggest trend is Urban Fantasy (turning up in every genre from Mystery to Historical) showing contemporary culture oblivious to the magical threats seething below the surface. Our Hero has to protect us from those threats and keep us oblivious.

It's not about "rebuilding" civilization, winning against odds, advancing where No One Has Gone Before. It's about preventing catastrophe, holding the status quo.

And that may be the view of an entire generation currently growing up, that all the problems that beset our world are inherently unsolvable even by the best science there is (maybe because scientists lie; they know something important they're not telling us? Secrets. Conspiracies. Darkness.).

Holding the status quo seems to me at the moment, the single biggest trend in fiction, a trend that is so big we (who absorb fiction one novel, series, or TV show at a time) can't see it as a pattern.

If the best we can hope for is holding the status quo, then we're living in a horror film. The Horror Genre definition is "the hero can't win - a draw is the best you can expect."

The Star Trek universe conception was that humanity not only can win, but WILL.

Today our world concept seems to be "hold on tight or we'll slip backwards."

If we don't change that attitude, it could become a self-fulfilling prophecy.

Consider how the USA (yes, I know some readers of this blog aren't in the USA) is handling Iraq and Afghanistan - Israel and the Palestinians. Consider the issues fueling those controversies and parse them into the paradigm of "hold on tight or we'll slip backwards."

Which way is "forwards?" Point me at a novel or TV show that blazes a trail "forwards."