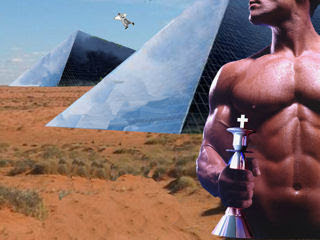 This image has absolutely nothing to do with Cindy's sagging middle, or Jacqueline's evolutionary preferences... it has to do with mine, perhaps.

On reading Jacqueline's fascinating blog about world-building, the two books I thought of were H.G. Wells's The Time Machine (I confess... it was not so much the book as the movie with Jeremy Irons as the troglodite-predator branch of homo sapiens) and The Sparrow.

Both books had a predator and a prey species who looked similar. In the case of The Sparrow, it was a matter of convergent evolution. The predator evolved to look like its prey, so that hunting would be less strenuous.

If I'm going to have a predator and prey species in my books, I'd like the predatory males to be attractive, and to have a limited interest in eating prey females.

I can say that. In both The Sparrow and the Jeremy Irons movie, a predator wanted to have intercourse with a female member of the prey species. Now, the female prey wasn't keen on the idea, in one case because it was dangerous... like a deer going to bed with a lion, in the other, because Jeremy looked and acted a bit like an Uruk-Hai.

Now, the Uruk-Hai were buff and ripped, a bit too ripped in some cases, really, but they had terrible dentition and I'm sure their breath was unimaginably bad.

The problem with all this for mainstream literature is human taboos. If we were lion-men, as a society we'd probably imprison any lion-man who indulged his attraction to a deer-lady.

Our culture has fewer issues when the predator is, or claims to be, a god. At least when I was a schoolgirl, we studied Greek and Roman literature in school. We didn't bat an eyelid when a honking great male swan (who was the king of all gods in disguise) gave Leda a couple of double-yolked eggs. Or when he turned a girlfriend into a cow so he could continue the affaire without upsetting his wife.

OK. His wife was upset anyway.

Zeus's other disguises included being a bull (now that is scary, and impractical, you'd think) and a golden shower (!).

For the last fifteen or so years, I've chosen to write alien romances about "gods from outer space" which allows me to cherry-pick items from our culture that I'd like to claim the gods gave us... like chess and fortune-telling. It's rather like the point Margaret made about our language stealing choice words from other nationalities, only --perhaps-- in reverse.

As for the picture, it's concept art from a work in progress and I put it up here simply for a bit of visual interest. I've gone back to Ed Traxler who created my Insufficient Mating Material slideshow to produce a slide show for the e-book Mating Net (a short story).