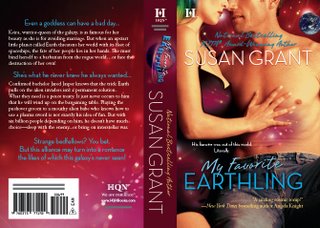 
This uncorrected excerpt may contain errors and other text not found in the final printed novel and is not for sale. Please don’t share the text with anyone without first receiving permission from the author to do so.

Talk about a morning after, Jared Jasper thought and shoved on a pair of mirrored Oakley sunglasses. He felt like he’d been run over by a truck. An eighteen-wheeler. Fully loaded.

His aching head and dry mouth wasn’t from a hangover. The single bottle of beer he’d sucked down twelve hours ago had metabolized out of his system so long ago that he barely remember drinking it. It was post-saving-the-world syndrome, he decided, reaching for a little elusive humor to carry him through the day. Saving the world wasn’t for the weak, especially when it was followed by losing a grandfather whose passing would leave a gaping hole in his life, topped off by having to make an appearance in front of a cheering crowd of thousands outside the hospital an hour later. After losing a loved one, you craved privacy; it was only human. But his family didn’t enjoy the kind of privacy others did. The Jaspers were a political dynasty second only to the Kennedys. Senators, congressmen, governors, both at the national and state level, they were called California’s “First Family.”

But no fundraiser or election victory party had ever come close to matching yesterday’s spontaneous celebration in front of the hospital, a celebration Jared would love to have shared, if he hadn’t known too much. If he hadn’t known the aliens were coming back, and if he hadn’t known they were so territorially ravenous that they combed the stars scooping up habitable worlds like pieces in a chess game so they could stay one up in their opponent, the Drakken Hoard, overseen by an aging Darth-Vaderish warlord named Lord-General Rakkuu. Yeah, he’d have celebrated if he hadn’t known the Coalition considered what they did acquisition, not invasion, even though it meant removing the entire native population and shipping them somewhere else. Not to where the good real estate was located, Jared was sure.

He made a sound of contempt in his throat as he pulled on a sweatshirt and prepared to leave the family ranch where everyone else was still sleeping. Give him half a chance and he’d teach the Coalition a thing or two about acquisitions and hostile takeovers. They wouldn’t like it. He guaranteed that.

Problem was, it wasn’t up to him—or guys like him. He considered himself more of a scrappy mediator than an eloquent boardroom negotiator. When it came to politics, too many people in his family did it better. Or at least they enjoyed it, which was more than he could say about his feelings on the subject. Yet, the elder Jaspers hadn’t tried to stop him when he decided to pursue dual careers in commercial real estate and military flying. His grandfather, while accepting of his choice, had been somewhat disappointed, but soon he had Jana to groom whose success had brought the old man immeasurable pleasure up until the day he died. But in Grandpa’s view, every Jasper was a public servant, politico or no. “Our duty to others comes before our own interests and ambition,” he’d say, and had drilled it into each one of them since birth.

Jared was no stranger to duty—his National Guard career testified to that; he just wasn’t cut out for the “sacrifice your life for the greater good” thing. He’d fight in the trenches to the bitter end, but he wasn’t going to lead the charge.

The sun was barely up as he grabbed the keys to his Bronco and walked outside. The threat of alien invasion seemed to hang over the world like summer smog in the LA basin. He made up his mind to stick with his routine: Starbucks then the gym. After working out, he’d head to the office, although his eerily efficient staff would probably ask why he’d bothered.
How would he answer the question? That he was restless? Sleep-deprived? That somehow his view of life, his future, had shifted, and what used to feel comfortable about his existence now felt like a new pair of shoes that rubbed? He doubted he was the only one on Earth feeling this way, but his deeper involvement magnified the symptoms.

Jared sat in the idling truck, gripping the steering wheel as he watched the sun rise over the ranch house roof. Everyone who mattered to him was inside that house. His parents, his sisters. And now Cavin. They all maintained separate residences, but somehow they always gravitated back here, where they grew up.

Where all the good memories live.

As first-born, the ranch would be his someday. He’d raise a family here, and his children would run through the fields and climb the trees, riding the old tire swing to splash landings in the year-round pond. Sure, he was a ways off from settling down, but it was comforting somehow, knowing that life waited for him.

Waited for him? Was he freaking hallucinating? An alien army was off somewhere, regrouping. Unless Earth figured out to keep them away, extraterrestrials would be taking up residence at the ranch, not him. Not his family.

He jammed the idling Bronco into drive and skidded around the arc of the gravel driveway. Before he could shove the truck into drive, the front door opened and a woman burst outside. “Jared, wait!”

Dressed in tight brown yoga sweats with a little purse tucked under her arm, his younger sister Evie trotted down the driveway in her flip flops. “I’m on my way to Starbucks,” he said.

“I was hoping you’d say that.”

A whiff of vanilla followed her into the seat. Evie always smelled good. She smelled like home. “What a night,” she said.

“I popped an Ambien and slept like a baby. I’ve got more for later if you want one.”

“A ten mile run followed by a few shots of Johnnie Walker and a hot bath is more my kind of nightcap.”

Her laughter made him smile. If Jana was the heart of the family, Evie was the warmth. The body heat, he sometimes told her, but that usually got him a dirty look because she took it as a comment on her weight problem, which in his mind wasn’t a problem. Something was wrong with society if a woman sweated being a size fourteen. But lately she’d been hitting the gym for Pilates and yoga. It was the best sign yet that she was getting over divorcing the asshole who’d cheated on her. For a domestic goddess whose home was the heart of her existence, seeing it break up had to be rough. It didn’t seem right that the world was threatening to come unglued just as she was thinking about rejoining it.

Evie slid her window down and inhaled. Her thick, dark brown hair blew around her shoulders. “Springtime, finally.
Thinking it’s too early for poppies?”

“Let’s check it out.” He pulled off the road and four-wheeled it through the meadow. Evie’s shrieks of delight echoed in the morning calm as he flew over hills and plunged down gullies. He knew without talking about it that this was what they needed after suffering such a devastating family tragedy and nearly losing their youngest sister. But they’d always been a lot alike, he and Evie. Evie was even more disinterested in politics. While he’d gone to Stanford, Evie had suffered through two years at a junior college before realizing her lifelong dream of becoming a wife and mom. They might be Jaspers, but they wanted no part of the glory themselves.

The Bronco creaked as it bounced along over dirt and rocks. It was hell on his shocks, but in light of everything else, who cared? Evie pointed to a long ditch ahead. “That one,” she cried. “Jump it.”

She screamed as he goosed the gas. The Bronco soared over the first ridge and with a jolt came to an abrupt stop with the bumper digging into the mud. His hand flew out automatically to keep Evie from hurtling forward, though her seatbelt had locked.

“Sorry about that.” He hoped he didn’t bend the front end. “You okay?”

But Evie didn’t answer. He followed her gaze to the right. Something large and heavy had dug a long scar in the ground. It went on straight as an arrow for about a half mile.

“The assassin’s space ship,” she said. “That’s where it crashed.”

During the chaos of the past few days, no one had spared the time to look for the wreckage of the dead assassin’s spaceship. Like Cavin’s ship, it was invisible behind its protective cloaking. But here it was in the middle of acres of grassland, scrub, and oaks along with a convenient trail leading right to it.

Convenient enough that you crammed you front end into it, he thought, frowning, and put the Bronco in reverse. The tires spun in the mud. He killed the engine before he dug in any deeper. “I don’t f-ing believe this. We’re stuck.”

“So much for Starbucks,” Evie said mournfully.

He got out and took a look at the rear tires. “I’ll need a tug.” There was another four-wheel drive parked in the garage back at the house. He opened his cell phone, saw the time and closed the phone. “It’s not even seven. Everyone’s sleeping.” He doubted Jana and Cavin did a whole lot of sleeping last night, either, but whatever time they could steal together, they deserved. Cavin was the first man Jana had chosen that Jared trusted to make his sister happy.

“We’ve got a little time to kill.” Jared sent a longing glance down the furrow to where the spacecraft would be if it were visible. “Come on. Let’s take a closer look.”

“Not if we open the hatch and go in. You can see when you’re inside.”