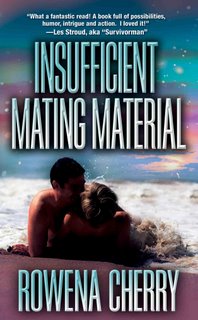 In Insufficient Mating Material, apart from the title, the climactic chess got left out, and so did mating in bed.

There aren't too many beds on uninhabited desert islands on alien planets. The cover artist suggests how my hero and heroine might improvise, and I've blogged about that before.

I once had a chess scene in the version of Insufficient Mating Material that was 300 pages too long for publication, but the revealing conversation that my romantic alien couple were supposed to have over the chess board (improvised out of a variety of conch-like shells, played on hard sand) had to be reassigned in order to save paper, ink, and yawns.

To my delight, as I research the history, attitudes, mindset and culture of fencers and sword fighters for my next book, I'm learning that chess --especially lightning chess-- and swordplay have more than a little in common, though duelling with a naked weapon is potentially deadly.

The first book I chose to read, for the pragmatic reason that my local library had it (and one other that my sword master recommended) is BY THE SWORD - A History of Gladiators, Musketeers, Samauri, Swashbucklers, and Olympic Champions -- by Richard Cohen.

How could I not dive into it with an extended title like that, and it has the coolest cover showing a gauntleted hand elegantly curled around the hilt of a sabre... at least, I think it is a sabre? The painting is a detail from Le Maitre D' Armes by Tancrede Bastet.

By the way, "Chess at full tilt" and "Chess at a sprint" are mottoes that my local fencing club uses.