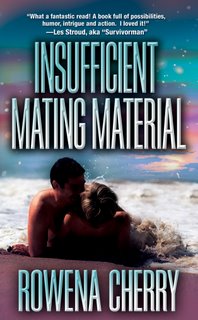 Question: How does one spell confidant?

Grievous began life as the ne'er do well mercenary, soured by life, down on his luck, with tendencies to court death-by-alien.

Originally, in the first version of FORCED MATE written in 1993, he was hired as a glorified stretch limo driver and tour guide, solely to transport Prince Tarrant-Arragon from the Salisbury Plain area (where all the best UFOs land in England) to Cambridge, and then to Cerne Abbas in Dorset for a visit to the fertility symbol hill-figure.

He was supposed to get left behind.

But Prince Tarrant-Arragon had never met anyone, human or alien, who blurted out unpalatable truths to his face. Grievous told Tarrant-Arragon that his courtship manners sucked; that nice girls didn't behave like 70's Bond girls; and that it wasn't polite to stand guard too close outside a lady's bathroom door, even if she was a flight-risk.

Thus Grievous, who'd been imprisoned for Grievous Bodily Harm (great bodily harm in the American legal system... how lucky Grievous was an English felon!) and had chosen Grievous as a suitably "hard" handle, found himself forced to quit smoking and take up a clean, fresh life in outer space.

One cannot smoke on a spaceship. Even on a spaceship bigger than the biggest aircraft carrier, fresh air is a concern, and a whole system of swearing and insult-giving revolves around offensive smells.

Of course, being an outsider, he makes potentially dangerous mistakes in FORCED MATE. He makes an even worse mistake in INSUFFICIENT MATING MATERIAL, and his love life suffers a set-back. Now, I'm writing KNIGHT'S FORK, and again Grievous accidentally puts his employer into hot water.

Grievous is quite a character. In his original incarnation he was heavily influenced by the Shakespearean character Enobarbus --whom I always thought was a bit of a misognynist-- the tough-guy Roman who felt such remorse he spouted a soliloguy to the Moon: Oh, sovereign mistress of true melancholy, the poisonous damps of night disponge upon me, that life --a very rebel to my will-- may hang no more upon me.

That's quoted from memory from Anthony and Cleopatra. It might not be quite correct.
If it isn't, I like it the way I remember it!

Until next time.
Rowena
Posted by Rowena Cherry at 5:49 AM