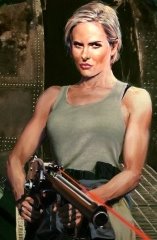 Now, you'd probably not guess it from her cover image. But she does. And that was rather the key that set my first novel with Bantam Spectra, Finders Keepers, in motion.

A lot of the story--a lot--revolved around Trilby's beliefs about herself. Okay, so she's a starfreigher captain, an independent operator, mistress of her own fate. But she's broke and--as much as us independent operators hate to admit our dependence on others--she's just been dumped by a long time boyfriend. A rather wealthy long-time boyfriend who had Trilby forgetting that she was just a low-budget junk hauler. Because Tril made the mistake a lot of people make, and that's defining who they are by who they're with.

Now, some of you may sit back and say, "Whoa, Linnea. Don't you think that by the time we have faster-than-light rated starships roaming the galaxy, that those kinds of emotional issues will be behind us?"

No, I don't. And here's why. First, don't assume my books are set in the "future". Or our future. Finders Keepers is Trilby's present day and how that relates to us--if at all--isn't germane. Second, even if you insist on defining Trilby's world as "future", I still think the human emotions of jealousy and inferiority--and more--will still be around. After all, they've survived several thousand years on this planet. Like cockroaches, I think they'll be around for several thousands of years to come.

So Trilby's issues can be our issues. It doesn't matter that she pretty expertly handles a large starfreighter. She's in debt up to her patootie over that same starfreighter, which only exacerbates her emotional fragility from being dumped by the ex.

Consequently, she makes a lot of mistakes in the first several chapters. And some of these get her even deeper in trouble.

But what I liked about Tril is she kept trying, kept fighting, kept pushing to survive. She didn't sit back and let someone else be the person responsible to solve her problems.

There was a recent Dear Abby column that categorized romance novels as "...the idealized depiction of romance, and women being 'rescued' by powerful, wealthy men...". I wanted you all to meet Trilby--in case you haven't to date--to show you that not all romance novels are so structured. Very especially not my science fiction romance novels. And if "Abby" is reading this, she's more than welcome to click on the link to my books and find out for herself.

Trilby was rescued by Trilby, even though at the end of the book, yes, she had a powerful man by her side. But she as much rescued his patootie as he did hers. And that's how she basically fixed her self-esteem problem. Not because he was there with her. But because in every instance when the going got tough, she kept on going. It just took her a little longer to realize that, that's all.