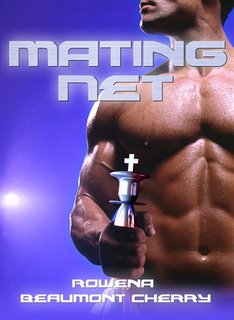 Helispeta wanted to marry well, but not THIS well.

In MATING NET a newly widowed god-Emperor wants to mate again. Soon. His twin brother's fiancee appears to be the ideal take-over target, so he decides to take her.

His family motto for seductions is: "By stealth if possible...."

Sequestered on a private island where she is being trained to be god-Prince Devoron-Vitan's mate, Helispeta can't wait to take her place at Court. She will go to any lengths to make sure that Devoron-Vitan does not break off their betrothal, even disobey an express Royal command.

She has no idea that she is playing out of her depth.

Her hologrammatic visitor stood stiff-legged, imperially tall and straight-backed. His bared, star-tanned, muscular arms were folded across his chest, and he was frowning impatiently because he had been kept waiting. Devoron-Vitan was every handsbreadth her warrior prince!

Helispeta caught her breath at the thought of measuring every part of him with the gentle palms of her hands, particularly the part that she would be expected to measure with both hands and the depth of her mouth.

“Devoron-Vitan, how lovely to see you!” she said, careful not to allow her juvenile adoration of him to show. “I thought you were too far away to visit me.”

“As you can see, I’m not.” He spread his powerful arms, and his short, dust-blue robe fell open, revealing that he wore only an even shorter kilt beneath his robe. Helispeta felt her eyes widen at the sight of his impressive chest and smooth, deeply chiseled stomach muscles. It was also the first time she’d seen him less than fully robed, and the sight disquieted her. Not that she’d never seen male anatomy. Even when there was no hope of becoming the next Empress, the virgin princesses’ curriculum required a theoretical command of every important male nerve ending.

She looked. Of course, she looked. Even if he had deliberately exposed his naked upper body to her as a test, she was interested. Too late she remembered that her eyes tended to change color from silver to the deepest violet, depending on her emotions. “Passion-meter eyes,” Devoron-Vitan used to tease her. He’d once said that he couldn’t wait to see how passionately purple her eyes would shade when she felt his immense and potent size throb inside her.

“I worry about you, my love,” he said evenly.

Oh, no! Surely, even a Great Djinn couldn’t read minds through a hologram. Why else might he worry? Oh, stars! Please, no. Please not because he was about to dismiss her from his affections forever, and he knew that she would be heartbroken. But, wait. It was the first time he’d called her his love. Would he call her his love if he were about to break off their betrothal?

“You do?” Helispeta fought to remain calm. Remembering her hastily chosen flower, she brought it up to her face. A tiny, purple, penis-shaped stamen brushed her nose, ejaculating pollen on contact. She felt the cool, tiny spray of pollen droplets on her heated cheeks. Oh stars! How vulgar! He’d never believe she hadn’t planned it! But she hadn’t. She hadn’t!

“Of course I do,” he said, seeming not to have noticed the accident with the flower at all.

From under her lowered lashes she noticed the crinkle of his slightly puffy lower eyelids, which gave the impression of an intelligent and good humored male who has shrewdly seen through everything and still sees the humor in it.

“I worry how you will adapt to life on a war-star. Will you miss lying in pools all day, looking up at the Body Imperial?”

He spoke of the Gas Giant, which Tigron orbited, but she was sure he was thinking complacently of his own magnificent physique.

“Perhaps you could install a very small murk pool for me?”

“Perhaps. Then again, perhaps not. Do you think my brother would approve of the extravagance?” He raised a single eyebrow the way all Djinn did.

Helispeta did not want to discuss what Djohn-Kronos would or would not approve, nor to speculate about his generosity. She traced a finger over the curved bell-end of her flower.

“Talking of your brother, I wrote him a letter of condolence.”

“Now why did you do that?” His expression was inscrutable.

“As his future sister-in-law, and given that I believed you were worlds away and might not even have heard that the Empress Djustine-Saturna had died ... the gesture seemed appropriate.”

Helispeta wondered whether she should add that for as long as the Emperor Djohn-Kronos remained a widower--which he might be for a very long time--she, as Devoron-Vitan’s mate, would be the highest ranking princess at Court.

She bit her lip. Possibly, Devoron-Vitan would misunderstand any comments from her on protocol and feminine precedence. One wouldn’t want His Highness to think she was ambitious for herself.

“It is never appropriate for a virgin to give Djohn-Kronos any sort of encouragement,” he said harshly.

“I’m sorry,” she said. “I was presumptuous. It won’t happen again.”

He nodded, as though satisfied by her humble apology. “What will you do during the watches, when I am on the Bridge of the Ark Royal and unable to entertain you?”

“Board games?” he repeated. Again the eyebrow lifted.

Helispeta wondered whether he was mocking her. Perhaps he was angrier with her for keeping him waiting than his surface demeanor suggested. She glanced under her long, dark curl-tipped lashes, lower down this time, at the short kilt under his open robe, and the jutting shape of him.

His thighs were not as muscular as she would have expected on a warrior, but very nice-looking.

As though he could read her thoughts, which of course he could not through a hologram, he smiled predatorily.

“Are you excelling in all your studies?” He casually scratched his amazing chest.

“At Mothercraft, too?” he asked. “Do you look forward to being a mother? I’d like to give you children.”

“Oh, yes,” she lied again. Diplomatic Dissimulation was her best subject, after Art of Conversation. Unless one counted prestidigitation and card-sharpery, which one didn’t.

“I’ll come for you soon,” he murmured huskily.

She was still betrothed to be mated! Helispeta sank to the ground, weak with relief.

She was lying, of course. So was he.

Djohn-Kronos stepped off his hologram sender, well pleased with the interview.

The important thing was that Helispeta couldn’t tell the difference between himself and his younger twin. However, he did have a very unfair advantage.

Mating Net is a short story, available as an e-book from New Concepts Publishing. It was written as a prequel for FORCED MATE to tell the story of the greatest mistake of Helispeta's life.