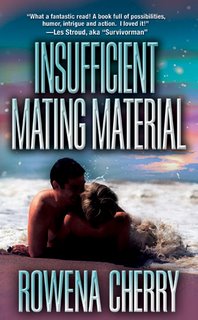 Thank Goodness For Tides: The Sex and surf scene...

In an earlier month's post I blogged about my complete and utter shock and dismay when I saw this cover art, lovely as it is.

What was my problem?

For a start, there was only one point in the book when the heroine's hair was that length, and it was a hundred pages from the end. Moreover, she was always very fashion conscious. Getting sand between her toes was an issue.

Secondly, at that one juncture, the beach ought to have been strewn with unsightly and inconvenient corpses. I couldn't use magic to clean them up, because this is a science fiction romance. I had to use the tide.

However, if I hadn't had strong tides earlier in the survival saga, I needed an explanation (short of a tsunami, for obvious reasons) why the tide would come in higher and go out powerfully lower than usual.

Also, there is the problem of realism. Having done my research and sat in the sea in various parts of the world, I have to report that when the sea is cold, a heroine is preoccupied with the coldness, no matter what else is up!

Someone will tell me that I ought to make the sea warmer, but warming the sea changes the world... the climate, the vegetation, the animals and insects. If I made the sea comfortable for copulating in, it would probably be full of bacteria and algae. It might stink. If I were to counter that by adding a lot of salt, I'd end up with the Dead Sea, and then the hero and heroine would be terribly thirsty... or mad.

Not least, there was the fact that the proverbial world still had to be saved in the following hundred double spaced pages. This roll in the ripples could not be the happy ending of the romance. While sex in the surf had to advance the story (and avoid being gratuitous), it could not be completely satisfying for both of them.

Well, given cold water and sand, the probability that the tide would either be coming in or going out, and the likelihood that there would be crabs in the shallows, making seaside sex less than completely satisfactory was not a problem.

Luckily for me, I had two months to mull over various ways around the difficulties because I didn't wait for my editor to tell me whether or not she wanted the cover scene written.

How many times did I write this scene? At least five.
Was it worth it? I think so.