Karen Wiesner: I Have Dreamed a Little Dream (Authors and Dream Inspiration), Part 2

I Have Dreamed a Little Dream, Part 2

"Believe in your dreams. They were given to you for a reason." ~Katrina Mayer

This is the second of four posts focusing on my Bloodmoon Cove Spirits Series and the vivid nightmares or ideas that inspired the titles. 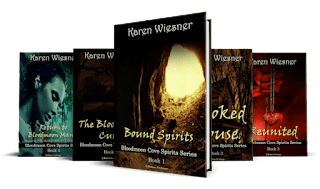 ** As a child, Esme was kidnapped and locked in a cold, dark basement. Her friends were rodents, insects, and the changeable terror that held her hostage. The only thing that kept her sane those nightmare years were her books. She’s been on the run since her escape a few months ago, never expecting to find another bound spirit come back to life. **

I’d wanted to write a ghost story for a long time—inspired after reading THE WOMAN IN BLACK and THE MAN IN THE PICTURE by Susan Hill (actually, nearly any ghost story written by her). I love that atmospheric kind of story with almost a gothic horror edge. After brainstorming over the course of many months, I came up with the idea of having the ghost story in a very unlikely place—a campground/county park. As soon as the setting was established, I thought, In fiction, what is a ghost but a bound spirit? Well, that gave me a great idea about having a heroine who’d been kidnapped as a child and held captive for most of her life until her escape. So…another bound spirit.

Reviews and Honors for BOUND SPIRITS:

4 star review from The Romance Reviews

** An unsuspecting nurse is lured to an ancient family mansion said to hold both ghosts and horrifying secrets in order to care for three orphaned children. Amberlyn was brought to Bloodmoon Manor to uphold the family legacy. Either she finds a way to escape with the children…or she becomes the next bloodmoon bride. **

Way back when I first got the idea for writing this book, my intention was to write a “modern gothic”. Everyone laughed at this because it’s like an oxymoron. But I wanted to write something with the palpable atmosphere you find in old fashioned gothics, only I wanted to put it in a more modern setting. I also loved the idea of putting the heroine in a place where she was basically trapped, no way in or out.

Reviews and Honors for THE BLOODMOON CURSE:

5 star review from The Romance Reviews

4 1/2 star review from Once Upon a Romance

4 1/2 star review from The Romance Studio

** Some doors, once opened, can never be closed again… Corinne has become the heir of her dead husband's family estate. Crooked House lives up to its disturbing name, as does the last of the line who disappears so often she could believe he's a ghost. But to believe is to accept the claims of ghost hunter, Rafe Yager: The longer she stays in Crooked House, the less chance she'll ever leave. **

The basis of CROOKED HOUSE, Book 3 of my Bloodmoon Cove Spirits Series, was formed when, in a dream, I saw a woman visiting some obscure relative of her brand-new husband. The house was weird and creepy, to say the least. When I woke up, I decided to merge bits of this with an idea I'd been toying with them about having the hero's sister in THE BLOODMOON CURSE be the heroine in another “modern gothic”. I was going to send Janine to some obscure relative, kind of like in Naomi A. Hintze’s novel YOU'LL LIKE MY MOTHER, a favorite story when I was a teenager. I’d planned to name it THE FAMILY or CROOKED HOUSE, both of which inspire something menacing in the right genre. I was also playing a horror video game around that time that gave me some ideas about getting stuck in a house inhabited with ghosts and other menacing supernatural creatures sucking out human physical energy.

CROOKED HOUSE has a lot of the classic elements of a ghost story--vengeful ghost, haunted house, tough-guy hero and vulnerable heroine--with some unique twists and turns in the form of a cursed ring, a novice white-witch best friend who literally has no idea what she's doing, a ramshackle house in Bloodmoon Cove serving as a portal into the spirit world, along with a reluctant ghost hunter that's one of the last descendants of the (fictional) Mino-Miskwi Native American tribe whose elders disappeared during a ritual at their sacred place at the top of Bloodmoon Mountain a hundred years ago. That ritual ripped a hole in the mountain and let loose a flood of spirits that haunt Erie County.

This is funny and a little creepy real life event, but I live in an old Dutch Colonial style house (think “Amityville Horror”). Since we moved in this house, we've had what we call demon flies (which are something I wrote into CROOKED HOUSE). Literally, we’ll kill one and another one…or a dozen…will appear a second later. I once closed myself into our small sunroom, closed all the windows, and put towels under the door to prevent the flies from escaping. Then I proceed to kill them one right after the other. This went on for ten minutes or so, and I must have had a hundred dead flies in the room with me. I suddenly got freaked out because this was completely unnatural and terrifying. I fled the room and didn’t go back into it for a long time afterward. Incidentally, we're said to live in the most haunted house in our town and the unexplained spirit(s) that keeps messing with our electronics could be the reason why. I'm only mostly joking there.

Have you ever been in a house reputed to be haunted? Leave a comment to tell me about it!