Previous parts of Mysteries of Pacing are indexed at:

Note in that index post, at the top there are links to 3 of my Reviews of Series I've been following on this blog.  Assuming you have at least looked over the cover blurbs and first and last chapters of some of the novels in each Series, think now about the Main Character in each series.

If you don't like the Series I've highlighted, pick some others you do like.  The point here is to follow a single Character through years, and even decades, of life's vicissitudes and rewards.

I'm also assuming, if you've had the ambition to write novels for a while, you've also delved into a large number of biographies, both of famous people and of less well known who have lived through major world events (such as the World Wars, famine in Africa, adventures with the Peace Corps, etc.). 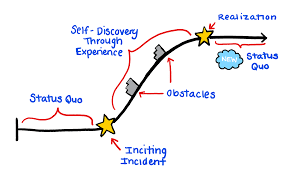 
Many people have lived interesting lives without making Headlines you can rip a story, plot, or setting out of.

Given that breadth of reading experience, and the ambition to write something as gripping and fascinating (maybe even instructive) as those books you love, consider the story you want to tell.

Now reconsider whether any of the books you have read actually TELL you a story.

If you're using the examples I've highlighted in Reviews, the answer is, "No, they don't tell the story."

The deepest, most gripping, thrilling, and informative books (novels and non-fictiion) SHOW you the story in such a way that you remember it as telling you the story.

The serious clue to what is happening when you remember a good book comes to you when you meet the author of that book and get into a conversation, not so much about the book but about life in general.

You come to realize one of the oldest bromides in the writing profession -- "The book the reader reads is not the book the writer wrote."

And the reason for that difference is the element in worldbuilding we've discussed at such length, Verisimilitude.

Making your world, your characters, your story into something resembling the reader's internal world (derived from but not identical to the real world around her) gives the illusion of verisimilitude because we all believe our own internal world is real, or very close to reality.

Verisimilitude is not about reality, but about resembling reality closely enough to "suspend disbelief" long enough to explore the validity of one's beliefs, to see reality from a perspective unavailable without suspension of disbelief.

One of the writer's tools for creating Verisimilitude in a Character, especially a Main Character, or Viewpoint Character whose story you reveal in the plot of his life-experiences, is Dialogue.

Characterization of a Viewpoint Character, one whose silent thoughts and reasoning, emotional reactions and subsequent evaluations, are revealed to the reader, requires that the Character's dialogue, words spoken aloud, be reflective of that Character's Arc.

As we discussed in Part 9, Character Arc is a vector quantity, having both magnitude and direction.  That makes it complicated, but extraordinarily simple to portray.


Here are a few posts exploring creation of Verisimilitude:

And here's the index post for the series on Dialogue which now has 15 entries.

Dialogue is not real-speech-transcribed.  Characters don't speak like real people.  Dialogue is an art form designed to move the plot while incidentally leading the reader (or viewer) to create their own Character from the words spoken.

Dialogue is "Di" -- that is, two-fold, an interchange between at least two.  One might be an Alien, a Computer, a Pet animal, a working animal (the Cowboy's horse), and the speaking Character may infer or imagine the responses to suit himself.

Robert Heinlein famously characterized Mike, the Artificial Intelligence awakened on Earth's Moon whose job was to run the infrastructure of the habitation there.

Dialogue, likewise, must not be Exposition.  Exposition is the writer filling the reader in on "need to know" matters the Characters already know.

Beginning writers often use the line "As you know, ..." and proceed to insert Exposition into the spoken words of the Character.  This never works well because it stops the forward momentum (Pacing) of the plot developments.

In a Mystery, for example, you can show-don't-tell a Character lying by using Dialogue to relate an Event the Narrative went through step by step.  Describing that Event to another Character, but leaving out or inserting information can move the plot forward.

There are many other exceptions, but wherever you find yourself using Dialogue to explain something to the Reader, re-write it into plain Exposition. Then you can mine the Expository Lump for salient bits, sprinkle them elsewhere in Dialogue, and delete the fabricated lump.

Description, Dialogue, Exposition, Narrative, are the basic tools of the story teller.  Each has a purpose, and when used for that purpose, each one can be crafted into a method of advancing the plot.

This year, 2020, we are striving to "get back to normal."  This concept "get back to normal" is an attempt to retain the DIRECTION our lives were going in while compensating for the speed-bump of quarantine which slowed down, delayed, and frustrated us.  Our life-Arc changed speed and now we struggle to keep direction.

Think about the world around you and find the "Arc" to understand how to craft a novel using Character Arc.

For a Character to "Arc" - the Character's life (inner and outer life) has to be in flux.  Finding where your Character's "novel" happens along that Character's life-path is one of the hardest techniques to learn. Romance is easy in that the novel happens between first meeting and happily-ever-after. Science Fiction is much harder, but generally the novel happens from before-the-Protagonist-knows to after-the-Protagonist-finds-out.  Science is the never-ending quest to figure the universe out.

Usually, we start a novel where two forces that will Conflict first meet, intersect, become aware of each other, or just plain collide.  Each of those forces are represented by a Character, and that Character (two Lovers-to-be or Hero and Villain) will CHANGE under the impact of the meeting.

Yes, both Hero and Villain, or both Lovers, have to change.

Romance is, as I've noted many times, something that happens in Reality under the impact of a Neptune Transit to the Lover's Natal Chart.  Neptune's effect is to blur, dissolve, erode, or confuse, mislead.

Neptune is also called Wisdom.  Neptune is about a method of cognition which is not logical, a data channel which streams information into the deepest part of the Psyche.

Neptune, Romance, doesn't usually cause Change or Arc in your character or life-direction.  It is other things going on while Neptune prevails that cause serious change of direction.

If such other direction-changing forces are acting on a Character, Neptune will move through and ease, smooth, lubricate the path of Change.

Romance makes falling in Love easy.  Without Neptune, falling in love can be a disaster because people resist the kind of change it takes to blend an innermost soul with another.

If a Main Character, Protagonist, Hero, is to undergo such a profound change of innermost character, how can a writer Depict that change without inserting long, boring, exposition lifted from Psychology Textbooks?

Here is the index to Depiction:

Dialogue is one of the most powerful tools for depicting a Character, with one caveat -- avoid trying to spell out an accent or dialect.

You can use spelled accents the first few times a Main Character encounters the Character who talks funny, but let the Main Character's "ear" become gradually accustomed to the dialect, and fade in a correct spelling, leaving only the rhythm and vocabulary of the accent.

And you can use that same technique with choice of vocabulary. You've seen it done (not really well) on Star Trek where Spock uses "big words" (even small ones may be obscure).  His dialogue is not laced with scientific jargon, but with precise English dictionary words where colloquialisms serve native speakers well.

In lieu of spelling out accented speech, a dialect or non-native-speaker, try altering choice of vocabulary, or phrasing.

Note how many older people use slang, old sayings, cliche or pop culture references from their teens and twenties, decades previous.  Note how today's young people have a whole new vocabulary, and new celebrities and movies to quote.

As an aspiring writer, you probably love words, and have a junk-pile of trivia in mind of words nobody uses much.

Find the etymology of words, old and new (easy using Google and Urban Dictionaries etc), and you will find the backstory of your Main Character depicted in the vocabulary of their youth.

Start the story with the Main Character's dialogue redolent of that epoch, and let the impact of a younger person's speech infect the older, let them discuss current events using non-current vocabulary.

Trying to explain the usage, connotation and denotation of unfamiliar words can be a Lover's Pillowtalk Device.

Love is about communication.  Use vocabulary to depict Character, and Character Arc as one absorbs the speech idiosyncrasies of another.

For example, one protagonist may start out hiding from emotional confrontations by sprinkling speech with "bromides."

Even if you know what a bromide is, and often use them yourself, Google "the bromide."  Check some of the "dictionaries" that come up and compare the entries -- they aren't all the same, and make wonderful ongoing conversational tag-games for Characters engaged in something more important.

A "bromide" can be identified as "...a comment that is intended to calm someone down when they are angry, but that has been expressed so often that it has become boring and meaningless."  This evolved from the wide usage of bromide compounds as sedatives.

The evolution of language describes a Culture Arc, which can be one of the Mysteries of Pacing, as one Character acclimates to an Alien culture.

See https://www.collinsdictionary.com/us/dictionary/english/bromide  - and note the tabs at the top of the page that separate slanted definitions.

Over the course of your Series of Novels, let the Characters absorb each others speech patterns, whether it surfaces as on-the-nose discussion of words, usage and meaning, or as is more congruent with verisimilitude, just unconsciously imitate each other.

That's how we learn language, imitating.

Try doing a scene where a younger Character learns some word-usage, or a "bromide" saying, from an old TV series (like Perry Mason in B&W), from an older Character who uses such a phrase naturally.

The reader may absorb lessons in appreciating language and its accurate usage, while the Characters you are depicting learn how much they mean to each other.