A recent post on Quora asked, "What are the traits of ghosts in your culture?" Musing on that topic, I first thought of our familiar depiction of a ghost as a humanoid figure draped in a sheet. Now rather cartoonish, this image has inspired generations of children to wear sheets with cut-out eye holes as Halloween costumes. I assume that idea originated with the white shrouds in which corpses used to be buried. In A CHRISTMAS CAROL, Marley's ghost wears his burial garb, complete with a wrapper around the chin to keep his jaw closed. Otherwise, ghosts in the British and American tradition tend to look the same as they did in life. Hamlet's father appears "in his habit as he lived." We can tell they're ghosts only if they vanish before our eyes, walk through objects, or become transparent. In many legends, they display the wounds of violent death, perhaps carrying their severed heads if they died by beheading.

Other cultures have different concepts of spirit apparitions. Among the many categories of Chinese ghosts, some have "mouths like burning torches," "mouths no bigger than needles," or "hair like iron needles" (from Wikipedia, "Ghosts in Chinese Culture"). The supernatural status of beings like those would be hard to miss! There's a ghost in Bengal that takes the form of an owl and another that appears as a ball of fire like a will-o-the-wisp.

Japanese ghosts—yurei—typically have white clothing and black hair. They may be accompanied by floating flames of blue, green, or purple. Most often, they don't have feet. In anime, we can recognize a ghost by the fact that its bodily form fades to nothingness where the legs and feet should be.

In American popular culture, we have conventional ways of recognizing other kinds of supernatural beings. A character who never seems to eat, seldom or never appears in company during the day, and recoils from religious objects might be a vampire. If several unexplained "wild animal attacks" have occurred locally, the person who has hairs in his palms, eyebrows that meet over the nose, and/or two fingers of the same length (typically the index finger and the one next to it) is the logical suspect to be the werewolf, especially if he or she consistently disappears on nights of full moons. Sometimes a fiction author can use traits such as these as red herrings, to point readers toward a supposed vampire or werewolf while another character is the true villain or something altogether different is going on.

During the witch hunts of the early modern period, if a person suddenly fell ill or suffered the unexplained loss of valuable livestock or other property, accusing someone of malicious magic seemed the logical response. A remembered curse from a neighbor (usually a woman, most often one who was already disliked) shortly before the stroke of misfortune could lead to examining her for evidence of witchcraft, such as a suspicious mark on the body or the keeping of a pet that might be a demonic familiar in disguise. In fiction, these "proofs" might be reliable, some other character might be the real witch, or there might be no actual magic at work after all. When as a child I read Elizabeth George Speare's classic THE WITCH OF BLACKBIRD POND, I was quite disappointed to find that there's no genuine witch in the story. The book is a realistic historical novel about accepting differences, and the titular character is a kindly widow ostracized because she's a Quaker. 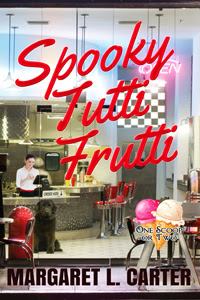 In my recent story "Spooky Tutti Frutti," I expect readers to figure out the nature of the ghost long before the protagonist makes that discovery. The title includes an obvious hint, for one thing. The mysterious girl tends to disappear abruptly when the protagonist's back is turned, and she acts clueless about common features of contemporary life. I hope the readers will enjoy waiting for their suspicions to be confirmed.