Lost Fleet: Beyond The Frontier - Leviathan by Jack Campbell

Lost Fleet:
Beyond The Frontier
Leviathan
by Jack Campbell

I've recommended Jack Campbell's space-war novels (actually several series in the same world he has built) since 2013, and I'm still recommending them considering the 2015/2016 entries in this series of series.

Here are some previous discussions pertaining to Campbell's worldbuilding in space: 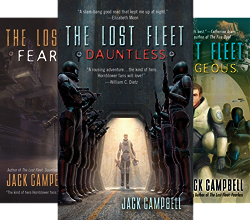 These Jack Campbell novels have several love stories in them -- super fantastic love stories -- and the material for a Romance is right there on the surface, but these novels are not category Romance.
https://www.amazon.com/Lost-Fleet-6-Book/dp/B011M9JF1W/

I've discussed them from several different angles, all of which are salient to the Romance field in general, science fiction Romance in particular -- and even Historical Romance because Jack Campbell is doing meticulous worldbuilding.  The same worldbuilding techniques he uses apply to Romance -- though the worlds and themes might not.

He focuses on the combat, the politics, and the "bear trap" plot of a mostly regular sort of Character volunteering for a job and finding out that it entails much more than expected, leadership of an entire battle Fleet, or several solar systems.

Technically, both the Lost Fleet and the Lost Stars series are not "war stories" or even battle stories.  All of these series, including the first contact with Aliens novels, are about what happens after a 100-year war, how humans can't adjust and after 5 generations of war just do not have the cultural background to think non-war-thoughts.

This is the fabric of dynamite Romance, and it is not plagiarism to lift a concept like that from published work and run with it.  There is much more to say about how humans would relate to each other across interstellar distances.

In the Lost Fleet and Lost Stars series, Campbell has explored what would happen if Aliens (really alien aliens) discovered humanity expanding among the stars and played a high-tech game of "Let's You And Him Fight" (a situation you can rip from today's modern headlines about the Middle East).

By ripping the material from modern headlines, Jack Campbell has produced a timeless work of art.

To get that "timeless work of art" perspective, you need to read most all the books, think about them and remember them as you read on.  It is the Big Picture that shows the art.

Large portions, pages after pages, of these novels are pure narrative describing space battles between fleets of ships (a fleet is like a symphony orchestra, composed of many kinds of instruments that must be brought into play with precise timing).  These battles take place under strict and limiting Newtonian laws of motion.  The fleets maneuver for hours or days then flash by each other in split seconds at perhaps .2 Lightspeed, which requires weapons to fire by computer.

The world Campbell has built includes two kinds of FTL travel, one natural wormholes and one kind using "Gates" that people can build and put places where wormholes are not stable.  Transit is different depending on which kind of entry is used.

So fleet maneuvers can include dodging in and out of some other dimensional space.  When sitting in Newtonian space, sensors "see" only at Lightspeed -- so when ships appear on the other side of a solar system from the Fleet you are in, you "see" them appear hours and hours after they actually appear.  Computers can compensate for some Relativistic distortions, but not others.

Campbell has figured the time-delay issue into Fleet Maneuver decisions and DEPICTED the effect Newtonian mechanics and the Lightspeed limit would have on success or failure of Fleet combat.  He includes some inertial damping on his ships, but it is not perfect.  Human presence aboard limits what a ship can do when changing vector.

Here is the index to Depiction

What can a Romance writer learn from reading the depiction of Newtonian space combat?

Combat is a form of communication where each maneuver is a sentence in a conversation.

Sex is a form of communication where each maneuver is a sentence in a conversation.

It is very hard to learn to write great sex scenes.  Reading great combat scenes is boring to Romance writers.  Combat, fight scenes, are just plain boring.  So, since you do not get caught up in the material, do not bring a thousand assumptions to the scene, you are able to penetrate the facade of the scene down into the mechanism of the writing craft that produces the scene.

Once you can see what Campbell is doing that so enthralls his intended audience, you will be able to block a sex scene that moves your Romance Plot ahead just as compellingly as Campbell's fleet battles move his vast Interstellar Politics and Human Nature plot ahead.

In THE LOST FLEET: Beyond The Frontier: LEVIATHAN, Campbell explains (in show don't tell) how and why it is that his Hero, John "Black Jack" Geary, has no interest in taking his Fleet to the home world and taking over the government, setting himself up as emperor or something like that.  Many people want and expect him to.

In part, Campell depicts the Character of Black Jack as dedicated to the Republic model of government by democratically elected officials by showing how he befriends (in previous novels) the aliens called The Dancers (because of their ship Fleet maneuver grace), and now by how The Dancers choose to help him defeat this new enemy.

And we come to the new enemy.  It is "the enemy within" -- and enemy created by the very government Black Jack supports.

When the interstellar war against the other half of Humanity (the Syndic) was being lost, Black Jack's side created a last bastion the government could retreat to if they lost their home world. And they created a Fleet of battle ready ships, with no human crews, because they thought there wouldn't be anyone to man a fleet if the home world was overrun.

This fleet was run by autonomous Artificial Intelligence recently programmed to flight like Black Jack Geary.  In other words, Black Jack must now pit his fleet against HIMSELF.

And, in true Major Motion Picture form, Campbell brings Black Jack's win from a B story, a sub-plot, led by a Character who seemed mere window dressing (a love story distraction).  She turns out to be The Hero of the final triumph.  Yes, Black Jack wins by dint of the efforts of women who get full credit for their efforts, not just from him but from society.

By this point in THE LOST FLEET - Black Jack is married to the Captain of the flagship from which he commands his Fleet.  There's a lot of sexual tension on that bridge.

But there are two major lessons in the fleet battle scenes: A) They Occupy The Place A Romance Would Have A Sex Scene, and B) If The Battle Scenes Bore You, You Now Know Why Romance Bores Other Readers.

Note how many words each battle scene goes. Note where you lose interest.  Write your sex scenes to the length you want the battle scenes to be, and you will broaden your readership.

Beyond that, you can learn a lot about worldbuilding by noting how Campbell "reveals" bits and pieces of the entire canvas of interstellar civilization(s) he is using.  He does not tell you everything at once, does not spend pages and pages giving you information about politics, the different planets, their economic inter-dependencies etc.  If you learn any of that, you learn it by figuring it out.

Examine the entirety of all of these novels and you will see that you do not need to use everything you invent for your universe.  The reader does not have to know most of it.

Note how Campbell using a very tight point-of-view technique to show you the slice of that whole universe he's built that actually pertains to this one person's life and life-choices.

The dilemmas and conflicts that drive Black Jack Geary are clear, human, immediate and comprehensible -- even though he lives in an incomprehensible universe.

Now remember that to most of your readers, the condition of being "In Love" -- the reality that suddenly becomes tangible to those caught in Romance -- is as alien as Black Jack's interstellar civilizations are to you.

Depict and explain it to those readers in Show Don't Tell.