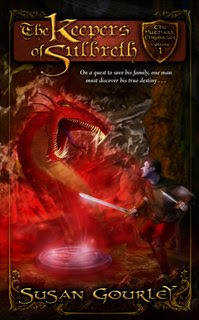 Is it me or is the vampire craze out control?

First there were an invasion of the cold, blood suckers into in the adult romance market. Then most recently they've moved into the young adult market. My own daughter was crazy waiting for Stephanie Meyer's latest. Yes, I did read them and I too found the main character vampire to be indeed heroic, sensitive and even sexy. But enough already. I want a warm body in my romances. A warm body with a beating heart and blood in his veins. I want a hero that's very much alive, not undead. The vampire is historically the enemy of mankind, of humans, so how did we get to this point of seeing him as attractive and desirable?

My two fantasy series have plenty of both. I can only tell you about one of them. I don't want to jinx that other series before I sell it. In my upcoming fantasy novel, The Keepers of Sulbreth, the hero is a bastard swordsman living in a medieval world and fighting demons and prejudice. He's handsome, arrogant and angry at the privileged nobility including his king. All that can only land him in trouble.

In my current romance series consisting of the books, The Greater Good, The Lesser Evil and the recently released third book, A Ruthless Good, my heroes have hot bodies and absolutely no paranormal powers. They don't drink blood either. If you too want like your men and women to have those thudding hearts in their chests so they can be broken and healed, there are many books out there.

If you're like my daughter, there's always 'Twilight' to watch over and over again now that it's available on dvd.


Admin note:
Thanks to Susan Kelley for sharing a guest blog.
Thanks to Jacqueline Lichtenberg for offering her regular day to a guest in her absence this week.
Posted by Rowena Cherry at 3:21 AM