Polly Wants A Cracker, or The Issue of Trust in Romantic Science Fiction

The past few posts, such as Barbara Karmazin’s most recent one on alien sex, has raised a number of very interesting questions (an ideas) for writers and reader of romantic science fiction. Jacqueline Lichtenberg—here on this blog as well—has often referred to the RSF/SFR genre as “intimate adventure” and in viewing these posts, the reasons why that label is so apt can become clear.

The posts to date have for the most part explored the arena of human and alien in a first encounter or first contact situation.

But where do the stories—and the characters—go when aliens are not so alien?

Let me digress a moment and talk about parrots. (Yes, I’m tired, behind deadline and packing for Archon but bear with me, I will make sense eventually). It’s been my experience that most humans are uncomfortable with large birds. Sharp claws, large beaks and fluttering wings make us a bit timid. Children who willing stick their fingers through the bars around a kitten’s or puppy’s cage at the pet store stand with hands behind their backs in front of the parrot’s cage. “CAUTION: HE BITES” is often tacked to the cage.

The reason parrots bite are many but very often come down to two things. One, a finger thrust into their view is looked upon as potential food (based on instinct, which is why you always offer a parrot a fist, not a finger). More likely, though, is the fact that a parrot’s beak is used as a third foot. This is something most (non-parrot) people don’t realize and something I’ve learned after many years of being owned by feathered friends.
You put your hand into the parrot’s cage. He leans his head down and latches firmly on to your arm with his beak. NOT to bite (but he will if you jerk your hand away) but to steady himself so he can climb on.

It’s the jerking-away reaction that causes the bite, you see. The fear by the human who doesn’t understand the parrot’s methodology and mind set.

Since being owned by a variety of large and small parrots (that's our Amazon, Bird, above), my husband and I often now find ourselves being feathered-friend rescuers, for the simple reason we’re not afraid to approach any kind of bird or parrot. We understand a bit more about them—and their beaks. We’ve handled injured egrets, baby terns, seagulls, Muscovy ducks, lovebirds and cockatiels. We understand the beak, like a human’s hand, is primarily for grasping. It can, like the hand, also injure. But we don’t come into the situation with that mindset.

Which brings me back to alien sex, or romantic adventures with someone who is not a Terran of the human variety.

What if the aliens in your novel aren’t totally alien? What if they’re like parrots? Not feathered, though I wouldn’t rule that out. But what if they’re just another species or race that shares some of the same breathing space your human characters do, but without complete familiarity?
We’re very aware of birds in our environment on this planet. But most of us have no information or experience in interacting with them. 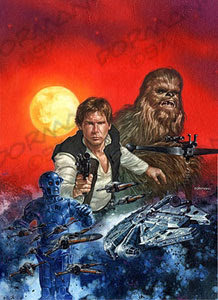 Think of Chewie in Star Wars. Han Solo—a human—was definitely very at ease with Chewie. There was no perceived human-parrot reaction (ie: I’ve seen you but I don’t really understand you). I don’t know if in Lucas’s universe there are any human-Wookiee couples, but given Han’s comfort level with Chewie, it wouldn’t surprise me. (And the image here is from fabulous artist Dave Dorman's site.)

I structured Ren, the gilled Stolorth in my Gabriel’s Ghost, more on the parrot mold. Chaz Bergren, the female human protagonist, knew of Stolorths and had seen many in her life but never really knew one. She knew what she’d been taught about Stolorths. She knew what others said about Stolorths. But until life (and my plot) threw her in close contact with Ren, Stolorths were—for all their visibility in her existence—still “other.” Alien. Extending your hand could as likely get your bit, as not.

Part of Chaz’s growth in the book was her replacing Ren’s “alien” label with one of “person.” Someone she was capable of understanding and trusting. And Ren was not the love interest in the plot (for those of you who haven’t read the book). But Chaz’s extension of trust to Ren paralleled and mirrored (and foreshadowed) the issues she had with Sully (the love interest and male protagonist).

And it turns out, of course, that Sully is far more “alien” than she suspected. A parrot in human clothing, if you will.

Captain Tasha “Sass” Sebastian also faced that issue (gee, you think it’s one I like?) in

Games of Command. Branden Kel-Paten was a bio-cybe, a man/machine construct, his human familiarity now blurred by the knowledge of his cybernetic augmentations. Like me yet not like me. A known unknown. “Can I trust him?” was a huge issue for Sass even though Kel-Paten’s very “alien” qualities were created by humans.

Can we trust an alien of our own making?

One of the reasons I so enjoy C.J. Cherryh’s FOREIGNER series is that—excerpt for the first book—her aliens are a known alien to the human, Bren Cameron. Differences and lack of full information about each other are acknowledged and the extension of trust has begun. We’ve learned that a finger may get bit but a closed fist can tolerate the pressure of the (potentially injurious) beak.

The exploring more is the reason I write what I write.