The Four Myths Your Muse Desperately Wants You to Believe, Part 1 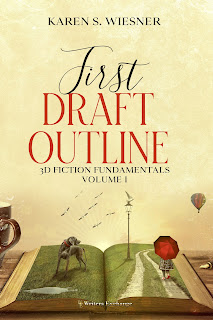 This is the first of four posts dealing with how writers can get their muses to work with rather than against them.

I don’t know about you, but I didn’t always believe my muse was working with me. When I first started writing, I was convinced my muse was a sadistic taskmaster who enjoyed having enormous power over me. He (apparently my muse is male) could make me happy, he could make my life everything I could ever want...and he could make me utterly miserable by working me to death, leading me every-which-way just to get a finished book, or leaving me altogether just when I needed him most. It was all under his power, and I believed I had to accept the situation or he’d take the words away—maybe for good.

Now, most writers are stereotypical hosts: They believe if their muse leaves them, they must have done something horribly wrong. If the muse comes and guides them on a magical journey of enlightenment, they feel utterly blessed. They accept whatever their muse throws at them simply because the muse has exactly what they need. The words, the words! We need the words! Anything to get them!

The muse likes to withhold its favors from us because it gives it even more power over us. It likes to lead us in the wrong direction or make us slave endlessly—working and re-working the same things over and over—to make us realize just how dependent we are on it. Who created writer’s block and spread the rumor that a writer’s dirge will be played if we defy our omnipotent muse? Guess.

This for-part article takes a stab at the all-powerful muse and shatters some of the myths it leads us to believe are the truth in order to keep us in line.

Myth One:  You have to be a slave to your muse.

Writers who are slaves to their muse are positively on fire for their craft...when the muse has them in its fickle grasp, that is—then and only then. When the muse is withholding favors, these writers may feel they have no sense of purpose or direction. When they’re in the grip of writer’s fever, they’re the happiest, most fulfilled people in the world. When they burn out like a comet in the night,—and it is always that dramatic—they’re miserable. They write day and night for a couple weeks or months solid, conceivably producing anywhere up to fifty or more pages a day. Writer’s block and burn-out are constant fears. Muse-driven authors may or may not finish a project. If they’re unpublished, more often than not, they don’t finish. They tend to write in a non-linear, chaotic fashion, heeding the muse in whatever direction it calls. There is no feeling of control over this creative urge they have. These authors are terrified of their muse; they, essentially, worship it from afar, not daring to get too close and disturb the Almighty Bard. They are willing, superstitious slaves to their muses.

Does this describe you at this point in your writing? Don’t worry. Almost every writer starts out this way and may continue because she’s been told it’s the only way, or she’s superstitious and deathly afraid of defying her muse.

During my years as a slave to my muse, each book I wrote required a minimum of twelve drafts (read:  start to finish overhauls). I never used an outline; I couldn’t even imagine how any writer could see far enough ahead to use an outline when I couldn’t see the present scene before I wrote it, let alone see these things in detail. I wrote by the seat of my pants, never knowing what would happen from one scene to the next. Frequently, I ended up with a thousand pages of useless drivel, too. Other times I at least came out of the book knowing what was right and what was wrong with the project. I could then set it aside for a while and come back to it fresh later, ready to start all over again with those “right” parts.

After writing a dozen books like that, I got better at the whole process of writing and I could write four of these overhaul drafts instead of twelve, coming out with a fairly clean novel. It still wasn’t as efficient as I wanted to be. Let’s face it, it’s exhausting and intimidating to go into writing a book thinking you’re going to have to do this at least four times before you get it right.

I had my life happen to me all at once when I was twenty-nine—I had my first child and my first book accepted for publication almost simultaneously. A fickle muse wasn’t what I needed. I was forced to make a decision about how I was going to juggle everything, and quick.

In the next part of this article, we'll talk about another myth your muse desperately wants you to believe.

Karen S. Wiesner is the author of First Draft Outline