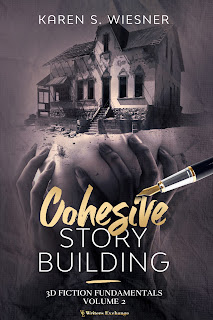 In this three month, in-depth series, we're going to go over what could be considered the grunge work in building a cohesive story. Revising, editing, and polishing require a little or a lot of writing elbow grease to finish the job and bring forth a strong and beautiful book.

In the previous part of this series, we went over general revision choices. Let's continue.

• Watch adverb usage. Go over your story with a highlighter, picking out all the adverbs that end with -ly. You can't and won't--and contrary to what most experts will tell you--you shouldn't get rid of all of them. Adverbs have their place, just as adjectives do, so don't go crazy on this point and turn out an adverb-free story as if you'll win an award just for managing this feat. That said, it is very true that adverb-overwhelmed narrative tends to bog a story down. There's usually a better (less boring) way of writing these words that so easily pepper a first draft, such as in this example:

--A Time to Mend, by Angela Hunt

A lot is conveyed in the second version that wasn’t in the first, so the change involved more than simply cleaning up an adverb. In the second version (the published one), the delivery of the sentence itself is action-packed and to the point. You can almost feel shame, a violent and dirty emotion, polluting the character's veins. You want images like this to come through as you’re editing and polishing, so watch for opportunities to refine them.

• Avoid overused words. Was/wasn't, were/weren't, did/didn't, have/haven't, is/isn't, are/aren't, to be/been are some the most common culprits. Using a different color highlighter or your computer search function, highlight these words to see how often you're using them, then try to find viable substitutes for them. When I critique someone else's work or judge a contest entry, I usually find hundreds of these within just a few pages. While you can't and shouldn't get rid of all of them, make sure you're using as much active voice as possible.

To give you an example of what a difference it makes to clean up these words, below you'll see basically the same sentence, but written without overused words in the second example:

He'd have known it anyway. Fury was something he felt like pure energy coming from it in waves. It was hot and powerful, rolling toward him like heat from a house fire.

He'd have known it anyway--he could feel fury as pure energy coming from it in waves, like heat from a house fire.

Both of these examples say about the same thing. The difference is that the first is written in an unimaginative, overwhelming, passive voice, the second in an active, impacting one that's extremely effective. It's just tighter and clearer to read.

Remove the clutter of unnecessary words as much as possible in your editing and polishing. Do the same for a whole host of careless choices in sentence structure. One culprit that crops up inevitably is the little phrase was going to. In a sentence like "She was going to be strong and independent," the was going to can easily be replaced with would. Or better yet, She'd. The outcome, "She'd be strong and independent," is right to the point without unnecessary words to clutter it up.

• Overused "idea stringers". Replace words like when, as, realized, wondered, occurred, felt, seem, appear, look. These are some of the most overused words in existence because they string ideas together so easily. But if you see them more than once per page, they start to call attention to themselves. As with adverbs, you can't get rid of them all, but you can reword or vary them. One way to handle this situation is to replace these words with more effective words or phrases:

She was greeted by the scent of gingerbread when she stepped into her apartment.

The scent of gingerbread greeted her the instant she stepped into her apartment.

We also get rid of that dreaded was in this revision. When can also be replaced with while, once, before/after, as, etc. Another good way to deal with these worn words is to take them out completely, dividing the sentence into two or more sentences instead:

She realized she could have called out to him only after he walked away and turned the corner.

He walked away. She watched him in mute shock. Only after he turned the corner did the word "Wait!" fill her throat with violent need.

While the first example is succinct, it reads very slowly and is a bit unfocused. The second version has a lot more impact, putting the reader both in the scene and in the character's viewpoint, as well as eliminating overused words.

• Start with a bang. Avoid sentences that begin with There was/were, It was, They were, He was. They tend to slow things down, and risk putting your reader to sleep. An example of passive construction, and suggested revision follow:

There was no evidence that he had heard her.

If he heard her, he gave no indication.

This one is another example of the reader looking through a glass pane at your character versus being with the character. You truly do want your reader with your characters.

Remember that the words you use have an impact on the reader's perceptions of the characters. A character who never uses contractions will come off as stuffy, uptight, and snooty. Besides, using contractions will give your sentences more immediate impact. So please do use contractive forms of had, have, will, etc. as much as you can if you're writing a contemporary story. Check out these examples, with the better ones coming from The Ocean Between Us, by Susan Wiggs:

She had said all those things many times before.

She'd said all those things many times before.

She still could not believe she had gone through with it.

She still couldn't believe she'd gone through with it.

While editing and polishing, you can easily use a highlighter or the search function of your word-processing program to make sure you don't inadvertently leave a cannot or have not in there. Save contractions for when someone is speaking in dialogue and making a point (possibly in anger) by not using a contraction instead.

Next week, we'll continue with the general revision choices.

Karen Wiesner is an award-winning, multi-genre author of over 150 titles and 16 series.