Based on Writing Blurbs that Sizzle--And Sell! by Karen S. Wiesner 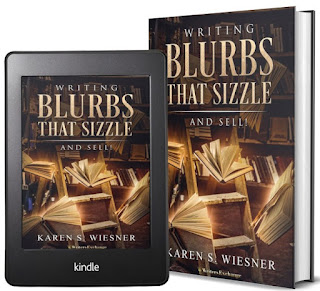 This is the last of six posts focusing on writing effective blurbs for your books.

In the previous part, we talked about blurb sizing and branding. Let's continue.

Rule 1: Associate the Series With Each Title

To me, this one is so out-and-out obvious, I feel a bit foolish even mentioning it. If your readers don’t know that your book is part of a series, what’s going to prompt them to look for the next one and the next one and the next one after that? It should be so blatant, yet this is the number one series rule I see broken most frequently, and it’s such a missed opportunity. Look at the website of any book distributor, and you’ll often have a hard time finding out if a book is even part of a series. A few publishers are diligent about this, but most don’t bother.

Make sure the title of the book is always, always, always associated with the series. In other words, never allow yourself or your publisher (if you can help it) to include just the title of your book. For instance, I never refer to my book Shards of Ashley simply by its title. Always, I refer to it as Shards of Ashley, Book 5 of the Family Heirlooms Series. Notice several things about this: I include the title of the book, the book number in the series, and the series title. In this way, new readers and long-time fans immediately recognize the information they need to know.

A new trend in the industry that needs to be addressed here is that many distributor websites are becoming sticklers about how your cover and title page have to match in terms of how the title, series and book number are listed. I've had books rejected for distribution because the cover creatively has the title in one place, the series in another, and just the number in some kind of artistic "seal" elsewhere. Because the title page has the book listed as, say, Shards of Ashley, Book 5 of the Family Heirlooms Series, the book is rejected as "not matching". This is beyond ridiculous, in my opinion, since they're clearly the same, though automated systems may be too dumb to realize it and you'll have to ask that a human at the place of distribution look into it. When this inquiry has been undertaken in my case, approval is always forthcoming. But authors and publishers need to be aware this is a growing trend and adjust accordingly.

Additionally, my publisher for Writing Blurbs That Sizzle--And Sell! (and my fiction), Writers Exchange, always lists the series name first, followed by the title and the book number in the series, as in: Family Heirlooms Series, Book 5: Shards of Ashley. Her very sound logic is that, with the series name first, all the books tend to be listed together (and almost always in the correct order) on websites that list only based on the title in alphabetical order. If you have the title of the book first, the other books in that series can end up on totally different pages, which isn't ideal.

For those readers who try to follow a series, it’s extremely helpful to include the book number in the series whenever you talk about a particular title. On the listservs I patrol, I’ve heard a huge number of series readers say they won’t skip around in a series—they start at the beginning and read chronologically. Very few readers will skip around. Having the book number associated with the title (and even on the spine and/or front and back cover, as we’ll talk about soon) ensures that readers know exactly where this book falls in the series. Make a point of being consistent in the use of the title of each book and trilogy/series name by ensure that the whole title of the book is always associated with the series.

Even in the process of working with your editor, continue stressing this point to enforce to her that you see all the stories as part of the series—one book can’t be separated from the other because they belong together. Self-publisher authors need to do that themselves.

While publishers and self-published authors utilize distributors for getting the books out to the customers, the people in control of publishing provide all the information necessary for distributors to sell the books. Hence, those people doing the publishing tend to not provide series information at all, or only incompletely, along with the basic book information. Talk to your editor/publisher about associating the series name and book number for every single title. Self-published authors, make sure you're doing this. Make sure this information makes it to distributors consistently.

If your publisher isn’t diligent in this regard, you can change your information at Amazon.com, BarnesandNoble.com, and other online distributors. While you’re logged in to these sites, the page for your book may have a section labeled with something like "Update This Information". Sometimes publishers won’t allow anyone to change the book information, but if you find that you can change it yourself, do so!

Take my advice: If your publisher won’t follow through on this particular branding, rigorously follow the advice yourself. For every scrap of promotion you do for the series, make sure you include the complete series information for every title. Absolutely do this for your website. You might even consider putting a list of series on your website with the title in each series and the book number—and maybe even making this list printable. That way, your most avid followers can get the information they need without too much hassle. Remember, you can lose sales by making basic information hard to come by.

It’s necessary to utilize series blurbs as much as possible to create brand awareness for it. Don’t underestimate the appeal of the series blurb. New and longtime series readers alike want to know how the current book connects with others in that series. If the series blurb is effective, those sentences will accurately reflect the premise of every book in the series in a concise, intriguing summary. Series blurbs can sell books just as surely as story blurbs can. An author would never consider skipping a story blurb—a publisher wouldn’t either. While some publishers write and use their own series blurbs, the series blurb is often underrated and underutilized—to our detriment.

This is the second most common series branding rule I see broken. In this case, it’s not just the publishers who neglect to utilize the series blurb. Recently, I wanted to find out more information about a certain bestselling author’s series. The series had been around for a while, and several books were already available. I went to the publisher’s website, the author’s website, and even distributor websites trying desperately to find out what the series was about. The story blurbs were fine, but they didn’t tell me enough about the connections between the individual books to really appeal to me. (Not to mention that none of the books had numbers, so I had no idea about the order of the series, so finding out where to begin would have been a headache.) When I buy a series, I look first at the series blurb, since that tells me what I’m getting into. If that entices me, I’ll read individual story blurbs (in order). If I like those, I’ll make a purchase. In this case, the information I needed was nowhere to be found. I got tired of chasing after it, and this author (my apologies if none of this was her fault) lost the sale of all of these particular series’ titles.

I do feel bad about that, because I know authors who aren't self-published have little if any control over aspects of publication when working with mass-market (and sometimes even small press) publishers. But that particular author did have control of her own website, and she failed to give me the information I needed to make a purchase enticing, or even inevitable.

Utilizing your series blurb is critical to branding. It is part of what convinces a consumer to begin your series. If she likes what she reads, she may buy every single book in the series. But if she doesn’t know what she’s getting into, she may never bother. If enough consumers have this attitude because the publisher and/or author make it a hassle to obtain vital information, your series will fail to gain readers. A series isn’t like a single-title book. If you lose readers from the beginning or anywhere in the middle, you’ve lost them for its entirety. Some series authors never recover from this.

Bottom line, the only reason for shortening a blurb that's already effectively good is because we're forced to because of publishing and marketing considerations and limitations, and blurbs are an important part of the branding package of author, books and series.

In this series of articles, we went over the most basic considerations in crafting blurbs that not only sizzle but can sell your books.

Karen S. Wiesner is the author of Writing Blurbs That Sizzle--And Sell!

http://www.facebook.com/KarenWiesnerAuthor
Posted by Karen Wiesner at 7:00 AM