This is the seventh of eight posts focusing on my Woodcutter's Grim Series and the stories behind classic fairy tales. 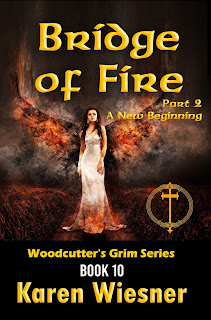 ** Loosely based on "The Three Billy Goats Gruff". The son of shape-shifting goats, William Gruff escaped a dire fate when his family is bound to the evil pervading Woodcutter's Grim, the only shelter for supernatural creatures. Adaryn Azar, a legendary phoenix, changes his lonely life. But a happily-ever-after may be impossible when the hunter who's tracked her for centuries finds her again. Dying and resurrecting would mean forfeiting the life growing inside her. Unfathomably, Woodcutter's Grim may be the only safe place left. **

As I said back when I was talking about HUNTER'S BLUES, Book 9 (A Mirror Darkly World Novel), that story was a part of the series but in an awkward way. Originally, I called it a "futuristic" novel but that wasn't entirely accurate. Even before I finished BRIDGE OF FIRE, there were of course vague connections in the series between all the other books that came before and HUNTER'S BLUES, though no definite connections that allowed a timeline to be established. BRIDGE OF FIRE'S three-part tale provides the connections that I never realized were needed before it to explain how HUNTER'S BLUES fit into the series.

I knew as I was outlining all three parts of BRIDGE OF FIRE that Woodcutter's Grim was becoming complete in a way that it never felt like the series would be before. A part of me wanted to leave it open-ended so I could come back into it if I ever wanted to. But I had a major change of heart and made radical life decisions in 2018 that made me realize I really wanted to tie up as many of my series as I possibly could and move on.

My critique partner, Margaret L. Carter, told me while reading BRIDGE OF FIRE while it was a work in progress that she'd never read a story with a goat shapeshifter in it before. I realize that the St. Bernard shapeshifters were also unusual, though maybe not as unique. BRIDGE OF FIRE also has the last of the ancient fae lineage. Phoenixes, of course, are fairly common in supernatural stories. Phoenixes are associated with Greek mythology, and I confess I've made mine just a little different from all the research I did on them. I wanted Adaryn to be utterly unique. Find out more about the fascinating myth of phoenixes here: https://en.wikipedia.org/wiki/Phoenix_(mythology)#:~:text=The%20origin%20of%20the%20phoenix%20has%20been%20attributed,texts%20may%20have%20been%20influenced%20by%20classical%20folklore.

Are you as fascinated by phoenixes as I am? Leave a comment to tell me what appeals to you about this immortal creature of folklore!