This is the fifth of eight posts focusing on my Woodcutter's Grim Series and the stories behind classic fairy tales. 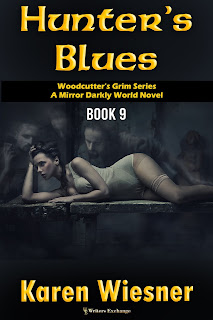 ** Loosely based on “Snow White and the Seven Dwarfs”. When the evil in Woodcutter’s Grim unleashed, humans turned into ghouls with the instinct to contaminate others. The Protectorate—the guardians sworn to protect the town—are all that hold the threat at bay. Guardian hunter Reece Pallaton discovers the source of the evil, the mirror that’s only the opposite half of the “glass darkly” world he lives in, and his own terrifying connection to both. **

I started outlining this book while I was writing my second Writer’s Digest Books craft reference, FROM FIRST DRAFT TO FINISHED NOVEL (which was changed back to its original title COHESIVE STORY BUILDING after I got the rights back to the book and had it reissued). I was planning to use HUNTER'S BLUES as an example for that writing reference, but never did. Basically, I got a lot of the outline written during that time, but it kind of fell into the background because I was working on the new craft book. Much later, I started thinking that maybe there was a way I could turn this into a Woodcutter’s Grim Series novel. In this "mirror darkly world"* of Woodcutter’s Grim, the Protectorate has become hunters, keeping the zombies (they call them "ghouls") that have proliferated on the Earth at bay, and it’s not a fun job even as it is a never-ending one.

*Star Trek has this whole "mirror universe" plotline that most of their series have versions of, in which the normal characters in the show have evil counterparts in a mirror universe. https://en.wikipedia.org/wiki/Mirror_Universe That's kind of what my Mirror Darkly World is grounded in. It's like a very dark version of the real world that all the previous books in the series were set in.

When I first decided to make HUNTER'S BLUES part of the Woodcutter's Grim Series, I choose a deeply disturbed obscure fairy tale about a woman who tricks her husband into eating his own son for the fairy tale my story would parallel, however loosely. Talk about dark! I couldn't come with any ideas in that vein though. "Snow White and the Seven Dwarfs" made so much sense, especially in light of who (and what) Tess (from "Beauty is the Beast" , Book 7, WOODCUTTER'S GRIM SERIES, Volume II).

The graphic on the cover of HUNTER'S BLUES really caught my eye when I stumbled upon it. Within the story notes I’d come up with, I had ideas about Reece disappearing for stretches of times, waking up and wondering where he is. This graphic gave me the concept of where he was when he disappeared and how seeing Shell “through a glass darkly” brought him back each time. While that's not the way the story ultimately worked out (it was his father who was trapped in an in-between world, mainly, and who used the mirror to look back on Woodcutter's Grim), I think the cover nevertheless works.

The development of this book was so strange. It never actually fit into Woodcutter's Grim per se, even after I finished writing it and it was published. In ways, the town of Woodcutter's Grim was like a futuristic version of the town in all previous stories in the series, so that's why, for first couple years after it was published, it had the subtitle of being a "futuristic" novel in the series. That was my attempt to make sense of how it fit into the series. But it didn't quite work. I didn't become aware until much later, when I began work on BRIDGE OF FIRE, Book 10 that it was wholly inaccurate. I realized then that the complication in describing the timeline is that HUNTER'S BLUES is set in a mirror world of Woodcutter's Grim.

When I was first outlining HUNTER'S BLUES, trying to figure out how all this was supposed to work, gave me endless headaches. More than once, I thought about giving up because I felt like there was no way to sort it all out. But I did eventually, and the explanation is in this graphic I created to make sense of it all: 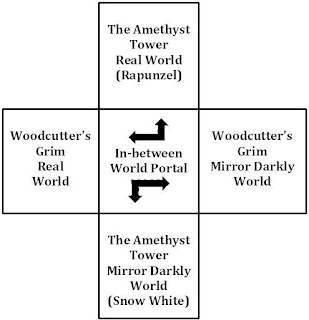 HUNTER'S BLUES is set in the Mirror Darkly World of Woodcutter's Grim (while the rest of the previous books were set in the Real World of Woodcutter's Grim). In the Mirror Darkly World, the Protectorate's unofficial guardian is Reece Pallaton (Gabe Reece is guardian in the Real World). Until I wrote BRIDGE OF FIRE, I didn't realize just how important the Pallatons would end up in the entire series.

An obscure and impossible-to-confirm origin story of Snow White says that the classic fairy tale was based on the life of a German countess. At the age of 16, she was forced out of her home by her stepmother. She ended up falling for a prince and, given the politically inconvenient nature of the relationship, the girl's disappearance was more than a little mysterious. Was she poisoned? The girl's father also reputedly owned a few copper mines that employed slave children who, through maltreatment, were severely stunted and deformed. https://random-times.com/2020/02/08/the-dark-origins-of-the-fairy-tale-snow-white-and-the-seven-dwarfs/

Reviews and Honors for HUNTER'S BLUES:

HUNTER'S BLUES is a dark tale and it even has zombies (or ghouls), which is very "un-fairy tale-like"! Do you like stories with zombies? Leave a comment to tell me about it!