Reviews have not yet been indexed.  To find them search for the Label, Reviews.

We looked at MARKED, #9 in Benedict Jacka's Alex Verus Series. 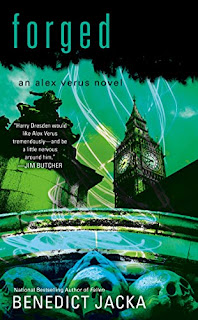 And here is #11 in the series, FORGED,  - which ends off with a lot more adventures in store for the intrepid team which the hero, Alex Verus, has put together.

This is not a Romance Series, but the plot is driven by iron-clad Bonds among individuals, some male, some female, some not human.  In this entry to the Series, we meet a self-aware Artificial Intelligence who willingly joins Verus's team after being rescued from the bad guys.

The whole novel (and series) is composed of fast-paced action scenes - with astonishing and unexpected weapons, skills, attacks, and mishaps appearing out of nowhere.

It all makes perfect sense when you understand that Alex Verus is essentially a "good guy" with his fanny caught in one horrendous bear trap and his goal merely survival.

He's not out to destroy, expunge, or vanquish the bad guys.  He doesn't want power over them.  He doesn't want to become the boss of the world or correct all the wrongs of the world. He just wants them to stop trying to kill him and his friends.  To move toward that goal, he has killed many, sometimes dishonorably.

In the ensuing battles, some of his friends get killed, some captured and tortured, (sometimes rescued by him or his other friends), and the total situation of the massive war that scampers across alternate-Realities changes with nearly every blow landed in combat.

The real meat of the story, though, lies between battles, between attacks, in the quiet moments when Verus cements his bonds with his friends, frenemies, and even former enemies, and potential Lovers.

This is well written, easy reading, with deep characters whose predicaments make you ask yourself hard questions about your own life, and what you wouldn't do to survive.

And it does pose good questions about how or if Love can actually conquer "All."  By the end of this Book 11 in the Series, it does seem that friendship has a serious chance at stopping the violent attacks, and might forge new alliances.

If you are trying to write a Romance, this is a good Series to study for ideas about what sort of "All" your Characters' Love might have to conquer.