The Reviews series have not yet been indexed.  These reviews often discuss topics we've explored in other sequences.

On many occasions, I've mentioned the well styled and absorbing Series by Simon R. Green.  They are Fantasy Action novels where enemy action is the driving force of the plot. 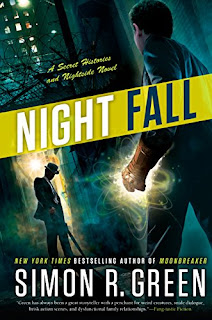 The Paranormal Romance at the core of the Secret Histories (and originating in the Nightside series) is between a Drood Family Field Agent and a Witch widely acknowledged as the most powerful Witch in existence.

This final novel bringing the two locations together shows how this Romance confronts its final test.  The previous Secret Histories novels show how the Relationship between Drood and Witch develops from "mortal enemies" to "lovers" to "partners" to "married."

The long, complex novels give the writer space to set the tempo of change in both Characters to something that seems realistic. Each of them must change, mature, grow, come to understand their world differently, then they must become a Couple.  All of this maturation and change is handled stepwise in a psychologically plausible way.

The action and fantasy writing, plus the deep and solid characterization are what have made these two series extremely popular, hitting The New York Times Bestselling status time and again.  They're well constructed, tightly woven, with elements of Mystery and Suspense that you get addicted.

When you spot the Simon R. Green byline, you look forward to a visit with an old friend, his allies and enemies, and his personal evolution as a person as well as a member of a difficult family (filled with difficult but lovable people).  And none of the books disappoint that expectation.

As I've long understood, both series as well as Green's ghost-hunter series, belong in the same "universe" -- a well crafted, complex, universe with magic and supernatural creatures as well as inter-dimensional intrusions into our world.  The "rules" Green teaches you persist with logical consequences you can anticipate (dread) and remember.

The imagery is vivid, the banter up to the style of Buffy, The Vampire Slayer, and the Characters (even the bit players) memorable.

The tongue-in-cheek take-off on well known Series (like James Bond) is always good for a startled laugh, and provides a feeling of camaraderie with the Author who tossed in a bit from the reader's everyday life.

In this concluding novel, Green brings together the Characters and Locations of the two (otherwise separate) series, Secret Histories and Nightside.

The Nightside is a magically created segment of adjacent reality, nestled in and accessible via the city of London in England.

The Secret Histories begin in London, and are about a Family (the Droods) fighting to protect our world from anything that might threaten us.  The Droods wear "golden armor" provided from another dimension by a (presumably) friendly visitor befriending the Family.

The Nightside is the location of a "Free Port" such as Pirates might create, a place where "Law" is sparse and just barely enforced.  It has many Magic features and caters to every warped taste in entertainment.

Green finishes off both series by showing what happens when The Nightside boundaries expand (inexplicably) and the Droods invade to put things right (the Drop idea of right, you see).  The Nightside inhabitants object to being invaded, while the gods who inhabit a particularly famous tourist street, desert the Nightside (inexplicably), so much of the "power" has gone.

Read to find some of the answers and explanations.

There is an afterword that wraps up some of the loose ends -- there could have been more novels in the joined-universe, perhaps, but here is where the Romance becomes the "Happily Ever After" which makes Night Fall the correct place to end the Series.

Therefore, this is another long running, successful Paranormal Romance Series to study carefully. The "world" you build around the Characters is a big part of what makes a novel or series appeal to a broad readership.  Most people who buy books read more than one genre - at least over a lifetime of reading.  Often people read the same genre for years, even decades, before branching out.  Give your readers a reason to branch out, and they will memorize your byline.

Here are some previous posts on this blog exploring some techniques in how to create the sort of addictive reading experience Green has managed.