Part 1 is found at:
https://aliendjinnromances.blogspot.com/2018/12/how-to-use-tarot-and-astrology-in.html

In Part 1, we looked at how to do science using Astrology and History.  The process is simple.  Use what science (archeology, paleontology, literary preservations (such as stone engravings, or the Bible, Dead Sea Scrolls) is using for best current theory, then correlate that with a speculative application of Astrology.

Astrologers aver that planets have no effect on humanity (or do not correlate with Events in history) before they are "discovered."  The "What if ..." we are playing with here, is "What if modern Astrology is all wrong?"

What if there's something to Astrology, but it isn't what the experts think it is, and it isn't what marketers of astrological "wisdom" peddle it as?  What if ...?

What if this speculative idea depicts the actual real world, not some alternate or fantasy reality?

So we are exploring what if planetary movements have indeed correlated with historic movements for thousands (even millions?) of years.

One of the most recently discovered planets is Pluto -- and even recently, after decades of calling it a "planet" astronomers voted to demote it from planetary status (for various reasons, all of them perfectly comprehensible).

Neptune and Pluto are in fact different from the rest of our Sun's planets, but as far as their timing the cycles of human history goes, that probably doesn't matter.  Or it might matter when we find out more, and see how their orbits correlate with some mystical energy ebb and flow -- who knows?

Since nobody knows, we get to speculate.

So we pointed to History (as well as it is known) in Part 1, and correlated the general outline of the pattern of Events in the current news with Events of centuries ago.

Human mass migration (and subsequent interbreeding), conquering, flowing around the globe, often prompted by glaciation, usually in response to a search for resources (and riches), has been mapped by paleontologists and archeologists.

The search for the origins of humanity, or modern humanity, is going on using DNA to trace population movements and interbreeding.  We all bear traces of pre-modern-human DNA.

So humanity survives while thousands die, even huge percentages of a population can die off and humanity still survives (civilization not so much.)

We look at the Headlines of 2018, and look back for when "this" happened before.  We have to think in terms of generations, even centuries, to see the patterns we can use to speculate about.

Currently, humans are once again upending the forms and purposes of government.

We've noted how this urge to invent or reinvent governing forms has happened in cycles of about 248 years (irregularly!  Pluto's orbit is long ellipse - speculated to be a "capture" by our Sun).  It's "speed" in orbit is not regular -- it goes faster, then slower.  If we can't think of something new, we stage a revolution and behead the King, get a new King and start over.

The USA is about up to its Pluto return (where Pluto is at the same degree it was when the country was born.)

Meanwhile, the other planets have whizzed around more times than in any one human life-span, creating all sorts of "well, it's different this time" Events.

Yes, it's always different -- but underlying, there is a trace of a repeating pattern.

This time, we will go exploring Space, trying to live on space stations (do read C. J. Cherry's Foreigner Series), and alien planets.

Here's the Amazon link to the list of books in the Foreigner Series.
https://www.amazon.com/gp/product/B07FN1PN5Y 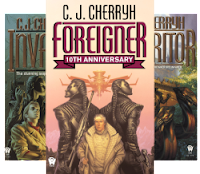 The Pluto in Aquarius motivation will carry us into space by the urgent need of the generation born with Pluto in Aquarius to seek FREEDOM, to find identity, to be individually sovereign and collectively free to practice any religion.

The need to get away from other humans waxes and wanes, but when it peaks it is very intense.

One can speculate that Climate Change will make Earth less friendly to human endeavor and drive some of our more freedom-seeking individuals to find a way to get OUT OF HERE.

But we have seen that living weightless in orbit is destructive to the human body, cells lose integrity and function, and ills accumulate.  One can speculate that gravity varying too far away from Earth's (maybe the Moon, or Mars?) might be just as destructive to human cells and unlivable.

That's just another problem to be solved -- and our labs are hard at work on mastering cells, and creating whole organisms.  It's just another step toward freedom to be able to re-engineer humans to fit other environments.  Many Science Fiction novels have centered on that.

You know the people doing this work on genetics also read/watch science fiction -- they grow up wanting to do what the books depict, just as the current world is largely patterned on a drive toward STAR TREK (except we're trying to sidestep the genetics war).

What do you want this current crop of babies with Pluto in Aquarius to grow up wanting to do?

On the straight line extrapolation from where we've been (exploring and conquering The Americas) to where we are (fighting each other for resources, trying to damp climate change thus depriving undeveloped countries of resources), to where this leads "If this goes on ..." -- we can only see exploring space.

But how do we do that?  What do we try that fails or is too expensive?  What do we invent to sidestep that problem?

B) sending remote controlled Robots to scout (doing that already)

C) inventing Artificial Intelligence so we can send them exploring?

Well, scientists are madly working on AI, and business people are striving mightily to make enough profit off the first attempts to finance further inventions.

But what if AI is more than "Intelligent" -- actually becomes "conscious" and even "self-aware."

What if we send some AI equipped ship out beyond the beyond, and as it goes, it remakes itself and becomes self-aware?

What if biology can't reinvent human cells fast enough to let humans live on Mars?  So we send AI to colonize and mine Mars, the astroids, etc for the raw material we need to fix Earth's climate disaster?

We're close to autonomous cars.  Autonomous AI isn't that far off.  Pluto is slowing in orbit and will be in Aquarius long enough for the general urge to explore to drive us beyond the beyond.

When the departed group (which might be human+AI+whoknowswhat), returns to Earth what will they find? (yes, PLANET OF THE APES scenario asks this question).

All space travel is time travel, too -- space and time as we've discussed while pointing to various articles, are deeply intertwined. There might, in fact, be no difference between space, time, and gravity.

All of this speculation is to be done with the various novels and series I've reviewed here -- most especially those I've tagged as not being Romance at all.  Those anti-Romance science fiction novels are read by the current people doing the work on genetics and AI that we've discussed here, in Part 2 of this series.

Here are a few of the recent reviews of books where I discuss many of these issues - love stories, yes, but not focused on Romance.

And this one with a pretty strong setup for a hot Romance:
https://aliendjinnromances.blogspot.com/2018/12/reviews-43-late-great-wizard-by-sara.html

And this one with serious Romance plotting:
https://aliendjinnromances.blogspot.com/2018/08/reviews-39-souls-of-fire-series-by-keri.html

Think about all the other books you've read -- compare those written long ago with those currently being published, and consider two things:

Here are some of the Astrology Just For Writers series discussing Pluto and how to use Astrology in fiction writing without having to learn any.

Re-read this blog entry about Pluto and Expository Lumps in writing:
https://aliendjinnromances.blogspot.com/2011/08/astrology-just-for-writers-part-10.html

And here is the key one -- discussing Pluto's position by sign as each generation is born, and how you can use that information to target a readership, and extrapolate what those children will do when they grow up.