Previous parts of the series on Settings including a Guest Post by J. H. Bogran:

And this is Part 5 of the Settings Series.  News happening at the CERN Large Hadron Collider might make you a best selling writer. 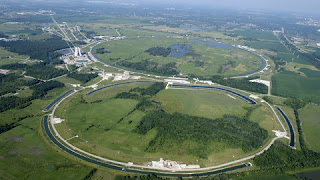 We have said many times that Setting does not make a story belong to a particular genre.  But if the story is tailored by the setting, it can indeed edge into a defined genre.

For example: Gene Roddenberry sold Star Trek as "Wagon Train To The Stars" because the Western TV Series Wagon Train was becoming a long-running legend in TV broadcast annals.

Usually, when you say, "Science Fiction Romance" to an editor, they think Barbara Cartland In Space.  It just doesn't work.  You get caricature or comedy.

However, if you create Soul Mates who haven't found each other, yet, and engage them in a Science Project -- a real world, cutting edge, theoretical problem that must be solved for some pressing reason, and put them on opposite sides of an argument over which theory is correct, and what proof would do to the world -- aha! Then you have genuine Science Fiction Romance, not another pedestrian love story.

So take two scientists and call me in the morning.

Here is a real world headline to rip your idea from.

-----quote-------
A few years from now, if a crew of physicists gets its way, a squat building will rise above the border between France and Switzerland. This warehouse-size annex will join a scientific facility so large it crosses national borders. And, if the researchers proposing the construction are correct, it just might find the missing pieces of the universe.

Separated by a few hundred vertical feet of bedrock granite from the Large Hadron Collider (LHC), the new building would contain a scientific instrument called the MATHUSLA device (Massive Timing Hodoscope for Ultra Stable Neutral Particles), named after the longest-living man in the Book of Genesis. Its job: to hunt for long-lived particles that the LHC can't detect itself.

There's something strange about the idea. The LHC is the biggest, baddest particle accelerator in the world: a 17-mile (27 kilometers) ring of superconducting magnets that, 11,245 times per second, flings a few thousand protons at one another at significant fractions of the speed of light and then, whenever anything interesting happens, records the result. [Beyond Higgs: 5 Other Particles That May Lurk in the Universe]

Set your story at the site of this new installation, and inspire your readers to research and learn about particle physics and computer coding.

Now, as an exercise, use some of the themes suggested in those posts, and the Setting suggested here, to do outlines for 10 different Science Fiction Romances crossing time and space, and dimensions far-far away.