What Futurologists Do Part 1

What Futurologists Do
Part 1
by
Jacqueline Lichtenberg 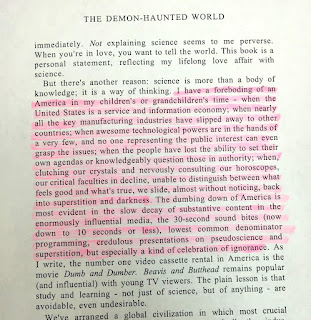 It is a quote from a book by Carl Sagan, titled The Demon-Haunted World and the post had amassed over 27,000 Likes.

Would you like to sell another 27,000 copies of your latest novel?

Study this quote, and note it was written before 1996 - travel back into history and study the previous 10 years Sagan had just lived through.

One more consideration -- think about what actions the 20-somethings of 1996 believed would cause the result they wanted.

Sagan is talking about a mis-match between how the currently emerging into power generation thinks the world works, and how it actually does work.

And by "the world" I mean physics-math-chemistry-spirituality.  Notice his disparaging remark about mysticism, which you might expect of Sagan.

By "the world" today most people mean politics, social justice, what the majority have the right to take from the rich minority - the 1%, and the loss of a distinction between a right and a privelege.

Note what information he had to work with, and what conclusions he drew.

What can you write today that will be quoted on Twitter (or its successor) in 2039?

We are convinced Love Conquers All -- but we rarely consider what "all" there is to conquer.

We hear politicians adamantly affirming they "fight for you" -- for your rights, for the betterment of your life -- but they never say who they are fighting against or define precisely why that enemy of yours is out to destroy you, and why you can't defend yourself without their help.

And we continue to read novels about Love Conquers All -- most often without actually defining what there is that has to be conquered.

Write THE definitive novel about "the all" that must be conquered, define it, nail it, name it, and show its weakness, show how it can be conquered by Love.

Consider whether you are the enemy that must be conquered by love.

Look at what Sagan wrote -- he sketched an "all" that needs conquering by Love.  Consider how that can be done.