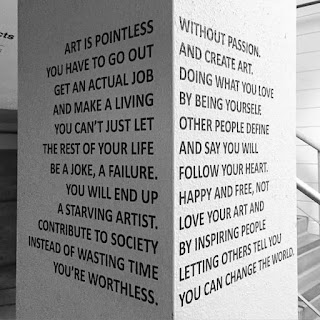 The two panels of this graphic are neatly displayed as two sides of the dilemma not back to back, but at an ANGLE.

In Astrology these two statements represent two Houses (everyone has all 12 Houses, so it is there inside you somewhere).

The "Get A Real Job" attitude is more Capricorn or Natural 10th House -- the Cardinal Earth sign that is ruled by Saturn and tends toward the practical.

The "Without Passion" side has the lofty incoherence of Neptune, which as I've pointed out previously represents the mental condition that we describe in Romance as being "In Love."

Sex is the Creative act -- which other people do try to constrain (Saturn) and define (Saturn) and manage for you (Capricorn).

Two people in love inspire others in ways that prove, over and over again, that Love Conquers All.

And that does, indeed, "change the world."  Romance, mellowing into Love, settling into Happily Ever After, raising children who understand Love and spread it through the world, all that changes the world.

Capricorn/Saturn is famous for resisting change -- but also then insisting on change, sometimes massive, sometimes painful change, about every seven years.

Pisces is the Mutable Water sign -- and interestingly produces many Engineers, mechanical geniuses, as well as artists.

Pisces is opposite Virgo, the detail-oriented-sign.  Pisces blurs and blends details so they are not distinct.

In other words, Pisces is bound to its opposite, Virgo, and is 60 degrees from Capricorn -- which visually seems to be about what that image corner shows, an oblique angle.  If it were a "right angle" we couldn't read both sides so easily.

So what's opposite Capricorn?  Cancer!  The sign of Home, the basis of Life, family, parents/children.

So Capricorn, the "Get a real job" attitude is opposed by Home-Making (Cancer), and pulled off balance by creative imagination (Pisces).

Pisces is the Natural 12th House -- the summation of the meaning of your life.

Noel Tyl says that the reigning Need of a Natal Chart is shown by the position of the Moon -- ruler of Cancer.  The ruler of the opposite House, Saturn organizes resources to fulfill that Need using the Ideals represented by Neptune.

Ideals are generally considered "impractical" -- and Saturn is the distilled definition of the Practical.

That oblique angle relationship between the practical Capricorn and the impractical Idealism of Pisces depicts the perfect conflict for a Romance.  You just have to find a resolution you can convince your readers to believe.  Neptune is all about belief.