Reviews 10: Shadow Banking in Fantasy And Reality by Jacqueline Lichtenberg

Reviews 10:
Shadow Banking in Fantasy And Reality
by
Jacqueline Lichtenberg

The old saying "If you want to understand what's really going on: Follow The Money." holds especially true in Fantasy novels or where Magic is involved.

Gordon R. Dickson tacked the financial economics of Magic in The Dragon And The George.

And now Simon R. Green (one of the best writers of campy Fantasy working today) has added a novel to his ongoing series called SECRET HISTORIES about the Drood family policing the unseen world around us, buried under our feet, and in the Nightside.

This one is titled CASINO INFERNALE -- and it's a breezy fast read, told entirely from one point of view, Eddie Drood aka Shaman Bond.  It's very James Bond like, except with fantasy creatures.

It's not a Romance, but it has a whopping good LOVE STORY, and a definite "relationship" axis to the plot.  This is a man and a woman who team up, using different skills, to confront enemies much larger than both of them, and win.

The plot of Casino Infernale is pretty simple: Shaman Bond's mission is to break the bank at an annual gambling casino financed, run by, and profited from The Shadow Bank.  If he can pull that off, he'll stop a magic-fueled war.

The Shadow Bank's actual operators, owners, and policy makers are revealed at the end, so I won't tell you about them.

The term Shadow Bank is sprinkled liberally through the book.  It's attributes shadow our real-world Shadow Bank.  The whole novel is political satire wrapped in James Bond camp and a pure send-up of the serious view of the world.

I do highly recommend all Simon R. Green titles, but particularly the Secret Histories and the tales of the Nightside.

Green has accomplished just what I described in the series of posts on Depiction.

And he has done all that while "ripping from the headlines" -- as I've described that process in many prior posts here.  If you aren't a technician of writing craft, a wordsmith, very likely you will never see him doing any of this.  All you see is a rip-roaring good read.

Here are some of the places to learn about the real-world Shadow Banking system and how that interweaves with Politics.

Remember, when writing a Romance Novel, Romance by itself will produce a very bland and placid product.  Add religion or politics, and you add a spark to your tinder. Splash on the accelerant of sex, and stand back!)  But the most potent ingredient in Romance is Money, a real-world proxy for Power.

"Love" is 7th House, Libra, Venus, and all things peaceful and beautiful.

8th House is opposite 2nd House - and both are about the tensions and Powers of Money.

2nd House is Banking.  8th House is Shadow Banking.  They are inextricably intertwined in very mystical ways -- Simon R. Green has revealed mysteries for you.

Here are some websites where you can find information on Shadow Banking in our real world.  If you dig, you might come across some funding trails that lead to politics.

Here is a google search -- look at the images, not just the websites.

And in particular this diagram from
http://www.brianhayes.com/2010/11/

The graphic depicts how money goes round the modern world. Most of the poster is dominated by shadow banking systems. These flows are so extraordinarily complex that hundreds of boxes create a diagram comparable to the circuit board.

It should be mandatory reading for bankers, regulators, politicians and investors today, a reminder of clueless investors, regulators and rating agencies.

“After all, during the credit boom, there was plenty of research being conducted into the financial world; but I never saw anything remotely comparable to this road map.”

And the larger image is from
http://seekingalpha.com/article/238140-how-big-is-the-shadow-banking-system

Seeking Alpha is a legitimate and very insightful, informative and very often correct source for information on how our Stock Market moves and why.  They "follow the money."  And they try to get ahead of vast movements to show you where you can find profit investing in companies that have volatile stocks.

Here's my favorite chart. You can stare at this for hours and still find new connections. 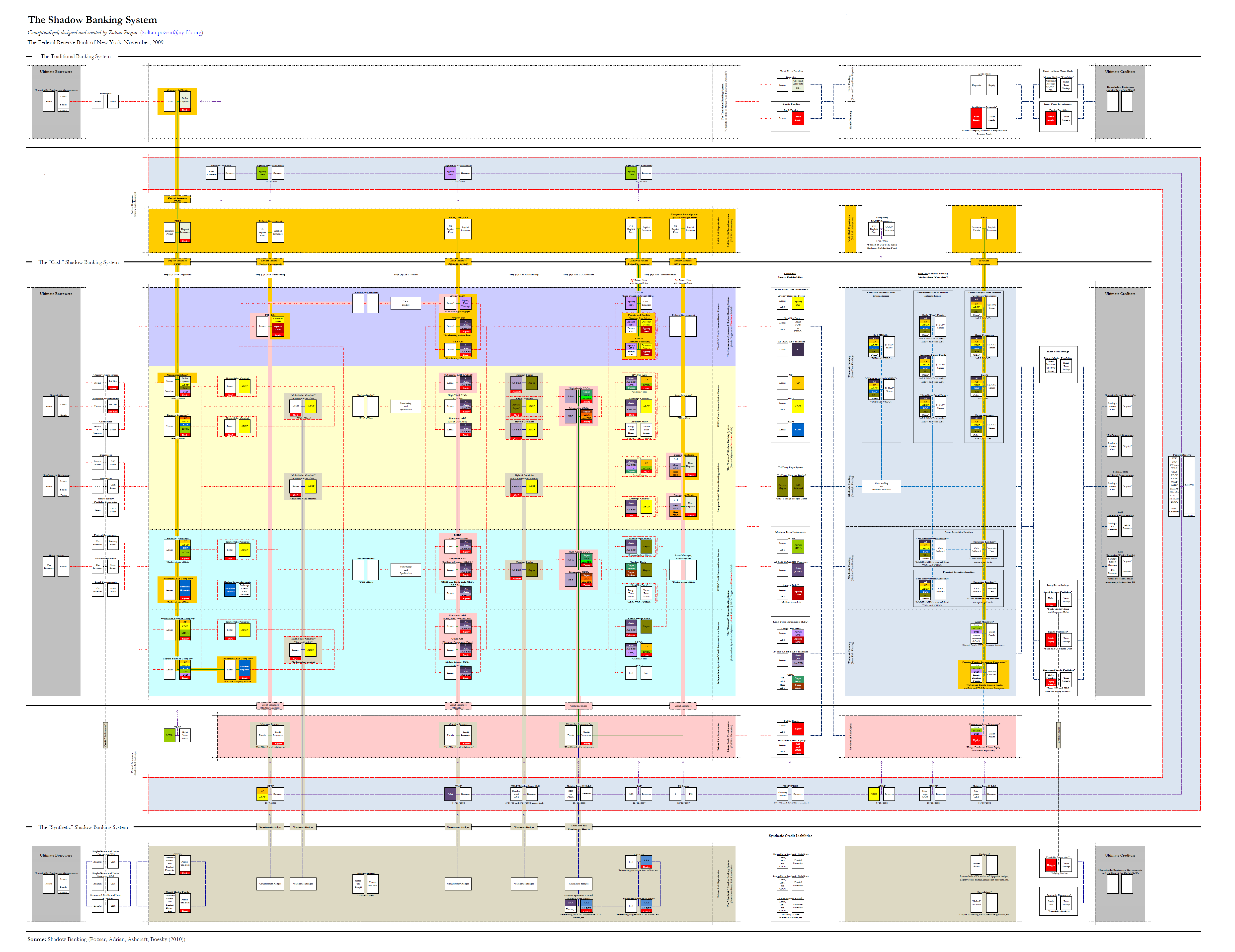 There are many graphs posted on the web.  Dig through Google and Bing to find more.