Worldbuilding with Fire And Ice Part 4: Storms of Death 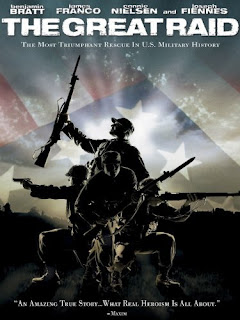 In that listing, I skipped the previous posts in this series, which includes the explosive mixing of Politics and Religion, Fire and Ice indeed:

Now we'll extend this series to talk about sex and violence, love and war, Romance Amidst Destruction,   about how we, as human beings, come to understand not just "the meaning of life" but the meaning of our own personal existence.

That very personal connection with the purpose of life is what all good stories are about.  Story is about how a character, any character, comes to understand their own idiosyncratic, answer to these questions of "ultimate concern."

So we're going to look at a war movie (I do so love a good war movie, any war!)

This one under our microscope is the 2005 film THE GREAT RAID.

On Amazon you can rent it cheap.

I'll include "spoilers" in the discussion below, so if you haven't seen this film, at least go read about it.

This is a 2005 movie, and should be a  10-star film on IMDB's scale, but it's pulling only 6 stars at IMDB at the moment.  It has a few scattered mentions of God, a Catholic church (of which there were many in that area of the Philippines at that time), and a red-hot Romance without a preponderance of naked sex scenes.  In fact, the two lovers (man and woman, where the woman is married to someone else) never really lay eyes on each other during the film until the end, and there's heart-wrenching disappointment at the senselessness in who dies and who survives.  She, however, is a hero in her own right, as post-1970's female characters are supposed to be.

Early in this series of writing tutorials on Alien Romance -- science fiction romance, or fantasy romance, or Paranormal Romance -- I mentioned that Romance writers who dive into the established field of Science Fiction and Fantasy often get readers pointing fingers of ridicule at them.

My aim with these posts on Worldbuilding is to remedy that situation because what I've always been writing is actually Science Fiction Romance, but with the Romance part disguised so that Science Fiction editors wouldn't necessarily notice it.

I grew up on nuts-n-bolts SF, and loved every bit of it, BUT was just deeply convinced that "they" (the young guys writing that stuff) were doing it "all wrong."  And what they did wrong was the Relationship part, and the total absense of Romance.  Romance is what fuels every human endeavor, and Love is what all life is about.  Love is what the material universe is made out of -- it is the very substance of the universe.

That is what I understood, and what I wanted to see in the fiction I read, but I could not abide "Romance genre" writing that excluded nuts-n-bolts science as well as fantasy premises about "The Ineffable."

In other words, as I saw it, the main failing of early (1950's) science fiction was a lack of WORLDBUILDING.

What I saw as the main failing in attempts by (trained, expert and wonderful) Romance writers to set a story on a space ship, or in a parallel universe, back in time, or in a dimension where Magic works, was a lack of WORLDBUILDING.

Not all writers fail in that dimension.  There are multitudinous examples of towering successes, but how does a new writer learn to a) do the worldbuilding and b) not include too much of their wondrous worldbuilding and impede the story/plot pacing?

There is a tense balance point, a traveling point as dynamic as the point at which a figure skater's blade touches the ice -- or skims the melt above the ice, just kissing the medium and flying in graceful swoops above that "reality."  A writer crafting a story has to do that, but first the writer has to run the zamboni over his created world.  That last polish before sending the characters out to skate a composition is often the step new writers leave out.

So we're going to look at this "incorporation" process -- how to blend all the elements you've built into a platform that won't attract the audience's attention but will support your characters.

I'm particularly focused on this right now because I'm involved in the worldbuilding portion of constructing a "shared world" in which many anthologies of stories will be written.

The world we're building is called SILVER MOON and the first volume, now being written, is called A GATHERING STORM.  That storm is a war where the entire population of a north section of a continent goes to war with the population of the southern region.  That and the location of a few major cities, and the co-existence of both magical and scientific philosophies was all we started with.

The salient issue for worldbuilding is that this is a world about to go into a massive paroxysm of war, so the worldbuilding writers contributing stories are examining the sources of massive wars, population migration, (the 4 Horses) and the effects of such Events on cultural elements (such as burial customs, detective work both government official and private eye, prophecy, beliefs, the spur to the development of science for use in warfare, and how normal people just hacking out a living manage to survive it all.)

Each of so far 28 writers on the team have vastly different life experiences, educational backgrounds, and writing genre expertise -- all different sorts of genres, so this world's anthologies will be of various genres.

Living among expert worldbuilders brings some of these worldbuilding techniques to sharp focus.

You can start with the physics of a star coalescing out of space dust, or of a planet heaving and seething to develop oceans enough to spawn life, of life evolving along certain tracks leaving the dominant intelligent species with biology that isn't human, and then let that biology spawn cultures (plural; cultureS, lots of them that clash and go to war).

Or you can start with 21st century Earth humans, plain people we know, and destroy everything (post-apocalyptic) then start over with or without remnants, legends and memories of the prior civilization.
There's no telling how many times such things have happened on Earth alone, nevermind on all those planets they are now discovering for all the new SF/F/Romance writers to play on.

In my review column for themonthlyaspectarian.com I write about how the best SF is built on current headlines, and non-fiction books about various international situations, such as the monetary crisis, or national situations such as "lets reform the tax code."  Ray Bradbury, who passed away in June, 2012, wrote straight-line extrapolation of his current headline issues and became famous for his cautionary tales and grimly horrid future visions.  His novels stand in contrast to Robert A. Heinlein's novels, ript from the exact same headlines and extrapolated in a hyperbolic curve into a much brighter and more optimistic view of the future.  Many of Heinlein's visions (the moving sidewalks in airports for one) have come true, while Bradbury's visions have (thank God) not come true entirely, (yet).

International Headlines and non-fiction about the doings of humanity are good starting points for worldbuilding.  Well-read readers will find it easy to slip into a world that is built from the familiar headlines, but does not seem to be related to their reality.

No matter where you start worldbuilding, you end up writing about LIFE.

Here's an excerpt from an article posted online by a Rabbi who was given 6 months to live by his doctors.  The article has the eye-stopping headline, HOW TO DIE.

http://www.aish.com/sp/pg/How_to_Die.html
----------QUOTE----------
Today I continue, thank God, to feel perfectly fine. My team of doctors is still wondering how that happened. I tried to explain to them that I am on a medication that has proven successful for thousands of years, although it's healing properties haven't yet been scientifically identified. Having successfully prescribed it to others many times, I put myself on the "Recitation of Psalms" program. I asked friends and family to join because I have oft times witnessed the miracle of the power of prayer. And although I continue to be aware of the fact that some day I will die, I continue to go about my life's tasks of studying and teaching Torah, of lecturing and writing in the hope of bringing people closer to God and to Judaism – because I'm convinced that it is in the merit of mitzvahs that I can best hope for continued miracles.

When you write about death, you come face to face with the inevitable human questions about "what comes after death?"

I can't answer that question -- at least not any better than you can!  So the rest of this discussion will be on fitting your worldbuilding into the audience's mindset and changing assumptions.

We'll pause here until next week, so you have a chance to watch THE GREAT RAID.  As an exercise in writing craft, note down the lines of dialogue that leap out at you, the scenes that bespeak the 2005 origin of the film about the 1940's, and what all that means about the books that will be popular in 2015.