Horror writer Jonathan Maberry has edited a shared world anthology called V-WARS, based on an innovative approach to vampirism as disease or mutation. The book became available in comic stores and in Kindle format on June 27 and will have its general release on July 10. Here’s an excerpt from my interview with Jonathan that will appear in the August issue of my monthly author newsletter:

JONATHAN MABERRY: In V-Wars we explore how science might explain the worldwide presence of vampire legends. Melting arctic ice releases an ancient virus which triggers dormant DNA (junk DNA). This DNA was once responsible for the phenomenon of vampirism, but over the centuries all vampires were hunted to extinction. Now the disease causes mutations which transform a percentage of the population into vampires. The thing is, vampire legends are different in every country. The vampires of Japan are different than the vampires of France or Peru or Alaska. So, as the disease manifests, people become the kind of vampire typical of their culture.

Some people act on their new predatory natures and begin hunting humans. Some resist those urges. The humans react with typical fear and aggression, so we have atrocities and violence on both sides, and that escalates into full-blown armed conflict.

The stories of V-Wars are told by eight writers: Nancy Holder, Yvonne Navarro, Gregory Frost, Scott Nicholson, James A. Moore, Keith R. A. DeCandido, John Everson and me. And we had a hell of a lot of fun with this project. 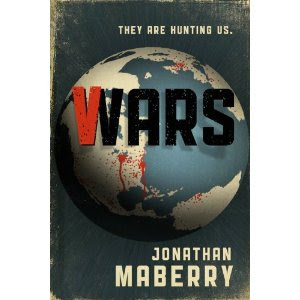 In case you want to read the entire interview, this is the URL to subscribe to my free newsletter:

News from the Crypt

The Amazon page for V-WARS: