The governments of Earth are desperate. They are thrashing around, grasping at straws, manufacturing crisis after crisis. Global warming. Banking. Manufacturing. Avian/swine flu. STDs. Terrorism. Deficits. Anything to increase government control over massive populations, to invoke war-powers acts, to oblige the public to accept 1984-like surveillance and also semi-mandatory mass injections of goodness-knows-what.

This isn't a whacky conspiracy theory. We're imagining. This is an alien romance blog, remember.

New, never before classified cloud formations are discovered. For instance, Asperatus. (I'm interested in clouds. It doesn't mean that they mean anything in particular, but they have potential as hiding places, and as delivery systems, and as shields.)

Meanwhile, UFOs are filmed over Ireland, and in other places. They move like nothing on earth. They're not configured like any super-power's secret aircraft or ABM.

The movie industry puts out movie after movie about aliens. Many are benign. Some are blue. Some have bony heads. Some are Messiah-like ie Klatuu (The Day The Earth Stood Still).... see a partial list of all the movies with aliens http://en.wikipedia.org/wiki/List_of_films_featuring_extraterrestrials

Around 250 of them. Unfortunately, they are listed alphabetically. It would be really interesting to list them chronologically (with a synopsis) to see whether the portrayal of aliens has changed over time,  or whether there is any correlation between UFO sightings and subsequent sympathetic (or unsympathetic) alien characters.

I digressed. Those are really interesting lists, though.

Suppose there really are aliens, and suppose they are very much like us... only more advanced. I presume that aliens would wish to negotiate with us, and that they'd prefer to negotiate, say, with someone like Her Majesty, The Queen of England, rather with an ephemeral, quarrelsome rabble who might be voted out of office before any interstellar treaty could be ratified.

What would be the impact on all of us if these superbeings were all one racial type, and suppose that their one racial type was like our popular image of one of the three Magi? 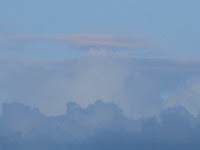 This is a photograph of a lenticular cloud, but suppose it were a huge, god-like hologram. Imagine what would have happened if, at the same time that this appeared, a voice boomed from the clouds in which "he" is sitting. Suppose it did, maybe over some secluded part of Russia, where former President Putin was fishing, and over Crawford Texas where President Bush was clearing scrub. Or perhaps they appeared to Al Gore. Or Jeff Bezos!

Would international statesmen decide that it would be in Earth's best interests if our one-world leader looked as much as possible like the aliens? How would we achieve that?

How would we manage a one-world government or a one-world leader? It seems that every attempt at global domination by one tribe or another has eventually failed, no matter how benign in concept at the outset (or not!)  Plato's Republic, The Third Reich, the Roman Empire, Genghis Khan's Empire, the USSR all collapsed. Maybe Lord Acton's Dictum is all too accurate. "Power tends to corrupt, and absolute power corrupts absolutely."

If we were to try again, (because we really need the aliens' help) how would we go about it?

The options would include an election from among world leaders similar to that of the Pope as shown in The Shoes Of The Fisherman  http://movies.nytimes.com/movie/44428/The-Shoes-of-the-Fisherman/overview

Another possibility would be the mystical elevation of a child, much the way a new Dalai Lama is found.
http://www.guardian.co.uk/world/2008/aug/27/tibet.china1

Would the election of a virtuous child as temporary Queen and figurehead, as in Star Wars, work?
http://www.starwars.com/databank/character/amidala/
Only, I guess, if the aliens were childlike --or hobbitlike-- in appearance.

One of the first issues to solve would be whether humans would want a temporary leader (elected, or rotating) or someone appointed for life (a monarch, a Caesar, a Protector, a Chairman, a Dictator, a Big Brother, an Emperor). This choice might be influenced by the longevity of the aliens, and the need for stability. Then, we'd have to decide whether the leadership would be heredity, and what legal and/or religious mechanisms might need to be in place to remove unsatisfactory leaders.

This isn't one, but it's interesting http://www.sacred-texts.com/bos/bos164.htm


If the aliens were cool with elected bodies, we'd need a global version of Articles of Confederation http://www.usconstitution.net/consttop_arti.html

Otherwise, if they insisted on a one-world-leader, we'd want a global Magna Carta
http://www.middle-ages.org.uk/magna-carta.htm

If we look to literature, there's Machiavelli's model, and that of 1984 and of Brave New World. We see worlds ruled by consortia of business leaders, cartels, single imperial leaders; by parliaments, by oligarchies, theocracies... the Wiki list is comprehensive
http://en.wikipedia.org/wiki/Government

In Mary Doria Russell's The Sparrow, the world is ruled by the Jesuits and the Japanese. In Jack Vance's Demon Princes worlds, distant planets were settled (much as North America was) by exiles and evangelists of various religious denominations.

Is there anything we haven't tried?

Should we try, anyway? If these imaginary aliens want us to have a one-world government, is that a good and sufficient reason to give it to them?

Posted by RowenaBCherry at 11:41 AM