Science: Fact is funnier than Fiction 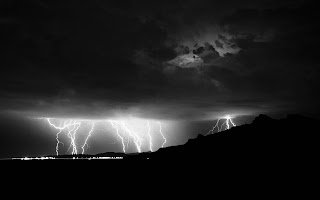 I'm always on the lookout for unusual, but plausible tricks to play on my heroes, although I balk equally at doing permanent damage, and at torments that result from stupidity.

Above all else, I require my SFR heroes and villains to be intelligent, effective and competent. Therefore, if my hero is going to suffer, it has to be a richly deserved come-uppance for his own arrogance, vanity, over-confidence, bad habits, or sexism. More often than not, I will strike him creatively below the belt, but my heroines… won't.

I love to start with a scientific fact, and weave it into an intelligent but humorous, character-driven Science-Fiction Romance plot. For instance, in googling "lightning" I was delighted to discover:

"Males are struck by lightning four times more than women."

My own, more chaotic theory is that men bring Nature's wrath upon themselves owing to their size, physique, nature, and inclinations. They tend to whip out their whizzers and attempt to kill trees and offend dryads when Nature calls.

They do this standing up, creating a grounding arc of conductible matter, standing under trees (which is known to be ill-advised when a storm is brewing.) Ladies with a going problem on a golf course usually squat, if they cannot wait, which is considered a much safer attitude.

However… being of an inquiring mind, I proceeded to do a Boolean search  [men struck by lightning while urinating OR men electrocuted while urinating]. My search was highly satisfactory, not to confirm or refute my theory (which it didn't, at least on the first two pages), but because my search led me to some fascinating bits of esoterica.

The burning question (more specific than mine) Has a man been struck by lightning while urinating off a cliff ... went unanswered. I'm sure that was asking for too much information, anyway!

Apparently, a child "was struck by lightning while urinating on an electric cattle fence in rural Texas". And the same happened to a man in Montana. Then, there are men who mow the lawn during a storm, while listening to their ipods, and when struck, sue Apple.

I came across several eminently sensible Navajo Taboos about appropriate behavior during thunderstorms, and also about poetic justice for those who are cruel to very small animals.

"Do not do a rain dance during a rainstorm because you will be struck by lightning."

In fact, I am working on a twist to this one for my next alien Djinn romance "Grand Fork". My heroine does the equivalent of a rain dance. The hero is struck.

"Do not urinate on an anthill because you will have trouble going to the bathroom."

If there were any truth to that, maybe as part of Health Care reform, patients might be required to wash away a few anthills before their treatment could be escalated to a prescription for Flowmax (or whatever it is called!)

PETA might object. So might the EPA…(please follow this link for news of the EPA granting a Presidential award to someone who came up with a way to stop animals urinating on trees!) Imagine! Perhaps you can see why my imagination has been described as Monty Pythonesque on more than one occasion. Science is such fun!

Even more to my taste is this site:


WISCONSIN – "A man will spend 20 days in jail for urinating on an ATM machine. Apparently [the gentleman] became frustrated when the machine wouldn't give him any money and proceeded to pee all over the machine. Unfortunately, for [the gentleman], a security camera recorded the whole thing...."

He was lucky. A skinny dipper in New York State came away with less than a whole "thing" when

"… a giant snapping turtle used part of [the gentleman's] anatomy as a meal. [The victim] later stated, "I felt this excruciating pain in my groin and when I got my bearings, I realized a turtle had bitten my testicles and swam away with them…."


Naturally, I cannot introduce a successful snapping turtle into a Romance novel, because his happiness would tend to interfere with the traditional Happy-Ever-After of a Romance, which ought to involve marriage and the prospect of children.

However, there was a dangling bait element in Insufficient Mating Material (my second alien romance novel in the god-Princes of Tigron series).

I'd been intrigued by Discovery Channel documentaries about candiru (a bloodthirsty little fish from the Amazon river) being attracted to urea and mistaking a man's equipment for the gills of its normal prey.

The true science inspired me to write the "a fish nibbled me" scene. Now, I don't approve of doing permanent harm to my heroes, so I might as well tell you that the teeny weeny willie fish was a plot device, dreamed up by the hero because he wanted the heroine to take a close look at his wedding tackle… He had a very good reason for that.

Djetth, hero of Insufficient Mating Material, faced a lot of challenges, including a broken jaw at the beginning of the book, and being marooned with the heroine on an island without running water or toiletries, and being hunted by a swat team of assassins. His story was immense fun to write, and although the book was categorized as a fantasy, there's a great deal of hard (well, sound) science in it.

Tarrant-Arragon led pretty much a charmed life, but he did experience an unpleasant moment, thanks to an alien version of the "Teddy Bear" cactus, which I learned about on a corporate team-building trip to Arizona. (I also discovered on that trip that I am a fantastic shot with a six-gun.)

The cactus's fruits have papery spines that are attracted to liquid, and it can kill a rabbit or any other animal by sinking deeper and deeper into the flesh. If you remove the spines and peel the cactus –which our guide did—it tastes a bit like kiwi, and is a very good source of Vitamin C. We were also told (after I'd been the group member who volunteered to sample it) that it was simultaneously a powerful aphrodisiac and laxative.

Since I cannot possibly leave you on a low note, I shall end with a scientific term for a phobia.

Keraunophobia : an abnormal fear of being struck by lightning.


I wish you all a very safe, happy, healthy, prosperous New Decade.

Posted by RowenaBCherry at 6:11 AM