Flowers as Worldbuilding: The Book Of Dreams

What's on your bedside reading table?

I seldom publish reviews, and I'm not sure that I've ever before made a list of what is in and around my bed. However, it's rather important in my little family that we each stay healthy, so we are all washing our hands and gargling with salt water a lot... and sleeping in different parts of the house. 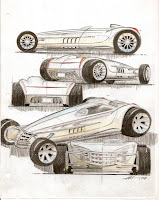 Why? My husband will be showing his hot rod, the VSR, at the Grand National in Pomona next month. Right now, we're creating his "build book" which is a glorified scrap book showing some of the best photographs from early sketches to men with small knives working on the clay model to showing the car on the carpet of the ballroom of the Ritz Carlton on Amelia Island.

I've just ordered some promo postcards from Vistaprint... my author-promo skills come in handy... and we are highly amused to see that one of the Vistaprint cards that was picked up from the SEMA stand is being auctioned on EBay.


Make of it what you will, around my bed are the following:


Black Sheep by Georgette Heyer
Flowercraft by Violet Stevenshon
Zoobooks Magazine (the Elephants issue)  The Sharks issue isn't far away.
Silk and Shadows by Mary Jo Putney
The Business of Winning by Robert Heller
Logic Problems by Penny Press (in fact, I have three of them)
Birds, from the Usborne Discover series
Tempting Fortune by Jo Beverley
Super Sudoku
The Evening News by Arthur Hailey
Explore the World of Prehistoric Life by Dougal Dixon
The Columbia Encyclopedia Vol 3
Sex - A Man's Guide from Men's Health (Rodale Press)
An Ellora's Cavemen anthology with CJ Hollenbach on the cover
Another Ellora's Cavemen anthology with Rodney Chapman on the cover
The Book of Dreams (The fifth and final Demon Princes novel) by Jack Vance

I'm reading "The Book Of Dreams". The subtitle --"The fifth and final Demon Princes novel" and also a couple of lines in the back cover copy intrigued me.

HOWARD ALAN TREESONG
gave a banquet to ten friends. All died in agony, save himself.


HOWARD ALAN TREESONG
went to his old school reunion to teach his former classmates the meaning of horror.


HOWARD ALAN TREESONG
was the most elusive of the five Demon Princes upon whom Kirth Gerson had sworn vengeance. A galaxy-wide guessing game proved his undoing.


HOWARD ALAN TREESONG
wrote his own holy book and called it The Book of Dreams.


JACK VANCE
penned the book of Revelations for that pseudo-bible and thereby brought the most suspenseful galactic manhunt series ever written to a smashing conclusion.

The back cover is a little hard on the eyes! I think it was the "Princess Bride" element (Treesong's implied immunity to poison) that appealed to me most -- apart from Demon Princes. Disappointingly, the "demon princes" don't appear to be demons, and they aren't princes, either. They're powerful intergalactic criminals. The Sopranos in outer space? I'm not averse to "suspenseful galactic manhunts", either.

It should be noted that this book was first printed in 1981. So it was before The Sopranos (first aired 1999), but Princess Bride was published in 1973.

The hero, Kirth Gerson, is revealed to be an intergalactic newspaper magnate. Not quite Clark Kent-like, Kirth Gerson lives a double life, posing for much of the time as Henry Lucas, "Special Writer" a lowly investigative reporter and op-ed writer at one of his own newsdesks.

One day, he is fumbling around among the paper files when he comes across a photograph marked "Discard". In other words, it might have been shredded if he hadn't found it. In an intergalactic world when a paparazzo could be murdered for taking a picture of the wrong supercriminal, this photograph of ten people at a banquet is a very big deal. Someone has written "Treesong is here."

Nine of them are probably dead, if one can trust back cover blurb. While the supervillain, Howard Alan Treesong, might be assumed not to be one of the two women seated at the table, Kirk Gerson's first mystery to solve is, who is whom and which is Treesong?

Being the cosmic Murdoch that he is, Kirk Gerson decides to launch a new magazine with interstellar if not intergalactic distribution, publish the photograph on the front page of the inaugural issue, and make it into a "Name the Celebrities And Win" contest.

I am enjoying Jack Vance's world building, and especially the little swipes he takes at our modern world!


"Jack Vance is one of the truly important science fiction writers of our day." --Los Angeles Times Book review

Human vegetarians, for instance, have become graceful, slender, beautiful idiots. They've evolved into deer-like creatures that forgetfully abandon their babies, so the omnivore humans pick up the babies and raise them to be domestic servants (or slaves).

I find myself stopping to wonder "What's the deal with the lists of flowers?" It bothers me. This appears to me to be a book by a man, written for men. I infer that because a colleague of the hero (who does not at this point in the story appear to be a villain) owns a vegetarian. He dresses her in a short smock and nothing else. When she bends over, we can see that she has no underwear. We are told that vegetarians bite and hiss to protect their virtue, but that groups of men get around that by offering the vegetarians molasses candy. Vegetarians cannot bite to defend themselves when their mouths are full.

"Vance's descriptive eye is sharp, and his ear for the language is close to infallible."--New York Newsday

Jack Vance doesn't list only flowers... I pick on that because so far, there have been three of them. He also lists artists, artifacts on display in shop windows, objects in rooms. It's quite effective, and reminds me of a screenplay.

In every list, Vance names several names (or items) that are familiar to all of us, and mixes in made-up names without explanation (none is necessary) to show that we're in another place and time. "Giotto and Gostwane; William Snyder and William Blake..."  "... wallflowers, pansies, native bulrastia, and St. Olaf's Toe..." Another interesting and economical use of plantlife was "green mematis" (obviously derived from clematis).

I do wonder what it is about wallflowers that do as well as they do on so many faraway future worlds. So, I looked them up. Plausible. Interesting choice. Any relative of the cruciferous family is all right with me. I'd have chosen a geranium, though. Wallflowers feed and attract all manner of insects from weevils to butterflies. Geraniums repel them.

However, the more I think about Jack Vance's world-building, the more I appreciate it. I love his casual throwaway lines about three moons, and about the religious orders who first colonised his worlds. I am definitely going to have to go back to the beginning, and read the series from the beginning.

The "Demon Princes" novels are:  (quoted from Wikipedia "Text is available under the Creative Commons Attribution-ShareAlike License;)
All the best,
Rowena Cherry
SPACE SNARK™ http://www.spacesnark.com/
Posted by RowenaBCherry at 9:18 AM