The care and feeding of your deadline slammed author 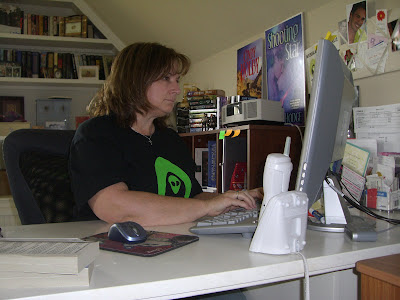 I was trying to explain to a friend the other day about deadline hell. What happens to writers when we have to slide into that dreaded place that consumes every bit of our time, imagination and energy. I realized that until you really live it, that most people do not really understand what it is. So hopefully this will explain it a bit and give you some hints on what you can do to help your favorite writer get through it.

Deadline hell is what occurs when you don’t hit your carefully planned out page count for each day that you have until your book is due. Best laid plans and all that, but quite frankly, life happens and it does get in our way. For me lately it’s been my dad’s cancer, which is now in remission, thank you. So said book that was due March 1 is now due June 1 and has to be turned in or else it will not make it to production on time for its February release. This also means that since I missed the first deadline I will not have a Cindy Holby release this year (only Colby Hodge’s Twist) andI SUCK AS A WRITER AND MY CAREER IS OVER.

Since I now have two extra months to write I can do it. Woohoo! WRONG. During April Dad is in hospital twice with complications, I am preparing for RT, I go to RT for eight days and it takes me a week to recover, catch up from RT. Two of those days were spent sleeping as I got no sleep at RT. So now its May 1, book is due June 1 and I’m about 4,000 words away from halfway. Which means I have to write around 250 pages in a month. Which is around ten pages a day if I write everyday which I won’t be able to do because life gets in the way. Can I do it? I better because if I don’t I SUCK AS A WRITER AND MY CAREER IS OVER.


So what happens then. I sit in front of my computer. I tell myself I will not play Freecell ever again for as long as I live. I play Freecell. I look at manuscript. I decide entire book is the great dedication to sucktitude. I put on writing inspired songs to get into the story. Since I am writing an angsty story I get depressed. I listen to them over and over again. I get all weepy. My bwff (best writing friend forever) tells me to quit listening to angsty songs and I reply with giant wail. “But I caaaaannnn’t. It’s the soundtrack to Atonement and I Lurve James MacAvoy and he diieeesss.” Btw dialog like this goes back and forth all day with my bwff posse. If you want to know who they are check out the dedications in my books. Finally I decide I am in right frame of mind to write.

But first I check my email. Why? Because writers are isolated. Email is our connection to our friends. What are our friends doing? Are they in writing hell too? Ohh, here’s a link to something. Maybe I should check that out. Finally I realize that I’ve wasted half a day on internet. Turn off internet and write. Go back to manuscript. Maybe it doesn’t suck. Hmmm, writing historical and I need to know what certain building on certain street looked like in eighteenth century. Sign back onto internet. Get distracted again by email, IM or something Brittany/Paris/TomKat has done. Oh, another email, someone I know has hit list/won award/got new multi comma contract and while I am happy for them it didn’t happen to me because I SUCK AS A WRITER AND MY CAREER IS OVER.

Why do writers obsess over things like that? Because we write in a vapor. Some writers have critique partners. I don’t. If the story takes a direction I’m not sure of I’ll send it out to a few of my friends for some feedback but for the most part it’s just us and the story.

So now its time to really get serious. What happens next in the story? Write write write. Hmmm, write some more. Shove kitten off desk. Try to ignore sad doggy eyes. Grab apple, yogurt, banana, hand full of chips for lunch. Grab some caffeine. Grab some more. Stay up late writing. Eyes cross, wrists aches, back and shoulders ache, butt hurts because this continues day after day after day. Husband pokes head in and asks about dinner. You look at him like he’s an idiot and wave him off. Husband carries in dinner, does laundry, vacuums, rubs back and tries to stay out of your way. (I am fortunate that my kids are grown and pretty much self sufficient and I also have an awesome husband) Week goes by, then another, then another and you realize story has come together and perhaps you aren’t the giant burrito of sucktitude (bwff term) that you once thought you were. But you are also very lonely, and you kind of look like crap since you have basically lived in front of your computer for a month. Since I am now working on my thirteenth book I’ve kind of been through this before so I know what to expect. You think that one day I would figure it out and stay out of deadline hell but I don’t because I SUCK AS A WRITER AND MY CAREER IS OVER.

So what can you, as a fan/friend of a deadline crazed writer do? I have my own little support group. I just got a text hug from one. Another is giving me rah rahs every night and I have realized how much I really appreciate it. I look forward to it. It keeps me inspired because I know these people believe in me and maybe I don’t SUCK AS A WRITER. So if you have a writer friend who is in deadline hell then drop them an email (believe me they will be checking) or a comment on their myspace page and say Yay, we believe in you and can’t wait for the next book. They will appreciate it more than you know. And it’s also great to know that you don’t really suck that you are just doing the best that you can.

Oh yeah, we procrastinate too. Why else would I be spending my time writing this instead of working on my story?
Posted by Cindy Holby at 7:55 PM