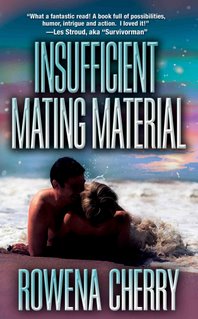 I was toying with the idea of building on Linnea's and Jacqueline's previous posts about genre, with particular emphasis on comedy in science fiction romance, because some people seem to think I'm funny.

And, if comedy could be one of the selling points for my new novel INSUFFICIENT MATING MATERIAL which comes to bookstores everywhere on Tuesday (January 30th) then I ought to take advantage.

However... the iguana-with-an-erection story is topical, and it's good to be topical, even if one is an author of futuristic romances.

I just cannot leave a good double penis story alone. (I was sorely tempted to omit a noun from that last sentence for the sake of sensationalism.)

Did you see the Reuters article about the iguana named Mozart who has sported an erection for almost a week? Concerned vets have decided to put a stop to the unruly erection by amputating.

"The good news for Mozart and his mates is that
male iguanas have two penises.

Mozart, sitting on the shoulders of his keeper as camera crews
focused on his red, swollen erection, seemed unperturbed..."


Is red and swollen a problem?
I confess my ignorance. I have no idea what color a healthy, happy iguana's penis ought to be.

I really hope the vets aren't being hasty.

Who is this erection bothering most? Reportedly, the male iguana doesn't seem concerned.

As for what use I can make of news like this... well, here's how one speculative romance writer speculates.

I ask myself:
What do I know about double penises?

I know that Barbara Karmazin wrote a wonderful book, The Huntress, and the hero had one.

I know that one fabulous theory about dragons is that they squirted fire by having two nozzles at the front of their mouths --like doubling up a snake's snorkel-- that sprayed different liquids. The liquids became combustible when combined.

I know that there are super glues, drain cleaners, and other household products --I think there is a beauty product, too-- that comes in a double barrelled container, so the substances only combine when squirted onto or into whatever they are designed to be squirted onto or into.

I wonder why an iguana has two penises.
One to use and one to rest?
A spare?
One for fun and one to get the job done?
Do they work like the cannons in Star Wars? Like pistons? One recoils while the other fires?

What if the iguana has super-glue semen? (In that there's different stuff in each barrel, and it's only effective if both barrels are discharged.)

And finally, after I've amused myself sufficiently, I ask myself:

Will my editor buy a LoveSpell Romance hero with this level of complicated, high-tech equipment.

As Clint Eastwood's Dirty Harry used to say, "A man has to know his limitations."

So does a writer.

PS. In conjunction with the launch of INSUFFICIENT MATING MATERIAL, I am running a HIDDEN IMAGE contest from January 31st until February 28th 2007.

One entrant will win a $500 bookstore buying-spree. Details, entry form, rules can be found at www.rowenacherry.com/hiddenimage/
Posted by Rowena Cherry at 9:21 AM