Karen S. Wiesner: SURPRISES IN THE COURSE OF LEARNING TO WRITE A SCIENCE FICTION SERIES (2 of 15)

Of the Overarching Series and Its Connection to Speculative Fiction

This is the second of fifteen posts dealing with surprising things I learned in the course of writing a science fiction series. 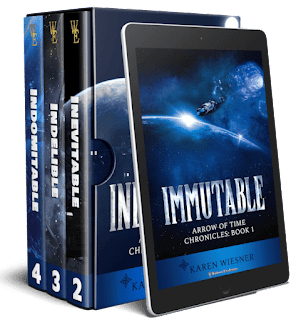 No simple solutions, no easy answers, and nothing is ever free…

In last week's post, we talked about why science fiction, especially those in a series, is debatably the most difficult genre to write in. Another reason this type of series is so complicated is because it's part of a rare breed of series that I'm calling the Overarching Series that requires complex and multifaceted character- and world-building as well as necessitating series arc sequel hook endings in all but the final installment. Overarching Series dominate speculative fiction more so than any other category of fiction, though it is possible for one to be in other genres as well.

In the Overarching type of series, none of the books can truly be standalones because the series arc that's introduced in the first book in the series will run through every installment in that series, expanding and intensifying as it goes, only concluding in the final volume of the series. In other words, it's unlikely that the individual titles of the series (except perhaps the first) can be fully understood without the others in that series. Nearly always, they need to be read as a set, in the proper order, to make sense. However, that doesn't necessarily mean that you can't enjoy the stories separately. You'll just miss a lot doing so and ultimately you might end up with a fair amount of confusion.

To be clear about this, a cliffhanger ending is most always referring to when a book ends in the middle of an unbearably intense or emotional bit of danger. Instead of concluding at the place where the scene would reach a natural end, the action is truncated prematurely, leaving the reader hanging when it comes to resolution. Readers have no way of knowing what actually happened unless or until a sequel to address this dangling thread is released and addresses the previous situation satisfactorily (and sometimes the explanation for how the danger was actually averted can be less than gratifying). Frequently, readers consider employing this technique as outright cheating because they've been purposely deprived of the unspoken promise of a proper resolution.

Kind of a downgraded definition of a cliffhanger ending is any thread left dangling. In the case of series arc thread, writers generally provide story arc resolutions within the individual volumes of the series while holding off on resolving series arcs until the final volume. For the purposes of my upcoming writing manual, Writing the Overarching Series, I'm calling these not-quite-a-cliffhanger endings "series arc sequel hooks". While readers maybe shout "But what happened to--?!" upon reaching the end of any series installment, the place each particular volume ends should feel natural and not an affront or trickery employed to avoid genuine resolution.

The story arcs that are specific to individual titles in an Overarching Series will resolve within their particular book, providing the necessary satisfaction when completing the story, while the series arc almost always produces a less upsetting form of cliffhanger ending called series arc sequel hooks in all volumes other than the final book of that kind of series, where it's finally resolved. The reason for that may be obvious but I'll state it anyway: The series arc can't be resolved until the last book of the series. While authors do need to find a natural, logical place to leave the series arc from one volume to the next so the "to be continued" aspect won't infuriate readers so much as build anticipation for what's to come, keep in mind that each volume needs to be assigned its own piece of the series arc to tell in an Overarching Series. Some well-known Overarching Series book series, TV series, and movies are The Lord of the Rings, Divergent Series, Harry Potter Series, Twilight Series, Supernatural, Grimm, and Star Wars.

Perhaps the most defining factor of an Overarching Series is that the individual volumes could easily and maybe even should be ideally packaged as a single work if cost and reader acceptability weren't factors.

You might have noticed something very specific about all the Overarching Series titles I mentioned above: They could all be included under the Speculative Fiction umbrella. Speculative fiction is particularly well-suited to the Overarching Series structure. While it's certainly not out of the realm of possibility that an Overarching Series could fit in other genres of fiction, they do crop up most often in speculative fiction. All the techniques and strategies I employed in the process of completing my Arrow of Time Chronicles are actually ones that could work just as well for any fiction genre as well as for any type of series.

Let's talk more about the speculative fiction before we get into why these particular genres work so well for an Overarching Series.

There are a lot of different definitions for speculative fiction (or "spec fic" as it's sometimes called). Basically, the definition I'm using here is the one that's most likely to come up if you put the words "speculative fiction" into any search engine: "A genre of fiction that encompasses works in which the setting is other than the real world, involving supernatural, futuristic, or other imagined elements." The spec fic umbrella would cover (but isn't limited to) science fiction, fantasy, superhero fiction, science fantasy, horror, utopian and dystopian fiction, supernatural and futuristic or any combination of these along with other potential offshoots too numerous to mention. The point is, spec fic almost always has enormous requirements when it comes to:

1) World building. You might need to come up with a variety of environments either all in one location, like a planet, or sprawled across great distances--maybe an entire universe--that you have to figure out how to traverse. Most if not all of these locations have to be unique and complex enough to be believable while still retaining some semblance of realism capable of luring current readers.

2) Character building. In these genres, not all your characters will be human. In fact, a good portion might be from an alien culture or some kind of supernatural creatures that the author has to construct from the ground up. You're not just describing and personalizing living and breathing, sentient beings. You're figuring out who and what they are, where they came from (their history, present day situation, and the future are yours to formulate!). You'll be required to explain how their family life, culture, government, religions, monetary systems, and countless other structures work in their very individual worlds.

Next week we'll talk about my very first big surprise in writing a science fiction series. 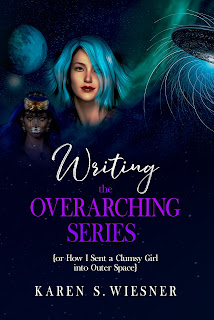 Based on Writing the Overarching Series (or How I Sent a Clumsy Girl into Outer Space): 3D Fiction Fundamentals Collection: by Karen S. Wiesner (release date TBA)

Posted by Karen Wiesner at 8:21 AM