As you've noticed, I've been reviewing books set in series, many times starting later in a series than Book 1.

With some series (like my own Sime~Gen, for example) it doesn't matter where in the sequence of published books you start.  For others, like the Foreigner Series by C. J. Cherryh, it does make a difference, but sometimes not too much difference.

Cherryh has been telling one, long, continuous story of a single human's life-experience.

This tight focus on the personal and professional issues and advancing problems, each more complex and difficult, dangerous and with higher stakes than the last, gives the feeling of being swept along in a single "novel."

There is an envelope plot, and an ever widening view of the main character's universe.

It also deals with the way an adult human might be "assimilated" into a non-human culture.

For example, when Bren Cameron (the Hero of this series), visits his hometown of his home human culture, he is considered to have somehow acquired an emotionless, unsmiling, un-frowning, inscrutable facial expression.  He, himself has to consciously remind himself to let his feelings show on his face, as part of speaking his native language.

That was in the book immediately previous to RESURGENCE. 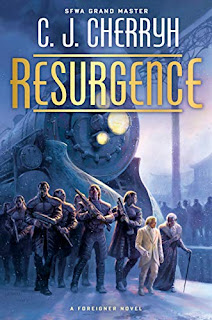 Now, in Resurgence (Book 20 in the series), Bren Cameron is back among the non-humans (where he feels more confident, grounded, oriented) and something has changed.

Previously, Cherryh pretty much left facial expressions out of communication with the Atevi, the non-humans, but in this book all of a sudden, Atevi emote with facial expressions and are utterly transparent to Bren's eye.  They see and interpret him, and he sees and interprets them (we don't know what inaccuracies might be embedded in these non-verbal transactions yet).

If Resurgence is your first book about Bren Cameron and the Atevi, you won't notice this shift at all.  It's a perfectly readable book, and just as with any stand-alone novel, the characters have a past that affects their present and a future that goes on beyond the end of the book.

That "happily ever after" ending we all love is a future that goes beyond the end of the book.  It gives the reader a sense that it isn't over.

C. J. Cherryh has structured this series as a series of trilogies.  There is a series envelope plot - Bren Cameron's life story and the historical importance his departure from tradition (and even the law governing his people and his appointed office).  And then each trilogy advances that series plot one step, while filling in a detailed tapestry of the background, making commentary on human nature, and expanding knowledge of the galaxy.

Resurgence is the middle book of such a trilogy, and as such really doesn't seem like a great place to start reading the series.  It starts right after the end of the previous book, with Bren on a boat arriving at the Atevi port near his residence on the Atevi side of the strait -- the other side being the island ceded to humans.

In the previous book, he left the human port on this boat.

So this is a continuous story -- and now we find out many things that Bren missed while he was away. The other viewpoint character is the young prince who is being groomed by his father to be the ruler of the Atevi.  He has matured since we last followed him.  In this volume, he deliberately refrains from messing up the affairs of his father, Bren, his mother, uncle, great-grandmother, etc who are busy rescuing the world from the brink of disaster.

But this youngster also has human youngsters for dear friends, and is plotting to have them over as guests at Bren's house (which has its own boat dock).

There is no overt Romance in this series, though the larger fate of civilizations is shaped by human/human and human/non-human Relationship.

The romance writer should study series like this to work up a comparable universe where Romance is explored, explained, utilized (maybe weaponized), exploited, analyzed, disproven, and proven.

This is the kind of series, with rich and detailed background, that could become the blockbuster production that explains to those who don't believe in the Happily Ever After, where they have made their cognitive error, and why it's worth their while to correct that mistaken belief.

Previous discussions of C. J. Cherryh include 12 posts on this blog. Here are a few of those.

I have the next book, Foreigner Book 21, DIVERGENCE on Kindle order for Sept. 2020.
https://www.amazon.com/Divergence-Foreigner-Book-21-Cherryh-ebook/dp/B084M68XBB/