Here we are now in 2020, and just at the end of 2019, the 15th volume of my Sime~Gen Series appeared on Amazon, Apple iBooks, and probably places I've never heard of.  It is in e-book and paper formats.

We have talked about Star Trek, and the impact a mere TV Show has had on the world.  Teens and college students were (and still are) inspired to create the devices and capabilities Gene Roddenberry built deep into the background of Star Trek.

And those tantalizing possibilities still lure young people into the sciences.  New Series set in the Star Trek Universe are now Streaming hits.

How did that happen? Why? Could someone do this on purpose?

is all about why young people were so inspired, driven to develop skills to manifest their creativity.

To demonstrate the validity of my theory, I wrote my first novel, HOUSE OF ZEOR,  https://www.amazon.com/House-Zeor-Sime-Gen-Book-Sime-Gen-ebook/dp/B004N3AZJG/ 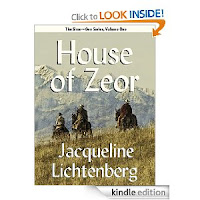 ...to appeal to the Spock fans among Star Trek fans.  I sold the (at that time very expensive) hardcover with a money back guarantee - if you don't like it, mail it back to me and I'll refund your money.  I sold 60, and never had one returned.

The first novel in the series drew heaps of fan mail with questions about the worldbuilding.  I answered by letter -- and the created the fanzine Ambrov Zeor to publish my answers as I kept getting the same ones over and over.

STAR TREK LIVES! blew the lid on Star Trek fan fiction.  For years, fans had been publishing their own original fiction (with original characters not seen on screen), in fanzines.  That explosion of creative fiction was replicated by HOUSE OF ZEOR and subsequent Sime~Gen Novels.

As soon as I established Ambrov Zeor as a fanzine, I began to get fiction submissions even from people I didn't know.  I handed editorship of the fanzine over to a fan so I could go on writing books.

At a Star Trek Convention, Karen MacCloud and Katie Filipowicz (two I didn't know at the time, since become best friends for life), approached me to ask to found other Sime~Gen fanzines.  They did exactly that and never had too few submissions of fiction and articles to get an issue out for another Star Trek con.

By the time the second Sime~Gen novel was in hardcover print from Doubleday, one fan who was already a professional writer, Jean Lorrah, had written for the Sime~Gen fanzines just as she had written Star Trek fanfic.  Then she submitted to me a novel about the first channel to discover how to channel selyn.  We sold her novel to Doubleday and went on to do more Sime~Gen together -- then she wrote independently in Sime~Gen and I went on to develop the story line.

So just like Star Trek, Sime~Gen captured reader interest and jolted creativity into motion. At one point there were 5 Sime~Gen fanzines - replicating the phenomenon in microcosm.

Star Trek, meanwhile, went on to generate Animated TV Series, and then new Prime Time drama series (most of which we love).

Years later, Sime~Gen fanfic writers, some of whom had meanwhile become professional writers, made new, original, contributions to main-line Sime~Gen, first with a professionally published anthology 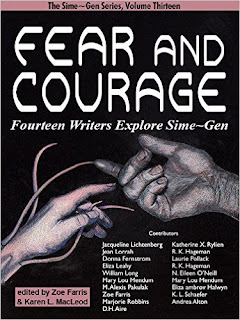 .. and now Mary Lou Mendum has transformed some of her Sime~Gen fanfic into professionally published novels, the Clear Springs Chronicles - a series within a series.

Her second Clear Springs novel is now out, and she's well into drafting the 4rd.

Plot and story lines had to be added to blend the fanfic onto the timeline, and she has been tasked with inventing some scientific advancements that change the direction of Sime~Gen history.

In the Clear Springs Chronicles, we follow the spread of Sime Centers deeply into Gen Territory.  As the interface between Sime and Gen deepens, creativity sparked and NEW science emerges.

Mary Lou is a Ph.D. in plant genetics, so we tasked her with identifying the plant source of a staple drink, adding to the Worldbuilding both a new kind of organic battery, inventing heavier than air flight, and a new disease.

Jean Lorrah is working on more novels covering the industrial spread of the organic battery via the Entertainment Industry -- and in the process, incorporating Mary Lou's new disease, showing how the death of one person from this disease motivates a descendant to transform the world yet again.

These fans are working, and re-working, the Worldbuilding behind the novels I have written.

It is up to readers to decide what there is about Sime~Gen that seems to echo the effect on fans that Star Trek has had.

Mary Lou first drafted these new novels, then I made changes, Mary Lou re-drafted, and Jean Lorrah did a final polish edit -- then I did a polish draft, and Karen MacCleod did a copyedit, then it was sent in to the publisher, and we got back the usual final-final-final check this again, draft. 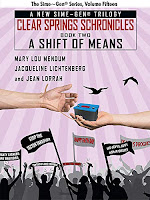 You can find it on iBooks by searching Sime~Gen.


Books 16, 17 and 18 are in the works, detailing the way human personalities blend and clash to produce the structure of science and technology which transforms humanity's lifestyles around the globe, and eventually into space.