Reviews 51 - Shield of the People, a novel of the Maradaine Elite by Marshall Ryan Maresca

This is the second in the Maradaine sub-series, Maradaine Elite. 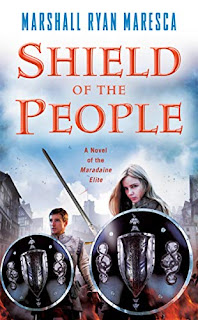 The first was The Way of the Shield. 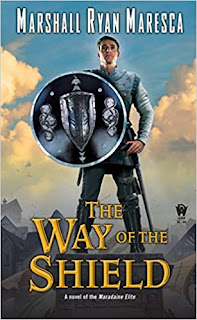 The set of Maradaine series (there are several already) from DAW FANTASY have become some of my favorite reading matter.  Each series focuses on a different level of society - the constabulary, the university students and faculty, the business people, the criminals, the territorial gangs who "run" their sections of town.

If the plots had more outright Romance, it would be even better, but it has relationship driven plots, family issues, and plenty of budding love stories.

Even with the author walking right by grand Romances as if blind to them, these novels are just fascinating.

They are Fantasy, in that Magic and Magic Technology are featured as part of the worldbuilding.  The Characters take this dimension of human power for granted -- it isn't remarkable, but just another element of the world that causes complications.  But science also works, and may be in hot pursuit of the mechanism behind Magic.

I'd say the Maradaine novels are Sociological Fantasy.  The world where Maradaine exists is a well built fantasy world, but the Characters are all embroiled in the push-shove jockeying for place, power, position, titles, authority, to function within the order of their society.

The Maradaine Elite title might refer to many things within the novel. There is a Cabal of landed, titled, rich and influential people called The Ten, who consider themselves Elite.  There is an Order of Martial Artists with aspirational idealism who are Elite fighters.  And there's a Political Elite who think highly of themselves.

Structurally, this novel is a thematic work of art, which could be why I like it so much.

It is about the pre-industrial society's method of counting ballots in a free democratic election.  The ballots are pieces of paper, and though counted in the out-lying cities where they were cast, they are put in lockboxes and transported by horse-drawn wagons over difficult mountain passes, to be officially certified in Maradaine, the capital.

Why this process is not accomplished Magically is not explained in this novel.

The Main Characters involved in rescuing the ballot lockboxes from those who would overthrow the will of the people belong to the martial order, priding itself on being a Shield of the People, never an aggressor, but are only trainees.

So the ostensible plot is focused on keeping an election from being falsified, but seething underneath that action-story is the conspiracy plot left from the previous Maradaine Elite novel.

Complex but very realistic political factions take shape, with no explanation of why these people (who are apparently human, but that is not established either) think exactly as the people of Earth in the 1700's.

There is no explanation of why Magic has not been harassed to create an industrial revolution.

In other words, these novels of various segments of the population of Maradaine, are hugely inspirational to the Romance Writer with a science fictional bent. Everything that is in the Maradaine novels is just fine -- it's what's MISSING that inspires.