Reviews posts have not been indexed.

The previous book by Sara Hanover, The Late Great Wizard,

was discussed related to Soul Mates in this post:

Now we will look at the second book in the Wayward Mages series, The New Improved Sorceress. 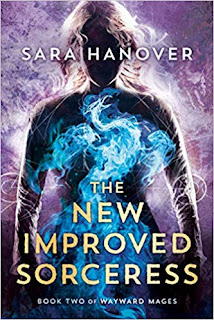 2020 as a year will be one replete with headlines to be sliced, diced analyzed, and re-purposed for your own worldbuilding.

The themes, the drumbeat of civilization, is shifting tempo.  New styles and new artistic statements will be emerging -- well, not "new" new ones, just the very oldest from pre-history onward, repeating in an ever progressing spiral.

Finding the deepest, most invisible issues readers are wrestling with sends authors to the top of the charts.

Sarah Hanover has amalgamated the themes and symbols that have electrified readers for about ten years now.  Hanover might be finishing off the discussion of these topics using these symbols -- Phoenix rebirth in fire, ordinary girl thrust into world of magic, magical politics (various mythical creatures organized and opposing each other, trying to stay unnoticed by our world), and many other symbols.

Hanover's new series, Wayward Mages, is Urban Fantasy illustrating the secret world under/beside our "real" world.  Because the readership for this kind of World has "read it all before,"  she has created a number of characters just being introduced to the magic side of the world who shrug and accept it.

This late in the cycle of Harry Potter Urban Fantasy, the Characters have to behave this way so the story can just get on with it.  Readers of this genre are no longer fighting their way into believing there is more to reality than they see.  So the Characters don't fight that battle, and just get on with conquering Evil and saving the world.

This is a series you should pick up and follow because it may be one of the last of its kind.

You could identify with any of these "people."

And they do intermarry among themselves (which causes trouble) and with humans (more trouble).

You can now see a budding Romance between the main Character, Tessa, possessed by a magical object that has embedded itself in her hand, and the Professor (a Phoenix in process of regenerating).  But something sizzles between Tessa and the local, magic-user Cop.  It is definitely the plot-driving Relationship of the series, so far.

As more books come out, we might find the overall theme is, "What exactly makes Souls Mate?"