Previous parts in this advanced series are indexed at:

When writing science fiction romance, you are telling a story that develops differently from the stories the reader has seen unfolding among their real life acquaintances.

Art is a selective recreation of reality, not reality itself.  In reality itself, many things vary at once, and nothing stays the same for long.

Science is an art form, and as such is SELECTIVE in focus.

Humans do this selective narrowing of focus in art and in architecture, mechanics, agriculture, everything we do, because our minds can't handle too many variables at once.  Even multitasking is done by cycling the selective focus rapidly between processes.

So we do this kind of narrowing in both story-reading and story-writing.

The writer "establishes" or nails down each variable at a time, usually on page 1, or at least in chapter 1, until only one thing is left to change under the impact of conflict-resolution processes.

For example, in writing a Historical -- the "setting" is nailed down as one of the first variables.  -- it is THE PAST.  How far past, what year, what era, are indicated by the details mentioned as the conflict is established.

In films, the automobiles (or carriages) by year-model or style will tell the viewer where and when this story is happening.

The writer decides WHEN and WHERE to set the story according to the THEME, and what the writer has to say about that theme.

We've discussed theme from many angles.  Here is one of the series featuring theme:

The theme is very often the solution or resolution of the conflict which generates the plot.

Once you have the theme, you can find the point in history where your theme is the resolution of a social or cultural conflict larger than the Characters you are writing about.

From that point, you have a clear path into the Plot, which is the series of events triggered by the actions or decisions of the Main Character.

If you're using real history, you already have your world built for you, but if you're doing science fiction or fantasy, or Paranormal Romance, you have to take the real world that was, and vary ONE ELEMENT to generate your alternate history.

For a very long series, you can pinpoint a different variable for each volume, so you can point out a long list of ways your pre-history varies from your reader's -- and thus how your alternate universe would lead to a different present the your reader lives in.

The trick to getting readers to suspend disbelief and go with you into your alternate-past is verisimilitude.

Even those who live in a mono-cultural world are aware of cultural norms, and the older readers are aware of how norms change, while younger readers see changed norms as "reality" and the world their elders live in as "fantasy."

One of the inescapable realities these days is the increasing speed with which our culture is changing.

One change ignored by many Historical Romance writers  has to do with the implications of the embedded sexism of just 50 or 60 years ago.  Such a few decades seems like ancient history to the modern Romance reader, but to some of the older people the reader works with, 50 years ago is the present.

We see that on the political stage as older people running for office casually, without thinking about it, put their hands on other people.  We see it in offices where older people in decision making positions simply assume the privileges of those who preceded them.

Current young people assume (as the young always have) that their cultural values and behaviors are correct and morally superior to those of older (say, 70-somethings) people.

THEME: my culture is superior to yours, or to all cultures.

THEME: Women who let men get away with it are contemptible

THEME: Women who refuse to let men get away with it are contemptible

Think about that.  Which era in human history -- or future history -- would you choose to showcase each of those themes.

PLOT: A woman fights cultural norms and wins her freedom (Joan of Arc)

PLOT: A woman understands her place in a man's world, and prevails anyway, without confrontation

PLOT: A woman raises daughters to champion the cause of women (owning property, voting, holding a job with equal pay, not-having children).

PLOT: A woman refuses to obey men and dies a martyr

CHARACTER: A man learns his home is his woman's castle

CHARACTER: A man proves women are not capable of a man's work

CHARACTER: A woman refuses to let a man get away with excluding her

All of these conflict lines raise the cultural questions related to THEME.

If you choose a setting of the 1960's going all the way back to Roman Empire Times, you have to deal with the realities of how woman raised in that culture reacted to being told "women can't do that."  And contrary to modern Romance novels, women back then who made an overt issue of the "man's world exclusion principle," didn't succeed.

How many actually did that might be calculated from the election results records.  Most did, I suspect.

Why?  Why would a woman not exercise independent judgement?

One answer would be that women are human, and had been raised in the same culture as the men.

A respectable character with self-respect, a character the reader wants to identify with, will not knuckle under.

How could you explain the emotional reaction of a woman with all the requisite scientific credentials to apply for a particular job getting the following letter in response to her application?

This is a real letter sent to a real woman who was well qualified for the job she had applied for, and who was living far away at the time and couldn't go in for an interview.  If she had, she would have been treated politely, as politely as this letter is phrased.  At that time, this letter was POLITE, and proper, and not in any way discriminatory or offensive or illegal. 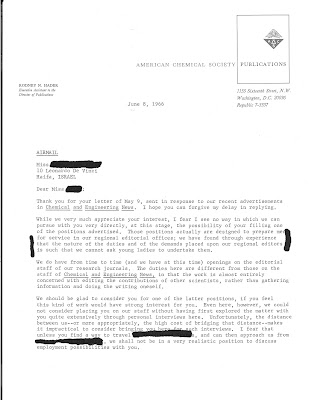 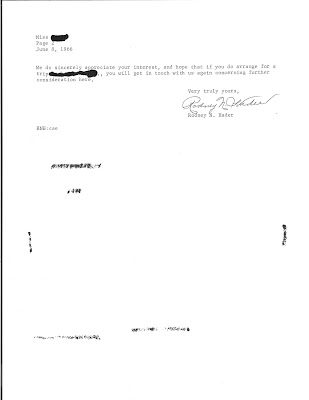 If that image is hard to see, here is a transcript of part of it.

While we very much appreciate your interest, I fear I see no way in which we can pursue with you very directly, at this stage, the possibility of your filling one of the positions advertised. Those positions actually are designed to prepare me for service in our regional editorial offices; we have found through experience that the nature of the duties and of the demands placed upon our regional editors is such that we cannot ask young ladies to undertake them.

We do have from time to time (and we have at this time) openings on the editorial staff of our research journals . The duties here are different from those on the staff of Chemical and Engineering News in that the work is almost entirely concerned with editing the contributions of other scientists, rather than gathering information and doing the writing oneself.

We should be glad to consider you for one of the latter positions, if you feel this kind of work would have strong interest for you, Even here, however, we could not consider placing you on our staff without having first explored the matter with you quite extensively through personal interviews here, Unfortunately, the distance between us--or more appropriately, the high cost of bridging that distance—makes it impractical to consider bringing interviewees. I fear that unless you find a way to travel and can then approach us from we shall not be in a very realistic position to discuss employment possibilities with you,

Your job as a Romance writer is to create a Character who would not be disturbed or offended by that letter, and would not see it as a symptom of something wrong with the world that she has to fix.  Make the reader understand the inner world of that woman, walk a mile in her moccasins, and be comfortable in a world where gender is destiny.  If you can do that, you are a science fiction writer.  An Alien Romance would be no challenge to your skills.

Build your historical world, your theme, and your character's inner self-image so that, presented with this rejection letter, she believes that only men can do that work, and goes looking for other kinds of work.

Not, "I can do it but you won't let me," which is a child's response, but "I might be able to do it but I'd be miserable at it."  And she takes herself off to do something she will be good at, and happy doing.

This would be a female character who has no chip on her shoulder and is fully mature.  Her story is about how she triumphs by following a different path than she had expected to.

Or if you're playing with alternate universes, you can use two versions of this same woman, and show how, if she'd gotten the job, the whole world would be changed one way (say, she'd spark the invention of Artificial Intelligence), while if she didn't get the job, the world would be changed in another way (say, she raises a son who turns into the Bill Gates of that world).

THEME: the significance of a woman's life is measured only by the achievements of her son

Build a world where that truth is joyfully embraced by all women, who do not see that part of their world as in need of change.  Those women are busy instigating some other change.  What is that other change?