Reviews have not been indexed yet, but I talk about many books within the general writing craft discussions, examples of good (and not so good) techniques.

Technique is also genre-specific, so now let's look at some excellent books, series that are examples of a very focused, disciplined technique.

I've discussed Taylor Anderson's Destroyermen Series many times so some of you have thought about this one before.  Destroyermen has a couple of love stories, an awareness of why men fight wars.  The theme is that men fight wars to protect family, to establish safe places to raise children -- but in Taylor Anderson's Alternate Universe planet-earth-with-odd-aliens (some not human; some humans from other time-lines), the women fight, too. 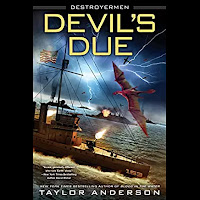 The Destroyermen of the series title are from something closely resembling the reader's Earth, WWII, South Pacific Theater.  Nevertheless, without serious objection, without sexual harassment, these Destroy Crewmen and Officers, simply accept women as combatants.

The focus love-story is between a head Nurse, a woman with grit and determination not cultivated by our WWII era culture, and an officer. 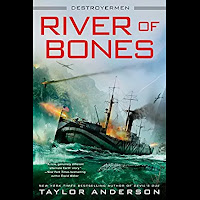 she's still pregnant, and aboard ships of war being in active combat.  The situation could happen only in an alternate universe.

Very few words in Devil's Due (Book 12), and in River of Bones,  are devoted to the love relationship that created the pregnancy.  All the Characters the point-of-view shifts among (and there are many) are wholly focused on fighting to exterminate an Enemy.

The Enemy (not human) starts out as having the mentality of vermin, or children, and fighting in shapeless swarms without strategy.  At first, in the series, it makes perfect sense to fight to exterminate vermin that are biologically wired to murder all other creatures (and eat them, even humans).

The point of view shifting is not tracking the story of how people feel about each other, or how their feelings direct their decision-making.  The point of view shifts to give the reader information about the strategy and tactics of allied and opposed forces in a huge war conducted in several theaters at once, all interlinked with politics related to the various planetary origins of the factions.

It is a very complex tapestry, very closely resembling the kind of story-canvas you find in Interstellar or Galactic War novels, as well as in horse-and-sword Fantasy Novels about who will be King (and who won't).

The war In River of Bones progresses as alliances shift, and the vermin exhibit the ability to learn after making an alliance with some Japanese from WWII Earth.  The vermin raise a generation of soldiers that is able to fight in formation, hold a line, and change plans on the fly as well as invent, copy or perfect or adapt new weapons.

The humans begin to realize this shift among the vermin, understanding the Enemy as people, and begin to win over some of them as allies.  The humans from our WWII South Pacific have not yet hatched the idea that the war can be settled without exterminating an entire species.  They are too busy trying to survive to think philosophically.

All of this happens in the context of an entire Earth globe divided into geographic factions pitted against each other.  By the novels, Devil's Due and River of Bones, the series begins to look like a Star Trek episode where humans are being tested by Aliens deliberately collecting specimens and prodding them into fighting each other.  The "real enemy" has not yet made an appearance.

It is a perfect example of marketing to a very narrow, very specific, readership, specifying exactly what the Destroyermen Series delivers -- and it is not Romance, or Happily Ever After.  It is grim defiance in the face of overwhelming odds, pockmarked with moments of triumph, and graphic moments of bloody battlefields littered with corpses.

It is fantasy in that the various factions, some not human, adopt USA-American values without resistance, examination, or thought.  Once shown a value in operation, they ALL admire it and emulate it -- or reject it and become The Enemy.

It is science fiction in that given a world with almost no technology, these Destroyermen spark an entire industrial revolution using the everyday know-how of enlisted crew.  The aliens they show technology to have among them enough geniuses to take everything up several decades and keep innovating.

Of course, since it is a war, the applications of technology are all to guns and ways to deliver explosions at a distance (aircraft, missiles, depth charges).

Just as in the Star Trek episode about the Gorn, they make everything for modern industry out of resources just discovered and easily available.

None of that background makes any more sense than Love At First Sight, and Irresistible Hunk leading to Happily Ever After does to the readership this series is aimed at.

This "makes sense" issue is what we've discussed in such detail in so many posts here.  What makes sense to one group of readers is nonsense to another --- as a writer, you need a theory (or just a thesis) about why one group understands and another does not.

To puzzle out what you think, read the Destroyermen Series - or part of it, and a lot of the reviews posted on Amazon and blogs.  The audience that devours these novels rejects Romance genre.  Figure out why, write Romance FOR this readership.

Next time we'll look at Private Eye Mystery series where it seems more progress has been made.