Putting Violence In Its Place Part 2 - The Three Second Rule

Putting Violence In Its Place
Part 2
The Three Second Rule

The First Part of this series was written as a stand-alone post, not the kickoff of a series, but in 5 years or so, the Romance Genre field has changed -- a lot.  We need to revisit this topic in light of the #MeToo hashtag campaign.

So Part One is:
http://aliendjinnromances.blogspot.com/2013/03/putting-violence-in-its-place.html

Violence has never mixed well with Romance.  Violence is Astrologically symbolized by Mars and Pluto.  Romance is a phenomenon of Neptune.

Yet today's society is surfacing the subtext interaction between men and women in the workplace, where status and power are used to bully women into submitting to sexual advances that are not welcome.  And, bullying-back, women who did accept in the heat of the moment later claim to have been attacked #MeToo.

This new front of the war between the sexes was predicted in the political explosion of the 1950's (post WWII men coming home) and 1960's (a new generation of women wanting control of their own lives, reproductive and economic destiny).

Women should not "work" because a) it distracts men from their work, b) women should be home having and raising kids, c) women are too weak to "take the heat" in the "kitchen" of the all-male workplace d) men will then make half as much salary because "now" men are paid to "support a family" and their wives are considered "employed" by the husband's employer to see to his readiness to put in a hard day's work without coming home to chaos and household chores.  (honest, that was the argument!)

Solution: make it 50/50 workplace, with the rules of employment accommodating the working mother.  A couple of generations of women have fought for that equality, and hit the "glass ceiling," hard. Now splintered shards of that glass ceiling are falling on the women climbing behind those who first broke it.  And those splintered shards are drawing life-blood (#MeToo).

So the "rules" (social norms invented by each generation of teens, just as they invent language anew, feeling their experience of life is unique and never-before-experienced by any human) of dating, hooking up, living together without marriage, have been changed.  Sex not before the third date is no longer a rule for convincing a guy you are not promiscuous.  Now, sex on the first date is an option.

When women were kept at home, sex before marriage would besmirch a reputation.  Now, put out or shut up, is the rule.  Here is a UK Cosmopolitan article about the THREE SECOND RULE.  The end of the article is the most pertinent part.

So I asked Rick, “What if your date isn’t into it? Surely no means no, not go into Carol Vorderman mode and set the timer. "Well if they aren’t, you stop right away, no bones about it. But I find most of the women are. It makes them feel gorgeous if you show you can't hold yourself back because they’re so sexy."

I must admit, Rick’s justification also made me see him in a different light. The problem is that a lot of guys believe in the three second rule - it's not just the creeps, but people like Rick who seem perfectly nice, decent guys, the other 23 hours, 59 minutes and 57 seconds of the day. But, for those three seconds, they believe it’s acceptable to blur the lines.

Essentially, the three second rule is not about waiting for a woman to say yes, but waiting for her to say no - and that's where it becomes a grey area in terms of consent. If you haven’t had a chance to say no because a guy has stuck his tongue down your throat before you can get a word in edgeways, does that really constitute consent?

"IT'S A HORRIBLE REFLECTION OF THE UNDERSTANDING PEOPLE HAVE ABOUT CONSENT"


Is "three seconds" enough TIME for a woman to "consent" -- and is that consent irreversible?  Is crying "MeToo" a week or month later somehow dishonest or dishonorable?

Is the Three Second Rule a product of the War Between The Sexes brought into the workplace where, in a Man's World, the workplace is an arena of combat, survival of the fittest, and raw life-or-death competition where women are not welcome?

Does a sexual advance from a co-worker, subordinate or superior, constitute sexual harassment - before or after 3 seconds?

Is personal body-contact an act of sexual violence?  Or is it romantic?

Do guys have a "right" to claim a woman consented because they use aggressive strength to penetrate defenses? 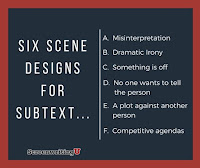 What is the statute of limitations on #MeToo?  Should there be one, or is sexual aggression like murder, killing off something that can never be replaced, repaired, or healed?

Many very ROMANTIC scenes can be constructed around these questions -- where social "rules" come from (fevered teen imagination?), why they should be obeyed, and when they should be out-grown or modified?


Discussions between Male and Female Lead Characters in a Romance just can not be plausible if conducted in "On The Nose" dialogue -- where you say what you mean.

The discussions about the Three Second Rule and #MeToo have to be "off the nose" -- which means in SUBTEXT, behind the words that are said is a meaning the reader gleans without being told.  It is all implied, alluded to, and embedded in the context of the relationship's shared experiences.

TV drama does this off-the-nose dialogue by alluding to - say - a City where the two shared an experience before the Show (e.g. "I won't forget Paris.")

In a novel, or series of novels, you have to write "Paris" -- planting it, foreshadowing the allusion that will hammer the point about #MeToo and the Three Second Rule, so the reader reinterprets the events in Paris to understand whatever thematic point you are making about #MeToo.

The hole in the "rules" that our current society has to fill in is all about HOW a guy proves he was welcomed, not shunned.  What is proof?  It used to be a wedding ring and the publicly stated, "I do."  What is proof of welcome now?  Women can accuse, but how can Men refute?

Email ThisBlogThis!Share to TwitterShare to FacebookShare to Pinterest
Labels: #MeToo, Ripped From The Headlines, Tuesday, Violence, violence on TV