Believing in Happily Ever After Part 8, The Writer's Optimistic Voice


Index to the Happily Ever After series is:
https://aliendjinnromances.blogspot.com/2016/11/index-to-believing-in-happily-ever-after.html

Doomsayers, and "end of the world" or "end of the world as we know it" people rely on stirring up fears of an uncertain future.  This awakens and energizes an intrinsic (and healthy) part of human nature.  It grabs human attention because this is the paramount survival mechanism -- fear-fight-flight.

So doomsaying has become the most lucrative business model in human history -- maybe.  Maybe in pre-history, too.  I do know many fortunes have been made (and lost) on doom crying .  Doom is big business.

But if the doom happens at the end of the book, the book will be a vast disappointment to the Romance reader.

Some version of the doom may happen -- and in fact, should materialize because it takes "show don't tell" to communicate convincingly to readers.

But that is the pivotal MIDDLE of the story -- and the last half shows how people of determination, faith, good cheer, and above all optimism, overcome, avoid or stop the doom from affecting them and their loved ones.

The most important element in convincing readers that the Happily Ever After ending can and routinely does happen in Real Life is the writer's sense of optimism.

To convince yourself that doomsayers are scam-artists exploiting an element of human nature, trying to part folks from their money or resources, look at some recorded details of what actually happened after Doomsayers paid Publicists to spread the word.

Some of the Doomsayers are actually convinced, have credentials to support their opinion, and really -- really -- see the doom coming.  They are not just sincere, but have the best interests of their audience at heart.

What the audience needs to learn from reading Romance novels is that Experts don't know everything.  Humans can extrapolate trends that can be measured, but do not necessarily take into account human free will, and other elements of science that are unknown at their time.

Here is one example -- there are many!

The Population Bomb Has Been Defused
The Earth and humanity will survive as fertility rates fall almost everywhere.
By Noah Smith
469
March 16, 2018, 4:00 AM MST

In 1968, Stanford biologist Paul Ehrlich wrote “The Population Bomb,” warning that unchecked population growth would lead to mass starvation in the 1970s. He was just as wrong as Malthus. Global population did surge, but food production managed to keep up.

So far, those concerns seem to be unfounded. A decade ago, many believed that Muslim culture, with its emphasis on traditional gender roles, would defy the fertility transition. But then fertility rates in majority-Muslim countries plunged. Iran, Saudi Arabia, Bangladesh and Indonesia have mostly completed their fertility transitions, while Egypt’s and Pakistan’s are underway:

...
Of course, it’s worth noting that lower fertility won't immediately defuse the population bomb. The number of people in a country continues to rise for years after young people stop having lots of kids -- a phenomenon known as population momentum. Thus, the United Nations continues to project that global population will rise from about 7.6 billion today to more than 11 billion by the end of the century:

Other doom cries include the Debt Bomb, and things such as asteroid strikes because Nasa's CURRENT plan isn't big enough to deflect a strike due after 2100.

Straight line extrapolation of any trend always ends up predicting something that does not actually materialize.

Why don't these dooms materialize?  It's simple.  Love Conquers All.

Love catapults the most pessimistic type of person into a frame of mind to accept the possibility of success.  By shifting "mood" the human being can cause success.

Failure does happen - in life and in Romance novels.  Romance novels often start with a person at the bottom of total failure -- and they "get rescued" by some outside force or person.  Why is this popular?  Because it is real.  It does happen.

And it does happen on the largest, grandest scale - the scale that redirects human history.

Science Fiction Romance is about applying the principles of science and the study of our reality to the problems faced by our Spirits searching for a Soul Mate and an HEA.

Take your Characters through Experiences that allow them to define and achieve their own specific "happiness" criteria -- not a situation your readers want, but a situation the Characters need for fulfillment.

The initial key element in shifting the mindset of your Characters is the dawning realization that doomsayers are scam artists, grifters, exploiting the raw animal impulses built into the primate body.

Once they understand they are being victimized, they will stand up for themselves and avert the doom, or turn it back on the doomsayer.  But that will be convincing to your readers only if your own personal attitude (your Voice) is founded on this understanding of the nature of Doom.  Use Poetic Justice.

That Doom averting process is the main plot element in my novel, Zelerod's Doom. 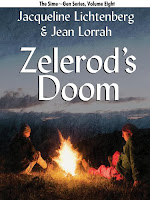 This attitude shift from pessimism to optimism is the core theme of Zelerod's Doom.