Sorting Out Your Story Line by Jacqueline Lichtenberg

Sorting Out Your Story Line
by
Jacqueline Lichtenberg

As I began studying how to write a story, I read a lot of issues of THE WRITER magazine where established, selling, writers explained how to do it.

The most repeated advice, which I also got from Robert A. Heinlein, and many others in Science Fiction, was just, "tell your story." And "start at the beginning."

Others taught how to just go on an adventure with the main character and discover what the story was, what would happen, and how the Character would learn from that -- essentially dredging it up from your subconscious as you type.

Today we identify two methods, plotter and pantser, those who think it all out ahead and then just write it, and those who write and then think.

Any given writer should be able to use either method on whichever project seems to require that method.  In other words, a master craftsman has master of his craft.

But if you are born able to do it one way, how do you learn to do it the other way?  How do you gain mastery of "art" which is rather chaotic by definition?

Fortunately, Television Series have provided a useful answer, and for the most part, not a painful one for writers to employ.

Just watch TV.  But do it with notepad in hand.

That was likewise the kind of advice I garnered from my earliest studies (Middle School age).  And I did it.

So when I watch TV these days, I see something wholly different than most viewers see.  When you can see it, you have a good chance of being able to do it (with some practice).

There is a TV Series titled, Motive, which is excellent for learning how to think about the story idea you have inside your mind, and how to unravel it into something readers could understand (and enjoy). 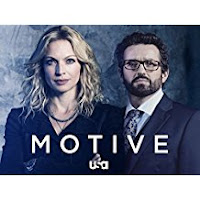 This is a crime drama, a police procedural by a team of investigators, who unravel a crime.
https://www.amazon.com/The-Vanishing-Policeman/dp/B01HY0MJZC/

It is open-form mystery.  The "killer" is clearly labeled for you at the beginning, way before the investigators figure it out.  The "victim" is labeled (they actually put the WORD by the character as the character is introduced).

This is a writing lesson writ large.

http://www.imdb.com/title/tt2443340/  -
notes all the awards this production has won, and also how the popularity steeply declined.  It is extremely cerebral, and plays hard on the emotions.

These emotions are rather dark, not the sort we would prefer in a Romance.

If you have not found this series "engaging" -- then it is even more perfect for learning this writing technique that writers employ before starting to put down any words, even the plot or story outline.

You write down the outline while you are sorting the story into a sequence that the reader can follow.

The story occurs to you, usually, for most writers, in a completely different sequence -- a totally useless sequence.

Most writers using a Plotter method straighten the story out from the tangled mess that occurs with the first, "I've Got An Idea" stage by using the PLOT.

By "plot" I mean the sequence of Events -- the scenes, what people DO and what those deeds cause to happen.

The Pantser, on the other hand, is presented with "An Idea" or maybe just a Character, in a mish-mosh blur of feelings, reactions to Plot Events, and reasons for those reactions by this Character.

How a Character responds to Plot Events delineates the Character -- shows and illustrates "who" this Character is.

For Science Fiction and for Romance genres (separately and mixed together) everything that draws the reader deep into the novel depends on "who" that Character is.

In science fiction, we look for a hero meeting up with something he can't handle, has never handled before, -- something unknown and unknowable.

The Hero Character feels that sense of dismay, astonishment, followed quickly by becoming intrigued and even delighted that here is something inexplicable that must be explained, conquered, and brought into harmony so that the threat is extinguished.

For the texture of that Science Fiction Hero response, just watch some episodes of Star Trek where Spock peers into his viewer and announces, "Unknown, Captain."  Just memorize the texture of his voice in that moment.

Science Fiction is all about adventuring into the Unknowable and making it Known.

Romance follows exactly the same pattern.  A Character meets "someone" - and recognizes an intriguing and impossible-to-know Person.  The Character dives (fearlessly or with immense trepidation) into this new Relationship and confidently or timidly unravels the impossible-to-know and gets to know it.

Each type of novel is a Learning Experience.

In Science Fiction we learn about the physical or metaphysical world, the "reality" that surrounds us.

In Romance we learn about the psychological and paranormal world that is inside of us.

Put the two together, and what you get is Great Literature Of All Ages.

The Mystery Genre is akin to the Romance Genre in that it often explores motivations for extreme deeds.  Marriage is an extreme deed -- and today, with more control over pregnancy and birth, deciding to have a child is an extreme deed.  Once done, it alters life forever, not just yours but the lives of those around you.

Life-altering deeds (plot = deeds) take courage to do, and sometimes even more courage to cope with the consequences.

So Romance novels require Characters who are Heroic - on purpose or by default, before or after the fact.

Exploring the Universe's Unknowables and making them known requires Heroism.

In both Romance and Exploring Reality, there is risk.  Those who Adventure sometimes fail.

Science Fiction publishers, just like Romance publishers, prefer stories that end in Success.  Failure is part of that, but it is the Middle or Mid-point of the page-count.  The story is about what the Hero learns from failing.

The TV Series MOTIVE, as you can see if you followed the link to IMDB above, was technically a failure with TV audiences.  It is of the more cerebral, psychological studies you find in very popular Mystery Novels -- and mystery is one of the best selling genres.  However, commercial Network TV requires a wider audience.

TV requires a "wider" audience because it exists to sell products, and the producers of products will pay more to reach a wider audience.  "Wider" means in age, education, taste, ethnicity -- everyone uses toothpaste.  To afford the overhead for a TV Series delivery, you have to entertain millions.

Books, on the other hand, can make a profit off of entertaining mere thousands.  And the hard truth is that only less than 10% of humans read fiction for pleasure -- and of that 10% only a tiny fraction want cerebral, challenging or abstract fiction.

Romance sells better than Science Fiction because you can tell a good Romance with just a couple of well known, common Ideas.  Personally, I find Romances with more substance (lots of Victorian era costume names, details on ancient dye techniques, Japanese Tea Ceremony customs - whatever) to be more enjoyable.

The "background" is mostly there for decoration, to enchant and delight the reader not grab the mind and make the reader pull out a calculator and figure out if the writer made an error in an orbital calculation.  (I like that kind of entertainment, too.)


A writer can learn to grab that kind of wide audience by studying a great TV Series that could not (quite) grab a wide enough audience for a TV Series.

Here is more about Motive
http://www.ismyshowcancelled.com/article/2016-03-31/usa-acquires-rights-to-motive/

It bounced around between different networks, and died in its 4th season.  It's a Canadian show, imported by various networks into the USA.

What does it lack?  Modern audiences prefer a faster pacing and less to think about, but more to just see.

Also modern audiences want suspense.  This show revealed the answer before asking the question -- many Police Procedural fans love watching the detective figure out what the reader already knows.

The TV Series, MOTIVE, was more story than plot, with the story carried on dialogue rather than on character actions and images.

Learn to untangle the story in your head into a linear sequence you can write (aiming at whatever medium you choose, books, short video, short stories, TV Series, Feature Film - any target delivery channel, even stage plays) by watching the TV Series, Motive, and taking notes.

It tells the story backwards, inserting flashbacks right in the middle of current-time scenes.

The team of investigators have complex relationships with each other that are likewise revealed in a mixed-up flashback kind of way.

By studying the order in which this TV Series presents information about the MOTIVE of the murderer, and listening to your emotions as you discover why this unpardonable act of Murder is completely comprehensible in your gut, you can teach yourself to sequence your own stories in ways that make better sense to editors who must reach a specific audience.

This TV Series, Motive, missed its target audience.  Figure out why.

It is a perfectly wonderful TV Series -- truly hit the target audience squarely.  But that audience just was not large enough.

Learn to understand how the writers took an ordinary Mystery, a Police Procedural, the kind of story that is normally a hit on TV, and twisted it around backwards, to tell the story in reverse order.

Now look inside yourself at all the stories you want to write.

Learn to outline them forwards, backwards and sideways.

Survey the commercial outlets you want to sell into.

Figure out which order those outlets present their stories in.

Remember story = what the Character learns or how or why, and plot = sequence of events on a because line.

Story and Plot are actually independent variables in fiction writing.

This TV Series demonstrates what happens when you detach story from plot line, tell one forward and the other backwards.

If the substance of the story were not murderous rage but burning passion, intoxicating hope for an HEA, how would you lay out the sequence?

You have to "show don't tell" who your Character is by the Character's reaction to a change of Situation.  Think of Spock looking into his viewer, "Unknown, Captain."  And think of a swirl of a skirt, a whiff of perfume, barely sensed by a guy sitting in a restaurant watching a woman leave.

Practice until you can switch between methods with barely a blink of the eye.

Master the craft of writing.