Here's a guest blog by Karen Wiesner, whose writing manual FIRST DRAFT IN 30 DAYS has been a tremendous help to me (Margaret Carter). It begins with a description of her latest novel, followed by Karen's discussion of the writing of the book and the development of the series:

Some doors, once opened, can never be closed again…

Orphan and widow Corinne Zellman is stunned when she receives several urgent letters from a lawyer, telling her she’s the only surviving heir of Edward Buchanan, a relative of her recently deceased husband. Though Corinne ignores the first few summons, too grieved to consider them anything but cruel hoaxes, she takes notice when yet another arrives, this time with a family ring identical to the one her husband wore and lost just before he was killed. Stuck in a dead end job and curious about the family the love of her life seldom spoke of, she reluctantly pulls up stakes and heads to Bloodmoon Cove, where the persistent elderly gentleman lives. There, with her best friend Ruby, she finds Crooked House, the family "estate". Crooked House certainly lives up to its disturbing name, as does Edward Buchanan, who is old and pale and disappears so frequently she can almost believe he's nothing more than a ghost. It isn't long before Corinne begins to suspect that her new family member had ulterior motives for insisting she come live with him. But to believe that is to believe that Rafe Yager, a hardened soldier, is entirely correct when he says Crooked House is dangerous. The longer she stays, the less chance she'll ever leave again.

Ghost hunter Rafe is one of the last descendants of the Mino-Miskwi Native American tribe whose elders disappeared during a ritual at their sacred place at the top of Bloodmoon Mountain. Rafe has come home based on a terrifying vision of wide-eyed, wholesome dreamer Cori losing her soul to an evil she doesn't recognize. Crooked House is falling and its sinister legacy demands recompense for her husband's death--something that was no accident, as she supposed. Can Rafe save Cori from a sacrifice she never meant to make when she unknowingly came to love a monster? 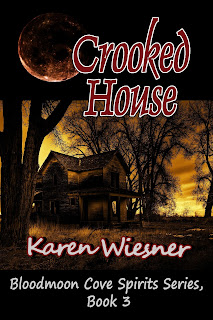 While writing up the proposal for BOUND SPIRITS, Book 1 of my Bloodmoon Cove Spirits Series, I had an idea about writing a series of ghost stories. I love scary, terrifying ghost stories as well as fun or playful ghost ones, but I also like the idea of exploring well beyond the boundaries of what a typical ghost story is. I intend to delve into the depths of supernatural elements with haunted places, cursed objects, portals to other worlds and/or time periods, and even unfathomable creatures from those other realms that have crossed into ours on Bloodmoon Mountain. This is what readers can expect all through this series.

I wasn't sure how to go about developing BOUND SPIRITS as a series until I realized another book of mine (which is a mild ghost story), THE BLOODMOON CURSE, was lagging with its at-that-time current publisher. I knew the town mentioned in that story, Bloodmoon Cove, would be the perfect setting for the series. Long story short, I got the rights back to THE BLOODMOON CURSE after BOUND SPIRITS was in the pipeline and was published by Writers Exchange. THE BLOODMOON CURSE became the second book in my Bloodmoon Cove Spirits Series, but I had to revise it slightly to make it fit this new series angle. From there, book ideas for this series have abounded in my imagination. Currently, I have nine books planned along with a collection of six shorts. You can find out more about them (including a sequel to THE BLOODMOON CURSE, coming early next year and titled RETURN TO BLOODMOON MANOR) here: Bloodmoon Cove

The basis of CROOKED HOUSE was formed when I had a dream long ago with a modern Gothic feel. In the dream, the heroine was visiting some obscure relative of her brand-new husband. When I woke up, I wrote everything down that I could remember on the off-chance that I might someday use it as a basis for a story. While I didn't use the idea verbatim, I was able to utilize parts of that dream for CROOKED HOUSE, the third title in my Bloodmoon Cove Spirits Series, which is newly available.

CROOKED HOUSE has a lot of the classic elements of a ghost story--vengeful ghost, haunted house, tough-guy hero and vulnerable heroine--with some unique twists and turns in the form of a cursed ring, a white-witch best friend who literally has no idea what she's doing, a ramshackle house in Bloodmoon Cove serving as a portal into the spirit world, along with a reluctant ghost-hunter that's one of the last descendants of the Mino-Miskwi Native American tribe whose elders disappeared during a ritual at their sacred place at the top of Bloodmoon Mountain a hundred years ago. That ritual ripped a hole in the mountain and let loose a flood of spirits that haunt Erie County. The heroine Corinne has come to Bloodmoon Cove with her best friend after being bequeathed her recently deceased husband's family estate, Crooked House. Cori hasn't yet realized the witchcraft that was weaved into the fabric of her life and she's only begun to wake up from the trance she's been in when she meets Rafe. In helping Cori break the curse on her stemming from the ring, Rafe may save himself as well.

Rafe and Cori's story starts in CROOKED HOUSE, but I wasn't ready to let go of them when I was finished with this tale, nor of an intriguing plot thread that actually started earlier in the series about a lawyer that caters to the dead with unfinished legal business. Rafe and Cori will make a generous appearance in Book 4, as all the other main and even some of the secondary characters from Books 1 and 2 will, but also in their own brand-new story, ELDRITCH JUSTICE, Book 9 of the series (release date TBA).

One of the things I love the most as I'm developing this series is that the characters from previous books make solid (i.e. not simply "glimpses" from one book to the next) appearances in later books. Considering how small the town is and how involved they are in each other's lives, it makes sense that the developing characters would be seen all through subsequent stories. I can hardly wait to write each one of these books and expand the world I'm creating with them. I hope readers will also be just as excited in seeing more from this series that's already getting five star reviews and has won numerous awards.

Creating realistic, unforgettable characters one story at a time…

Karen Wiesner is an accomplished author with 116 titles published in the past 18 years, which have been nominated for/won 134 awards, and has 40 more releases contracted for spanning many genres and formats. Karen’s books cover such genres as women’s fiction, romance, mystery/police procedural/cozy, suspense, paranormal, futuristic, fantasy, Gothic, inspirational, thriller, horror, chick-lit, and action/adventure. She also writes children’s books, poetry, and writing reference titles such as her bestseller, First Draft in 30 Days and From First Draft to Finished Novel {A Writer’s Guide to Cohesive Story Building} (out of print; reissue available now in paperback and electronic formats under the title Cohesive Story Building). Her third offering from Writer’s Digest Books was Writing the Fiction Series: The Complete Guide for Novels and Novellas, available now. Look for Writing Three-Dimensional Fiction: How to Craft Lifelike Plots, Characters, and Scenes Using Multilayered Storytelling from WDB, release date June 23, 2017 and available now for pre-order from Amazon.com: Amazon.com. Visit Karen's website at Karen Wiesner. Check out Karen's author page at Facebook, where you can like, friend and follow her: Facebook. If you would like to receive Karen’s free e-mail newsletter, Karen’s Quill, and become eligible to win her monthly book giveaways, send a blank e-mail to KarensQuill-subscribe@yahoogroups.com.

Posted by Margaret Carter at 8:00 AM