I have reviewed Gini's Alien series quite frequently on this Tuesday writing craft blog, so there is not much more to say than just, you must read this series.

It looks expensive until you note the size of the volumes - and the print is small, so you might prefer the Kindle or ebook version where you can make the print larger.

Unlike many of the science fiction novels or series I point you to, this one is actually in the Romance Genre.  The first books in the series are a "genuine" Romance in that the couple first meet, establish a Relationship (with some difficulties to overcome) then marry.  But the series goes on telling an ever more complex story of that Relationship as they have a child (half-alien hybrid), then another child -- both children very unusual individuals. 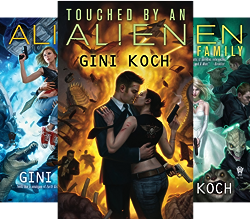 One of my most repeated caveats about this series is that the writing style is "loose" -- very often wordy, and the dialogue looping ( more like real speech than fictional dialogue).

However, the editing has tightened in the last few books, and this entry, CAMP ALIEN, does not seem to have editing errors of that type.

So reading the set all together, in sequence, should give you a very good bit of training in how to tighten your own narrative and dialogue, or at least take editorial direction without balking.

In addition, CAMP ALIEN is a walloping good read all by itself.  The one structural problem remaining is the plethora of characters - all of whom are instrumental in the plot, but most of whom are off stage while dialogue is used to fill the reader in on what happened in previous novels in the series.

I didn't have trouble following the wide-ranging scope of the characters and their sub-plots as the previous novels evoked those Characters strongly, vividly, and made them people to me. This effect is the signature of good writing.

In this volume, CAMP ALIEN is Camp David of international conference fame.

We started in the first novel, ALIEN, with an Alien guy who ran a small team of Field Operatives fighting non-human invaders of Earth, which the Aliens now see as Home.

They meet our main character, Kitty Kat, by accident and she leaps into battle beside them, earning her way into their ranks (to her dismay).  The Relationship progresses over the next volumes as they battle various threats to Earth, get married, have kids, and concurrently advance in rank, to be in charge of ever larger operations.

Eventually, they become Ambassadors from the Alien contingent on Earth to the US Government, move to Washington and live in a fortified Embassy there.  They get involved in Politics, and the Alien guy inadvertently becomes Vice President.  In the novel previous to CAMP ALIEN, the President (a Human) is murdered (along with most of the Cabinet and other officials in the line), and our Alien Vice President becomes President.

In this novel, old threats return in very plausible ways, and the battle to save Earth moves through international politics to Camp David which is nearly destroyed by the new combat.

Kitty Kat demonstrates how she uses otherwise mundane talents, plus a hint or two from another Alien, to combat the threats (from robots to androids to biological constructs) to save Earth time and again.

This volume is notable to Romance fans and those who want to write Action Romance like this because it focuses around a very typical marital issue - one which you would never expect this couple to have.

Kitty Kat is kidnapped (business as usual), swings into action, saves herself, saves several other groups who had been kidnapped (friends and allies of hers), finds a stolen airship armed with Alien weapons, recaptures it and heads on home.

She is confident she can land this airship where it belongs, at Andrews AFB.  She radios ahead for landing permission and hits a brick wall of "you are not authorized."  Then big guns are trained on the airship.

By the time she gets that straightened out, she is so mad at her Husband The President for shutting down her authorization to land that she threatens divorce, and declares her airship a sovereign nation (only half joking! Maybe less than half.)

She is beyond furious because she feels betrayed.

Eventually, after much more action, she gets the whole story of why her husband did this to her.  And she's even more angry, because he did it because he believed a video showing her captured, maimed and tortured and begging him to come save her.  She has never, in all their adventures, done anything like that.  She's saved him a number of times.  She had assumed he understood her Character, Capability and Soul well enough to view that blackmail video with suspicion.

When she sees the video, she points out the clues that it is fake, and the being tortured and dismembered is not her, but a copy of her. (copies of people are common in this whole series -- they should have expected it.)

Her husband and the men who believed the video was real are shocked, contrite, apologetic, groveling, and most terribly, gut-wrenchingly ashamed of themselves.

In real life, of course, this would never happen.  The men would justify their error to themselves.  But with 12 other very long novels behind us, we believe these men (particularly Kitty's husband) are reacting in character here.

Moreover, Kitty herself believes their error was well within plausibility after she sees all that went on while she was conquering her kidnappers.

This depicts a marital spat over a very common Relationship problem, and makes you believe every word.  But it is science FICTION -- very fiction, though the psychological science is right on the button.

In the end, Kitty's sovereign nation grudgingly rejoins the United States and Alien combine, makes interstellar peace and maybe peace in the Middle East as well.  And you'll believe every word while laughing your head off.