The latest episode of MY LITTLE PONY: FRIENDSHIP IS MAGIC offers an interesting example of applying fantasy to real-world geopolitics—a "ripped from the headlines" story—with no explicit mention of actual events or peoples. In "The Times They Are a Changeling," Princess Twilight Sparkle travels to the Crystal Empire to visit her brother and sister-in-law (the prince and princess of that kingdom) and their baby filly. Twilight's assistant, young dragon Spike, accompanies her. The capital of the Crystal Empire is in the grip of paranoid fear because a changeling has been glimpsed in the area. Spike, who became a hero among the Crystal ponies on a previous visit, joins a squad of guards searching for the creature. Getting separated from the group, Spike stumbles upon the changeling and discovers that the terrifying monster, named Thorax, isn't a threat at all. In fact, the "monster" saves his life. Parasites who feed on love, changelings infiltrated Canterlot (capital of Equestria) in a former episode, their queen disguising herself as the Empire's princess—hence the Crystal ponies' state of high alert. But Thorax left the changeling country because he yearns to experience friendship without devouring love-energy in a destructive mode. If he can make friends, generating enough love in such relationships that he won't "starve," maybe he can rise above his nature and cease to pose a threat to others. Spike welcomes him as a potential friend, introducing him to Twilight and some of the Crystal ponies in the guise of an ordinary pony. When Thorax accidentally gets exposed, Spike fails to stand up for him. Realizing how he has betrayed his would-be friend, Spike goes after Thorax, persuades him to give friendship another chance, and changes the other ponies' minds about their belief that "there's no such thing as a nice changeling."

In the MY LITTLE PONY universe, a changeling is a creature that can disguise itself in the form of any other person (pony, dragon, etc.), what the D&D game calls a doppelganger. In folklore, changelings are fairies left in place of stolen babies. In some cases, adults could be suspected of being changelings, too. An Irish woman, Bridget Cleary, was burned to death in the modern, civilized year of 1895 because her husband claimed to believe—apparently sincerely—that she was a fairy changeling; by killing the substitute, he expected to get his "true" wife back. The MY LITTLE PONY concept and the folklore concept have one factor in common, that changelings can infiltrate normal society by posing as "one of us." Because they look like "normal" people, only constant vigilance can guard against the danger they present. 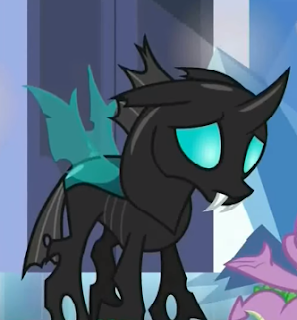 Just below the surface, "The Times They Are a Changeling" fits into the "good guy vampire" subgenre. Thorax fights against his predatory nature to find happiness through friendship. At the next layer down, though, it's a story about what terrorist threats do to individuals and societies. Because the changelings attacked in an earlier episode and almost destroyed the Crystal Empire, the Crystal ponies have become so paranoid that at first they suspect Twilight and her companions of being changelings in disguise. The citizens of the empire are determined to keep all changelings out, making no distinction between the evil ones and those who might be harmless. This climate of suspicion and fear leads Spike to turn against Thorax instead of supporting him at a critical moment. When the majority demonizes all members of a different nation or culture, it's hard to speak in defense of them.

The message of this episode isn't totally unproblematic. While Thorax wants to be "good," it's clear that all the rest of the changelings (all whom we see, anyway) really are dangerous, amoral predators. He's presented as more of an exception than an example. However, the ending offers hope that other changelings can learn about friendship and alter their world-view and behavior, just as Thorax has done. Evil isn't necessarily an essential part of their nature. On the level of the show's target preteen audience, this episode conveys yet another message about friendship overcoming differences. Adult viewers can perceive (or not, as they choose) deeper layers of applicability.

Email ThisBlogThis!Share to TwitterShare to FacebookShare to Pinterest
Labels: My Little Pony: Friendship Is Magic, psychic vampires, Ripped From The Headlines, Terrorism