Reviews 24
by
Jacqueline Lichtenberg
Alien In Chief
by
Gini Koch

There are 11 prior posts where I mention or discuss Gini Koch's Alien Series.

I have included spoilers below but these are the kind of novels that you can't spoil by knowing what will happen in advance.

Gini Koch has indeed been extremely prolific, and in the process of telling this long, complicated story, with many characters,  interstellar settings, and science tantamount to fantasy, she has become a much better writer.

The most bizarre setting Gini Koch has tackled has been Washington, D.C. complete with "wives" club to instruct spouses and establish the social whirl, all the way to vociferous (sometimes dangerous) picketers on Embassy Row.  So far, only K Street has been treated from a great distance, an occasional Lobbyist mentioned

If you step into this series with Alien In Chief, then go back to read the first one, ALIEN
http://www.amazon.com/Alien-13-Book-Series/dp/B014J8VFNY/
you will see the styling difference immediately.

If you read my reviews of these (terrific) novels, you will note I highlight the wordiness and "loose" styling.  The proportions in terms of words spent dwelling on this or that, the repetition of points, slowed the pace and vitiated the penetratingly vivid characterizations.

Little by little, that effect has been tamed, and this book ALIEN IN CHIEF, zips along at the pace of events without awkward pauses.  The improvement makes it easier to follow the action and the motivations. 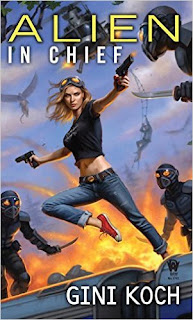 ...which details the events that we have seen coming for several books now as the bad-guys close in.  Finally, the ultimate doomsday weapon is deployed, a disease that takes down a trainload of high USA government officials.

Jeff, Kitty's husband the Alien we met at the beginning of Book 1, has been Vice President for a while.  Kitty, a human with altered DNA, has been the Ambassador to Washington from the AC Aliens.

Now, at least for a time, Jeff becomes President of the USA and Kitty has to drop everything to become First Lady.

Given what we know of her personality from the previous 11 Books, this will be a unique era in American history.  Already, she has taken the field, kicked butt, vanquished villains galore, managed media relations, and survived a bout of plague.

This is a science-fiction-urban-fantasy blend with strong elements most beloved in the Video-gaming and Comic communities.  But the blending is seamless, from Book 1 onward.

And yes, it is your favorite kind of series -- Human/Alien Romance where all the sex scenes are supercharged.  (And don't forget, they now have 2 very young, very precocious children who won't stay out of Adult affairs.)

I'm sure a lot of fans will want to duplicate the music playlists Kitty uses to inspire her fighting style, wishing that a super-alien would jigger the song sequences to give clues about what's about to attack.

And that's the only advantage Kitty has, a clue, not an actual briefing full of information.  She does have her altered DNA which gives her some Alien powers, but in this novel we see how she performs when these new powers fade away due to the disease.

As we come to the end of ALIEN IN CHIEF, we find the well known characters discussing who should be Vice President and who should take over the C.I.A.  Meanwhile, they are hosting a delegation of Aliens from a coalition of planets far-far-away, planets Kitty & Company saved from a brutal civil war.

There will be Washington Parties to inaugurate the new President, and there will no doubt be vigorous opposition to an Alien presiding in DC.  There might be a few left-over villains and a number of mysteries which, when solved, will create greater perils.  And since they saved a lot of humans who had caught the plague, there may be after-effects of that plague that appear later -- it was synthesized using some DNA from some as yet unknown planet.  Yes, it's a space plague.  You have to read this book to believe it.

Read these novels anticipating great, good, rollicking fun, and you won't be disappointed.

Posted by Jacqueline Lichtenberg at 3:37 PM