Reviews 21 - Douglas Adams and Doctor Who by Jacqueline Lichtenberg

Reviews 21
Douglas Adams and Doctor Who
by
Jacqueline Lichtenberg

Today we'll look at a novel made out of a Doctor Who script, which is perhaps one of the most famous Doctor Who episodes, CITY OF DEATH.  It is wry-serious-science-fiction humor, accidentally written by Douglas Adams when he was script editor on the TV Series. 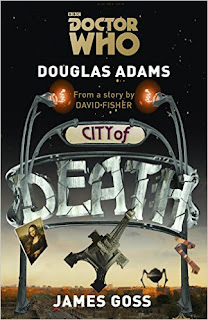 Does any woman, teen to elderly, know any figure more "romantic" than The Doctor?

In most all his incarnations, The Doctor has it all.

I seriously doubt the originators of this kiddie Radio/TV Series (complete with no budget, cardboard sets, and actors knowing they were playing to a kid-audience) had any intention to create a Heart-throb.

Yet most women who watch a few episodes (for me, it's Tom Baker's Doctor) want to become a Companion.

We would be willing to fly away through time and space with The Doctor.

For those who don't know, The Doctor is a Time Lord (not human) and Romana is a young, female (just over 100 years old, hardly an adolescent) genius Time Lady.  The Doctor is fascinated by Earth's humans and does his best to defend us, often picking up Companions to travel with him away from Earth, then bringing them back to their own time and place.

When The Doctor dies, he "reincarnates" -- comes alive again in a changed body (because they change actors, they invented this gimmick and now they're stuck with it.)

Reincarnating is one of the most fascinating attributes of the Time Lords.

So not only do most of the really great actors want to land the part of The Doctor, but the best of the writers gravitate to this program.

At one point in his early career, Douglas Adams (yes, that writer) was Doctor Who's script editor, and when the script, CITY OF DEATH was being developed, all chaos broke loose (as usual in TV), and the script editor saved the day by writing the actual script for CITY OF DEATH.

This story is told in the author's afterword, and the author is James Goss, who converted a version of the script (pre-broadcast version) into a book that is very readable.

It is full of The Doctor's famous scarf (Tom Baker's signature), Romana's famous immature and innocent genius, and situations threatening all human history.

Yes, this was a kiddie show, but the kiddies grew up and so did the show right along with them.  Much of the humor is adult, not a lot of sexual innuendo, but many allusions to issues pertaining to adult life (such as an unhappy marriage).

This particular series of episodes presented in this book are set in the city of Paris, 1979, with running commentary on famous features of that city.

It has all the pacing hallmarks of great episodes of Doctor Who -- chase scenes, plot-twists, developments that bewilder the doctor, moments when he catches on faster than others, and moments when Romana is ahead.

The narrative ranges over several points of view, and the points are in the plot.  The dialogue is important (to me) and James Goss who converted the screenplay format into narrative did an excellent job blending action and dialogue with inner thinking, showing how people figure things out when they are looking at them.

This book is a fun read -- breezy, quick, and you just smile your way through it, whether you've memorized the broadcast episode or not.

You can buy the DVD, or find it in various forms.

Here is the Wikipedia entry on this serial:

It was the second serial (Doctor Who is broadcast in half hour segments, with longer story arcs of several or many episodes.

This book contains the entire story arc of the second serial of the 17th season.

It has no Romance, but it strips the Gorgeous Hunk template down to the barest outlines.  If you want to write novels that contain an implicity rather than explicit answer to the question, "What does she see in him," read and analyse this book, which differs a little from the broadcast version.